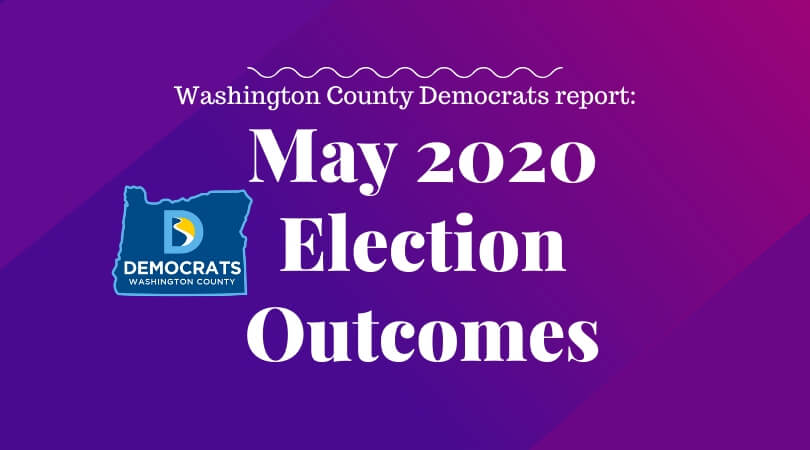 By Martita Meier, Vice-Chair of the Washington County Democrats

Thank you to all of you here in Washington County that voted in our May primary and local elections! Despite our hands being tied in many ways due to the crisis we are all living through, it is exciting to share that the neighborhood leader program was still able to make a difference through sharing postcards and making phone calls.  119 neighborhood leaders were active in this cycle and the overall percentage bump for Democrats who were nested within a neighborhood leader turf showed an increase in voter turnout by 9%!

Where neighborhood leaders indicated that they had sent out a postcard, the increase in voter turnout was just over 20%!

We need to all take that as a lesson–even a little bit of effort makes a huge difference. Every neighborhood leader crafts their own way of being in contact with their fellow Democrats within their neighborhood turf. So even when we can canvass again, you can continue to cultivate those relationships through the mail and via phone calls as well, in combination with knocking on your neighbor’s door. The point is if you want to make a real difference in moving progressive values forward in Washington County, Oregon, the easiest way for you to do that is engage in the neighborhood leader program!
Turnout for Washington County looks to be about 46% for Democrats. For a primary local election, that is huge! Let’s do everything we can to keep our fellow Democrats engaged so we can continue fighting for civil liberties, women’s rights, and environmental protections!

You can see the full results of the election here >

For this election cycle, the Washington County Democrats endorsed 8 candidates and took an endorsement stance on 4 measures. Let’s take a look at how they did:

That first zero might seem like a tough pill to swallow, but remember, when we run local elections and you have three or four candidates running, it’s very uncommon to have outright winners in May.

The candidates who will be moving on to runoffs in November are Nafisa Fai, Lacey Beaty and Gerritt Rosenthal.

Nafisa Fai is looking well poised to win in November. She was running against two other candidates, both of which have conservative leanings. However, the candidate that we were most concerned about knocking out of the race was Manuel Castaneda. This is because Manuel was looking to give the impression that he had values that he doesn’t really hold. Manuel has been a lifelong Republican and in this election, 10 days before he submitted to run, he changed his voter affiliation to not affiliated. You can read more about him here. So what’s really important is he is out of the race! That is a huge win for Dems and the Nafisa campaign!

The race for the mayor of Beaverton was going to be a tough climb. Two of the members of Beaverton City Council ran against incumbent Mayor Denny Doyle. In a scenario like this, it is going to be tough to knock out the incumbent because the vote gets split three ways. It is exciting news to announce that Lacey Beaty pulled in just shy of 35% of the vote! Even though she was trailing Denny, he did not pull in enough votes to win the mayoralty outright in the May round. Lacey will face off with Denny in November.

A big congratulations to Lacey for fighting hard despite all of the setbacks during this election cycle, and for staying in the game. One of the hardest things about nonpartisan elections for voters is that, on paper, the candidates can hold very similar values. This race will end up being about who the people of Beaverton believe will work the hardest to see those values come into fruition. The Washington County Democrats endorsed Lacey as a candidate that they believe will fight the hardest to move our progressive values forward.

I’m going to take a quick detour away from candidates and talk about ballot measures. The two levy renewal ballot measures passed.  These levies will continue to fund local libraries (34-297) and public safety (34-296).

We are also excited to see that measure 26-210 to tackle homelessness in a more effective manner won the day. This means we can more actively shift funds towards local groups to help the homeless and make a difference.

https://www.beavertonoregon.gov/2346/Ballot-Measure-34-298. Farrah did a great job outlining our concerns regarding this measure and you can read about that here. It was never a case of the Washington County Democrats thinking that everything being proposed was necessarily ‘bad’ … our big concern resided around the fact that this was put together in a very swift manner, without really doing enough to pull in the public to make this revision the best that it could be. This is an essential change to the fundamental structure of Beaverton local government, and it will impact the role of the mayor, whoever that turns out to be after the November election. This measure did pass, and it will mean that the mayor’s duties will take on a very different look coming in 2021.

Gerritt was also in a multi-candidate race and came in with the second strongest pool of votes. As he was going up against Tom Anderson, this is a huge shift in the right direction. Tom is a much more established politician in the local area, and Gerritt only trailed him by a few points. Having the opportunity to go against him head-to-head in November will give Gerritt the chance to truly show his fellow Oregonians that he is the perfect fit for this role. You can read more about Garrett and why he’s such a strong candidate here. Let’s help him win in November!

The Washington County Democrats did a big push to try to help turn out the vote for Red Wortham for Sheriff. Red was facing off against a longtime incumbent, and it is not easy to take a win in that scenario. Red pulled just under 31% of the vote. It was also an uphill battle for Red due to the number of endorsements that our current County Sheriff received from fellow electeds. The current Sheriff started seeking these endorsements very early, and by the time Red threw her hat in the ring, she was very far behind in the race to gain these endorsements for herself. We and many others hope that Red will run again in the future.

Learning the lessons from this race and seeking endorsements early could make a pivotal difference next time around. The Washington County Democrats endorsed Red Wortham because she is passionate about social justice reform and has shown to be truly committed to Oregon as a sanctuary state, and, what that means for our fellow immigrant Oregonians who can be affected by the current tide of prejudice we have seen in the Trump administration. It is now our job, as fellow members of our County, to speak up when we see these values not being upheld. Red, we hope to see you run again!

Our neighborhood leaders sent postcards and made phone calls for all eight of our endorsed candidates. Some candidates had an uphill climb to make, running against longtime incumbents, and running against some tough opponents! We want to congratulate all of the candidates for working hard and fighting for progressive values! We truly hope to see you all again on the ballot!