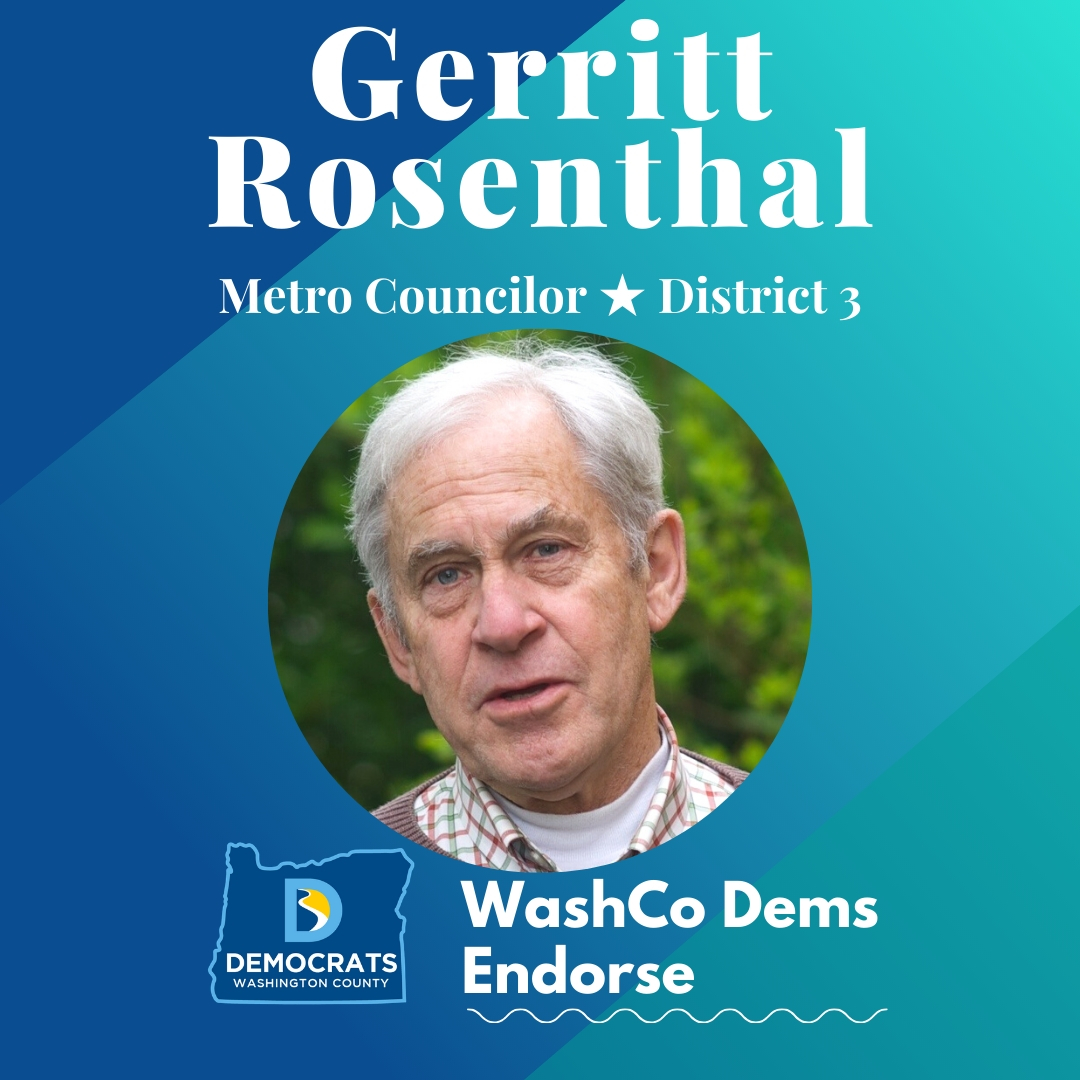 WCD: Hi Gerritt, thanks so much for taking the time to talk to me today, and congratulations on your endorsement! I know that you’ve got a very busy schedule and that running for office is hard, so I want to jump right in.

The first question that we like to ask all of our endorsed candidates to discuss is what inspired you to run for Metro?

GR: I was inspired to run for Metro because I’ve been concerned about Regional Government for a long time. Ever since I worked at the Lane Council of Governments (L-COG) as a Water Resources Program Manager in the Eugene-Springfield Metropolitan Statistical Area.

I have been convinced that the economies and the benefits of thinking in a Regional sense are very important, and I’ve lived in this area for 28 years. This isn’t my first time running for a seat at Metro. I actually ran four years ago, but I got a late start. When I heard that the incumbent wasn’t running and there was going to be a vacancy, I decided to try again – this time with the proper amount of lead-time. I have the skills, the knowledge and the experience, and it’s a job I think I would do well, so that’s what inspired me.

Regional government is different than City or County government, because it has to be more collaborative and cooperative. It ties things together, and frequently you are working to convince people of the need to do things and get them on board, rather than just take a stand on your own. I think regional governance is what evolves us beyond just a being a group of cities into having very a significant regional identity, and Metro is a great place to deal with regional issues.

Metro (which used to be called CRAG) is unique in our country. All other councils of government e.g. Lane Council of Governments in Eugene-Springfield) are voluntary – Metro is the only one with elected officers. In other areas, cities pay dues to support the regional government, then the regional government hires a manager, and there’s an oversight board provided by the cities. Metro is the only one with directly elected members.

WCD: I’m going to admit some ignorance here, as I’m new to Oregon. I’m thinking some other readers might not know the answer to this either, so I’m just going to ask… can you explain what Metro is?

GR: Metro is the regional coordinated transportation planning agency. It’s the agency that the federal government looks to to distribute money. They write the grants and distribute the money, but it has to be agreed upon by all of the parties.

Metro has 7 major areas it deals with (and not all of them were in the original charter):

WCD: What kind of changes do you think are necessary to adapt to the changing demographics of Washington county?

GR: We need better representation of the rural areas – they didn’t used to be included – everything that happens in Beaverton and Portland affects so many other communities, and vice versa. As our region continues to grow, it’s important that all of our diverse neighborhoods and governments work together.

And one other thing, we’ve become a much more diverse cultural region, and equity issues have become a much more important aspect of our regional government. Some times that means serving multi-ethnic communities (including Latinx or black neighborhoods), other times it means helping to assist areas where some of the people are much poorer than in other parts of the region. This has become a much larger, and growing challenge.

All of this means that equity issues are much more important, and serving all of the communities needs to be more of a focus.

WCD: What can we do here locally or in Oregon, and specifically what can you do from Metro, to best impact climate change in a meaningful way?

GR: Metro has a limited ability to affect climate change directly, as they don’t have legislative power. Metro has supported the Carbon Cap and Trade Bill, and Green Jobs Initiative, and they have a “Climate Smart Strategy,” which is proactive and encourages cities to get behind climate smart actions. Still, most of the action is going to be at the city and state level, and Metro’s role is primarily to support what gets done there, but they can’t control what cities do.

Despite all of that, there are still a few things that Metro can do:

WCD: I’m studying sustainability at PSU, and you mentioned Solid Waste Planning, and I know that Oregon has a “Water Myth,” in that – despite all of the rain in parts of Oregon, a lot of our state is still very dry and has some looming water shortages. I know that there is action to make sure we don’t experience droughts like California recently has. Does Metro have any oversight on regional water supply and/or usage?

GR: Metro does not have authority in water supply or ground water protection (which has been dominated by the Portland Water Bureau and the Department of Environmental Quality [DEQ]). Some might argue there would be a benefit in Metro bringing some oversight and/or providing some coordination on regional water issues, but that is not currently one of the things that they do. I have expertise in that area, given my prior work history, but that is not something Metro would be doing at this point in time.

I have to add, there’s a lot of history between the Portland Water Bureau and the other water districts.

WCD: Yeah, we’re only two weeks in, and we’ve covered some of that in my class. I also wanted to ask a follow-up question, given that one of the things that you mentioned was Solid Waste Planning, do you have any thoughts or would Metro have any impact on “Grey Water” systems, maybe using excess water from bathroom sinks to fill toilets, etc?

GR: Again, Metro doesn’t deal with that, it’s up to the cities, or Clean Water Services. The problem is that many of them would require separate piping systems. It can be done in certain institutional systems, for example, you can take the grey water, and develop a filter and use it for lawn watering. I have to say that I have friends who have developed separate grey water systems, but fortunately or unfortunately, Metro is not involved in that.

WCD: I expected as much, but I figured I’d ask. On a more immediately impactful note, given the recent healthcare crisis we find ourselves in, if elected, what would you do to better promote healthcare for Washington county residents?

GR: Again, that’s a difficult question from a Metro standpoint, as it’s not really our wheelhouse in general. but Metro has some regional disaster coordination responsibilities, so you could make an argument that Metro could be more responsible in disaster and pandemic response planning, but that is not a role that it has had historically. It really has left healthcare to the counties, states, and the independent organizations.

I would be open to looking at regional pandemic planning as something that Metro could do to assist in a uniform approach throughout the region, but it is not something that is currently in their playdeck.

What they do is to help the counties with transportation and they’ve also supported the efforts by closing their performance venues. Personally, I have worked to get better funding for regional health centers, but not through Metro. I would take the position that it is something Metro could do to make things a little better coordinated, and I’d be willing to try, but there could be a lot of political pushback on that.

WCD: You did mention that Metro is working to address people experiencing housing insecurity. I’m wondering if that’s another angle of entry for them to have some impact on the healthcare system.

GR: Yes, it is, and Metro is proposing Ballot Measure 26-210 this May to generate a marginal 1% tax on people making over $125,000 ($200,000 for married couples) and businesses that have more than $5 million in revenue. Metro wouldn’t spend the money, it would allocate the funds to the counties, and the counties would allocate the money to Nonprofits and/or housing authorities. But, there is pushback on this. Some say it’s an overstep, that Metro is getting too far into the housing business and they should stay out. Others say that housing our citizens is a regional problem, and we need someone to coordinate it on a regional level. I agree with the latter, and I have supported the bond issue, as have the WashCo Dems. This is a difficult time, but homeless people are vulnerable every day. Have I said this clearly?

WCD: It is perfectly clear, Is there anything else that you’d like to mention?

GR: Metro needs to be an overseer of the Columbia River Bridge planning and implementation. ODOT will do an engineering solution, PDOT has too much of a local focus, and Metro brings a regional perspective. I feel Metro can coordinate – like they already do – with Clark County, our neighbors in Washington State.

I think we need to replace the bridge and we need to do it in coordination with Washington State. We need to increase transportation safety, support alternative vehicles, and protect neighborhoods. But, it also should be a marquee for the area, like the Golden Gate in San Francisco. The Columbia River between Oregon and Washington is the most important river west of the Mississippi, and it’s the most iconic piece of geography in our region. I think we need to honor that, and the salmon fisheries.

My concern is that a couple of years ago, ODOT led an effort to plan for a new bridge crossing. It was structurally sound, because they’re very good engineers, but ultimately It failed because they didn’t reach out to all of the stakeholders. When it was time to launch the project, the neighborhoods were unhappy, the environmental community was unhappy, and Vancouver was unhappy. They are good at engineering things, not bringing in a broad range of stakeholders. In the end, it can’t be blamed entirely on ODOT, because there were Washington State politics involved too… which is just another reason for a political body that is used to bringing together multiple stakeholders to be leading the effort.

Meanwhile, PDOT is focused on Portland, but The Columbia Crossing has a regional and national significance. Metro regularly works with all of the people involved locally and has connections to the national government.

The key takeaway is that Metro’s role has not been fully defined yet.

GR: Just that I’m a strong supporter of unions and of living wage jobs. I think Metro has a pretty good record so far and it’s important that they continue to support its employees in everything that they do.

Learn more about Gerritt Rosenthal at his campaign website.