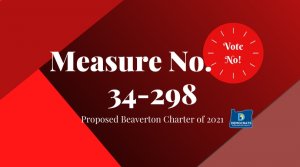 WashCo Dems join SEIU Local 198, the Beaverton Chamber of Commerce, and the Pamplin editorial board in opposing the Beaverton Charter Measure 34-298, which replaces the current city charter.

There is no urgent reason to pass this amendment. But there is reason to hold off on a measure that attempts to address multiple issues with hardly any public input.  Although some people may support parts of this proposed new charter, we cannot ignore the fact that the council referred major changes to the 40-year-old charter in a six month period without the voice of the people.

There are several changes to the Beaverton city government, including:

–    Change the form of government from strong mayor to council-manager

–    Make the mayor a voting position

The major change is the form of government. Beaverton has what is known as a strong mayor, or mayor-council, form of government. Currently the mayor is elected and acts as chief executive of the city, responsible for the hiring, firing, and direction of staff.

The new charter proposes a shift to a council-manager form of government, where an unelected city manager is appointed by the mayor and council, and takes on the responsibility of running the city.

There are pros and cons to each form of government, but many people are still unclear which form is better suited to the City of Beaverton. This is a major adjustment that should not be quietly referred to voters without outreach and education. Even the city employees’ union states in their opposition that they were not consulted. The city prides itself on its ability to solicit input from the public when undertaking projects and plans for the future. They have successfully surveyed thousands of residents over months and years to provide input on multiple plans. There should be similar efforts to identify community concerns and attitudes related to the foundation of the city government.

Aside from the content of the charter change, the timing is also questionable. During the only two public hearings on the matter, the city council heard from concerned community members in January that this change was moving too quickly. Residents, activists, the Chamber of Commerce, and the local paper all agreed the city should consider changes, but on a longer timeline to increase public participation and avoid changing the job description for mayor in the middle of a mayoral election. Despite this, the city council approved the ballot referral in February without any further discussion.

For historical perspective, the new charter was adopted in 1980 after residents became frustrated with the unelected nature of the city manager position. The switch to a strong mayor form of government was approved after Beaverton elected the first woman to serve as mayor. But because she was elected under the old charter, she could not be sworn in and was unable to serve in the role for which she was elected.

This new charter amendment comes to voters at the same time another female candidate for mayor poses a formidable challenge to the incumbent. Why do strong women keep getting pushed away from strong mayor positions in the city of Beaverton?

Changes to the city government are worthy of discussion and debate. What we do not support is rushing through changes that are this substantial without the public vetting that the city is more than capable of conducting them.

We urge Beaverton voters to say no to the Beaverton Charter Amendment Measure 34-298.