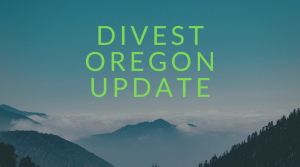 The Divest Oregon coalition continues its work toward three demands:

• Immediately: No NEW investments in fossil fuels since they pose a financial, health, and climate risk to Oregonians.

• Annually release a public list of all portfolios holdings in every asset class.

• By 2026: Transparently phase out all CURRENT fossil fuel investments and move to climate-safe investments, using a social justice framework that accounts for the climate impacts on frontline communities across the state, including rural communities and communities of color.

Shifting Oregon Treasury holdings from risky fossil fuels to climate-safe investments increases our resiliency as a people and as a state.

The OIC (Oregon Investment Council), of which Treasurer Read is a member, did the opposite. According to the industry journal, Pensions and Investments article, “Oregon doles out $1.4 billion in commitments” the OIC approved at least $650 million in new investment commitments to private equity firms that are deep in the fossil fuel industry. The commitments included $250 million to Quantum Energy Partners VIII and $200 million to RGP Royalty Partners II — both aimed to become investments in oil and gas. Other notables are $100 million in Brookfield Super-core Infrastructure Partners which owns 19.9% of the energy transmission subsidiary of FirstEnergy which provides electricity in 6 states produced 89% by burning coal, $50 million in Stonepeak which was ready to fund the construction of the Kalama methanol refinery and invests in fossil fuels like Dominion midstream, and $50 million in EQT Infrastructure V. EQT Corporation is the largest producer of natural gas in the United States according to their website.

Additionally, the Oregon Treasury is investing in a devastating pipeline in Eastern Africa (EACOP) with PERS money. See this excellent video Down the Line (6mins) about EACOP directed by Divest Oregon Communications Director Andrew Bogrand.

When challenged in the past about their priorities, the OIC claims to be integrating environmental, sustainability and governance risk factors (ESG) into its decision-making, and highlights that they had more than $800 million invested in renewable energy in 2021. That figure pales in comparison to the $5.3 billion, and growing, known investments in fossil fuels. When will their actions align with their claims?

2. Annually release a public list of all portfolios holdings in every asset class.

Transparency from the Treasury is the first step in addressing the risks of climate change to Oregonians. Evaluating the climate risk of investments is crucial in order to make a plan to address those risks.

HB 4115, the Treasury Transparency Bill, was introduced in the 2022 short session. The bill was written to mandate that the Treasury disclose all of the assets they manage. Prior to the drafting of this bill the Oregon Treasury did not list public equity or fixed assets investments on their website. After Divest Oregon filed a public records request AND got a bill submitted to the legislature, the Treasury posted the investments in the two missing asset classes.

The Treasury Transparency Bill did pass the Oregon House but ultimately ran out of time and did not come to a vote in the Oregon Senate. Divest Oregon continues to pursue the goals of the bill through other avenues.

Based on the information received from the Treasury regarding their current investments, Divest Oregon released “Risky Business: Oregon Treasury’s Fossil Fuel Problem”. This report details the investments in fossil fuels made by the Oregon State Treasury that are known to the public, and outlines how continued support of the fossil fuel industry by the state exposes Oregonians to climate and health risks, economic cost, and financial risks. “Risky Business” reveals how the Oregon State Treasury has at least $5.3 billion invested in fossil fuel companies with over $1 billion invested in the coal industry alone.

“This report from Divest Oregon makes a moral and compelling economic case for divestment from fossil fuel. The authors of this report show that fossil fuel investments are not economically viable or profitable in the short, intermediate, or long term,” said Dr. Idowu Jola Ajibade, Assistant Professor in the Department of Geography at Portland State University. “Recent investments in this industry have delivered terrible returns, leading to the loss of billions of dollars and this trend could worsen in years to come. In the past two decades, Oregon has experienced the devastating impacts of climate-related hazards on communities and fragile ecologies and these are reminders why divestment from fossil fuel is a crucial step toward climate mitigation.”

In light of the risks posed by fossil fuels, and the associated loss on investments, the report recommends that the Oregon State Treasury 1) stop all new investments in fossil fuels; 2) annually release a public list of all portfolio holdings in every asset class; and 3) phase out all current fossil fuel holdings and move to climate-safe investments, using a social justice framework that accounts for climate impacts on frontline communities across the state, including rural communities and communities of color.

Send an email, letter, or call your Oregon Representative and Senator to let them know you think it is important that they read Divest Oregon’s Report — Risky Business: Oregon Treasury’s Fossil Fuel Problem, and urge them to support the Divest Oregon movement.