Imagine you made $50k/year and had a very tight budget for your finances to make sure you paid all of your bills and didn’t go too far into debt? Now, pretend that at the end of the year you discovered you had an extra $1k (that’s 2% of your annual salary) left over. Would you give the extra $1k back to your employer?

What if you did give the $1k back to your employer because it’s more than you had budgeted for (so why not?) …and then you got laid off, and fell into a financial crisis. Don’t you think you’d be “kicking” yourself for returning that $1k? Well, if that happened once, would you do the same thing again the next time you made more money than you anticipated?

This all sounds crazy right? Unfortunately, this is exactly what the State of Oregon does and the policy is called “The Kicker.”

If you live in Oregon, you’ve probably heard the reports of how “The Kicker” is Oregon returning excess taxes to its constituents. While that’s technically true, it’s not the full story. What it actually does is take any excess funds raised during a time of prosperity and returns them to the taxpayers, rather than save it for a potential financial downturn or invest it in projects that are constantly overlooked or under funded.

In the four decades since enacting this policy, it has “kicked” Oregon citizens while they were down almost 50% of the time. The reality is, in a state with one of the best, most progressive tax policies in the country, The Kicker stands alone as an abomination, and it cripples the state’s finances.

According to the ​Legislative Revenue Office, a non-partisan legislative service agency: “The largest personal kicker refund was returned to taxpayers following the 2005-07” tax years;” and, if you recall, December 2007 was the start of The Great Recession. Which means, while Oregon was staring into the face of the biggest financial downturn since The Great Depression, instead of saving the excess funds that the state would need to fund services, the government was instead zeroing out its coffers in the largest payout ever. It is unsurprising to find out that the report goes on to say, “income tax revenue (fell) well short of the 2% kicker“ for “2007-09, 2009-11 and 2011-13.” Putting government services like Unemployment Insurance, Food Stamps, and Child Care for Needy Families at risk… right when we need them most.

Now it’s 2020 and we’re in a new financial crisis. Would it surprise you if I told you that this is also a year when the rebate policy “kicked” in? Last year, the state had near record overage in unexpected income, so Oregonians are getting their Kicker Rebate in this year’s returns. Did you get one? If not, you’re with the 25% of Oregonians that didn’t get a credit. That’s because low income people pay less taxes, so they don’t get any back. In fact, the average Kicker is only $800, yet the richest residents got back over $8,000!

So, if The Kicker looks like another financial stimulus, it’s not. Effective stimuli, like the one Nancy Pelosi just championed, are targeted towards lower wage earners as they are the ones most likely to spend it. Giving money to higher wage earners, is more likely to result in higher savings…. But that’s another story.

Going into a year, potentially even worse than The Great Recession, we can expect that – once again – state funding is going to be drastically decreased (as businesses are losing money, workers are being laid off).

Here’s the thing, projected income is going to have ups and downs. There’s very little that we can do to raise more money in a downturned economy. However, in an upturned economy, we can save the excess.

I get it, “rainy day funds” aren’t exciting. Cash money in your mailbox is exciting. But Oregon actually already has a Rainy Day Fund and it saved things from being even worse during The Great Recession (and although diminutive, it’s cued up to provide some assistance now). Let me tell you about it…

In 2007, the legislature suspended the Corporate Kicker (that’s a thing too – today most of it goes to fund Schools), and used that money to create a Rainy Day Fund. It turned out to be just in time, because that fund was wiped out almost as soon as it was created, which proves that putting excess money into such a fund is a good idea. In 2009, voters added a continuing source of deposits into the fund as part of the corporation income tax increase. Speaking of schools, Oregon also has a Education Stability Fund which can be dipped into during a crisis, but that requires a supermajority, and we can’t even get a quorum, so it is beyond the scope of this article.

The Rainy Day Fund is currently at $667 million, but it’s about to get rapidly consumed by efforts to quell the C0VID-19 crisis. To address future issues, the fund should probably be larger and be able to grow faster. I propose that we start an amendment to divert the Personal Income Tax rebates for the richest Oregonians into the Rainy Day Fund, and/or a Special Projects Fund.

States can’t print money, and that’s why it’s so important that they save it when there is an overage.

We have upcoming earthquakes to retrofit for, upcoming water shortages to prepare for, people experiencing homelessness and/or struggling to find shelter, but with all of that on the horizon, The Kicker tells the Oregon government that it can’t save any of the excess to work on these projects.

But hey, why worry about the fact that we might have some huge shock to our system, and be massively in debt due to something unexpected (like C0VID-19, or The Great Recession), there’s no need to plan for that, is there? Or… if you think that we should plan for it, why not join a local advocacy group like Tax Fairness Oregon (www.taxfairnessoregon.org).

I mentioned that the average Kicker was $300, and that’s because 25% of Oregonians didn’t even get a Kicker this year. The next 65% of Oregonians got less than $700. For each and every one of them, that is less than one paycheck, by definition. Because if they were making more money they would have been getting more money back.

For my last words, I just want to say that I think The Kicker is appropriately named, because that’s what it does to Oregon when we’re down. It kicks us.

For those of you that are interested in working on Kicker reform, please feel free to reach out to me, Brian Gardner, at communication_chair@washcodems.org.

I hope that we can follow California’s lead and start preparing for the next crisis while we face this one. For the sake of our future selves, let’s finally kick our Kicker habit.

Impact of the Kicker 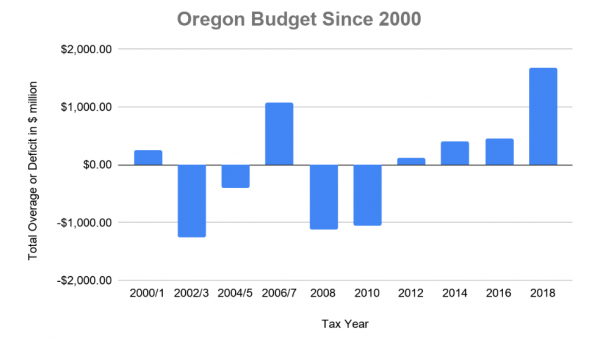 Oregon’s Budget Overages and Shortfalls add up to $120 million net surplus, but… 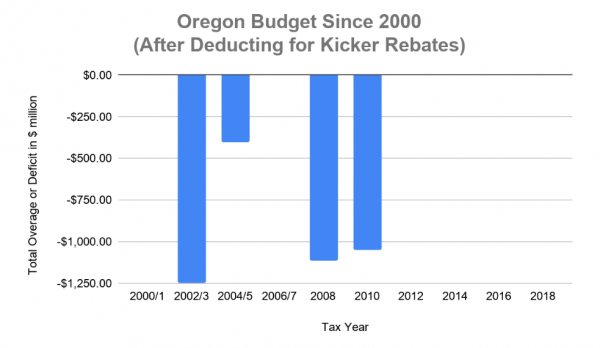 …since The Kicker returns the surpluses, the state actually has a $3,888 million net deficit.

Some data in this article comes from:  https://www.oregonlegislature.gov/lro/Documents/Basic%20Facts%202020b.pdf

Disclaimer:  Op-eds are the personal views of the author only, not necessarily the Washington County Democrats.  Please review our Terms of Service page, User-generated content, to fully understand our publication process.  Authors may submit their op-eds here.