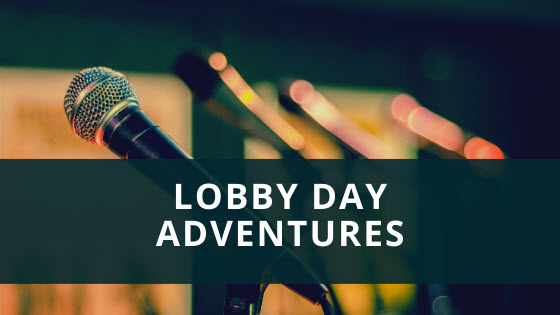 Do you feel like your voice isn’t getting heard by your government? Are you feeling frustrated and helpless about all the problems we’re facing? Good news–you can do more than just vent on social media.

Becoming a government lobbyist is easier than you think!

Okay, that might be an exaggeration. But while we might not all be high-powered lobbyists, we can all lobby our legislators.

I’ve had a few lobby day adventures of my own down in Salem, and would highly recommend the experience. The lobbying I’ve done was for the Clean Energy Jobs Act. Yeah…remember when the Republicans in the Oregon Senate ran away because they refused to vote on a carbon price? The Clean Energy Jobs Act is a great example of why showing up in Salem in person matters. The truckers and loggers who were manipulated into opposing Clean Energy Jobs came out in force to protest against it. It was crucial for the supporters of the bill to rally in large numbers as well.

Legislators notice when their constituents show up.

Here are a few more reflections/tips I’ve gathered from my lobby days:

*You don’t have to go alone. Yes, you can call the Capitol and make an individual appointment to meet with your legislator (most appointments are 15 minutes long). Believe it or not, the people in Salem work for YOU! It is their job to listen to you. But it can be difficult to make it down to Salem by yourself, and transportation can be an issue. If there is a bill or an urgent issue a lot of Oregonians are excited about, you can likely hook up with an organization working for the same cause which can organize a group lobby day. This can make things a lot more convenient–someone else will plan the day and set up the appointments with your legislators for you. Group lobby days can also provide transportation options like carpools and, sometimes, buses. Another option if you don’t want to go solo is to gather a group of friends who share the same political interests and put together a lobbying trip, complete with carpool.

*Be on time for your appointment. And not just because being punctual makes a good impression. When you’re dealing with fifteen-minute appointments crammed into a lawmaker’s tight schedule, being on time matters.

*Lobbying is most effective when you’re a constituent. This one is pretty straightforward–it’s best to talk to the legislators whose district you live in. This can be a little unsatisfying when you live in the Portland area, since our districts are so often solidly blue and our legislators so often already on our side. Wouldn’t it be more useful to talk to the people representing swing and red districts, and try to persuade them? But the simple truth is that the legislator you’re talking to will care a lot more if there’s a possibility you might be voting for and against them. And it’s not only that–it’s the legislator’s very job definition to serve the community of their district. Also, no matter how blue your district is, it never hurts to prod your representative to be more proactive about promoting the causes we care about.

*You don’t have to know everything about an issue to lobby. It’s easy to feel intimidated…what if your legislator asks you a question you do not know the answer to? You’d be surprised at how rarely this actually happens. The legislators are not there to quiz you. Also, it’s perfectly acceptable to say “I don’t know the answer to that–let me research further and follow up with an e-mail!”

*Have a personal story. Humans think in terms of stories and your legislator is much more likely to care about what you have to say if you make it personal. Rather than just listing dry facts and figures, or reciting slogans…how is climate change affecting you? How will an education bill directly affect you and your kids?

*Don’t be offended if you talk to staff. Your legislator may be in committee, or voting on a bill, or otherwise engaged…and thus will not always be able to make the appointment. You will frequently end up talking to your congressperson’s staff instead. Do not think of this as a slight, and take the conversation just as seriously. Legislative staff are hard-working people who spend a lot of their time responding to constituents, and they will pass on the information about the meeting to their boss.

*Don’t worry if you get lost in the Capitol. I get lost in the Capitol every time I go to Salem. It’s a complicated building. This may just be my lack of orientation skills, but I always have difficulty finding the passage from the House side to the Senate side (and a lobby day requires going back and forth between the House and the Senate!) In the end, I get rescued by some kind-hearted Capitol employee who finds me wandering the hallways and takes pity on me. In short, don’t be hard on yourself if this happens to you–it’s normal.

*Send a follow-up e-mail. Regardless of what the outcome of your conversation was, it’s a good idea to follow up with an e-mail to your legislators. Thank them for their time, remind them of what you talked about, and send additional information about the bill/issue in question.

And as an Oregon resident, your legislature is open and available to you. Take advantage of this opportunity and visit.