Notes From The Platform Convention 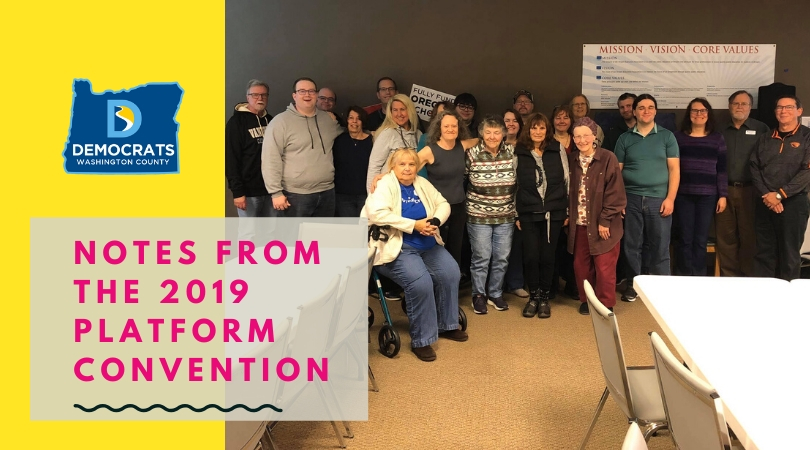 This is a complaint commonly heard from Democrats. Whether they are progressives who think the party is too centrist, or moderates who worry that it is moving too far to the left, the variety of people who make up the Democratic party are not too shy to express their opinion about where they think the party stands on the issues, and where they think it *should* stand on the issues.

So, are you feeling some of that “my party is out of touch with me” malaise? May I suggest that you…attend the next platform convention?

I spent my past two Sundays–Oct 6th and Oct 13th–at the biennial Washington County Platform Convention, and it was an enlightening experience. This was where the very heart and soul of our party were getting hashed out–in great detail, I might add. We spent two days deciding which values and principles would be included in our platform, and how they would be prioritized on our list of legislative items.

There were about twenty-five of us at each session. The people present were passionate and committed, and there was a lively debate over many of the points on the agenda. Still, I would like to point out that twenty-odd people were deciding the fate of which ideas will form the foundation of our county party. It would be wonderful if attendance could grow in future years.

Granted, the experience involves a grueling schedule. Each day is an honest-to-goodness full day–from about 9 am to about 5 pm–and later, if debate runs over. And we are talking about the WashCo Dems here, so debate WILL run over. Still, it could have been a lot worse. The platform committee wisely put time restraints on debate this year, so that the entire event wouldn’t turn into a three or four day shindig–which, if we’re trying to encourage busy working people to attend it, it really shouldn’t.

The first Sunday was spent deciding which planks (or statements of value) would be part of our platform. Which issues were important to us? Each person present could make a motion to add, alter or strike a plank from the platform, as long as they could find a second. The motion would then be debated, with those supporting and opposing the motion taking turns, and then all present would vote on it. The platform was divided into general topics, such as economic justice, health care and climate change.

Here are only a few of the subjects we ended up discussing: What is healthy food, and do we even have the right to define what it is? Which services should be available to students at all schools, including charter schools? What should the sustainability requirements for new construction in Oregon be?

The second Sunday was devoted to LAIs–or Legislative Action Items. These were items which we would be presenting to our local and Federal legislators, ones which were related to a specific action or bill which could be proposed (such as banning assault weapons, for example). Once again, the participants were able to either submit items for a vote, change them or scrap them altogether. The list of all accepted LAIs will go to Washington County PCPs, and we will be able to vote on which items should be our highest priority and be given to our legislators for review.

All in all, this was a great chance to spend time with my fellow Dems in genuine conversation about issues which matter to us. If that doesn’t pique your interest, consider this: The finalized platform of the Washington County party will influence which planks of the platform are selected by the Oregon Democratic Party at the state convention. And in turn, the state platform will influence what is included in the national Democratic Party platform in July in Milwaukee.

The decisions we made here in Washington County will have an effect on the decisions the national party makes! If you’ve ever wanted a way to help your Democratic party to represent you better, here it is.

See you in two years!

Participants were strongly encouraged to review the following materials prior to the Convention:

The Work of the Convention