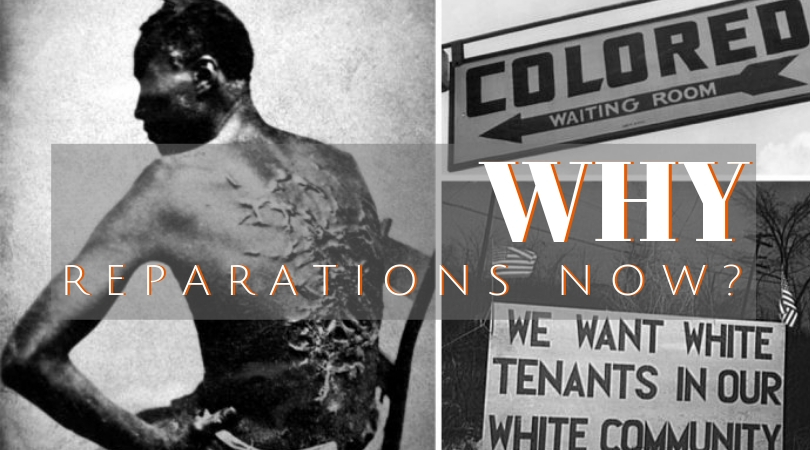 What are reparations and why now, you may ask.

Life has a beginning, a middle, and an ending as with all societal developmental stages. Merriam-Webster defines reparations as “the act of making amends, offering expiation, or giving satisfaction for a wrong or injury.” Reparations would help repair and restore social, economic, political, and environmental injustices to wounded war victims of the Atlantic slave trade that still impacts Black African American descendants of slaves.

Everybody should know that Black Africans are the only nation of people who were not willing immigrants fleeing to America but were kidnapped or stolen, sold, separated, killed, and maimed for economic gain.

These egregious and inhumane behaviors subjected Black African Americans to unequally, unfairly, and unjustly misused and abused conditions resulting from racial, social, psychological, emotional, economic, and environmental discrimination and practices lasting over four generations. Black African Americans were forced to lose their culture, language, pride, dignity or self-worth, and community and family connections with their native African roots. The consequences of this behavior led to an unequally yoked and racially divided society embracing low waged work and prize economic tokens for the sole benefit, greed, and gratification of White Anglo-Saxon Americans. The justification for these conditions reflected as a primary source of investment toward sustaining America’s economy.

The outcome of these egregious actions manifested themselves in acts of war without subsequent compensation for the work performed by the unlawful cargo of Black African hostages transported to America over 400 years ago. Whereby, Blacks were brutally coerced by their White captors and used as subhuman workhorses as sources of free labor. And because of these willful manufactured horrendous conditions, the descendants of Black African American diaspora became victims of war, from which Black Americans have never recovered. Unapologetically speaking, Blacks deserve to be reimbursed for their long-term generational oppression, suppression, struggles, and strife. It is just the right thing to do given the ongoing socioeconomic barriers, institutionalized racism, implicit racial bias, and other discrimination and practices endured by Blacks daily in the 21st century.

Therefore, it is this thinking that sets the premise and purpose for why reparations for Black African Americans are critical to achieving socioeconomic equity and equality toward eliminating social, political, and economic racial injustices.

Black African Americans have been and still are victims of long-term war damage originating from the Atlantic slave trade. The slave trade resulted in premature deaths, Jim Crow laws, family auctions, and separations, social, civil, and human rights abuses lasting 400 years or more. The recent acknowledgment of 400 years of Virginia’s August 1619 first Black African slave trade is both reflectable and remarkable moments in Black and White American history. This topic, although controversial, is worthy of meaningful discussion and understanding of the benefits, importance, and need for victims of war reparations. History reflects compensation for war damages to countries impacting Jewish descendants. For example, in 1919 the United States helped Germany pay 33 billion in reparations to reimburse its citizens for war damages. As a result, Germany restored its independence and power in establishing a Jewish monument of self-reliance among its country and throughout the world.

However, United States reparations for Black African Americans, and what this might accomplish, is financial freedom which would lead to generational economic independence. Since America’s primary economy is based on monetary value, this compensation will yield economic independence, individual empowerment, community social power, political status, and position. And thus, it will provide a means for which Blacks will become equally an equitably financially yoked with jobs, entrepreneurship, and opportunities. Achieving such financial freedom via reparations would help create an equal and equitable socioeconomic wealth for not only the Black population but also the poor White society and our country. A society whereby, Black African slave descendants will have an equal opportunity to rise above generational economic inequality for which they are still enduring. Reparations will and should not be viewed as a hand-out by anyone, rather a token of good faith effort by the country to satisfy an unpaid debt to the descendants of slaves.

Reparations will help to correct the wrong done by White Anglo-Saxon Americans who unjustly, emotionally, psychologically, and economically enslaved Black Africans. Reparations will establish monumental pride and monetary worth reflecting financial independence and self-sustainability to restore dignity, self-respect, self-worth, and empowerment to the Black African diaspora population for current and future generations. Why reparations now, you may ask, because Blacks are still suffering as war victims from the infliction of residual social, racial, legal, cultural, economic, political, and discriminatory practices. And as such, Blacks deserve the same equality, equity, opportunity, and justice to achieve the American dream that Black slaves made possible for White America, and their future generations, from which they prospered. “A fair shot” to health and wealth is never too late to achieve!