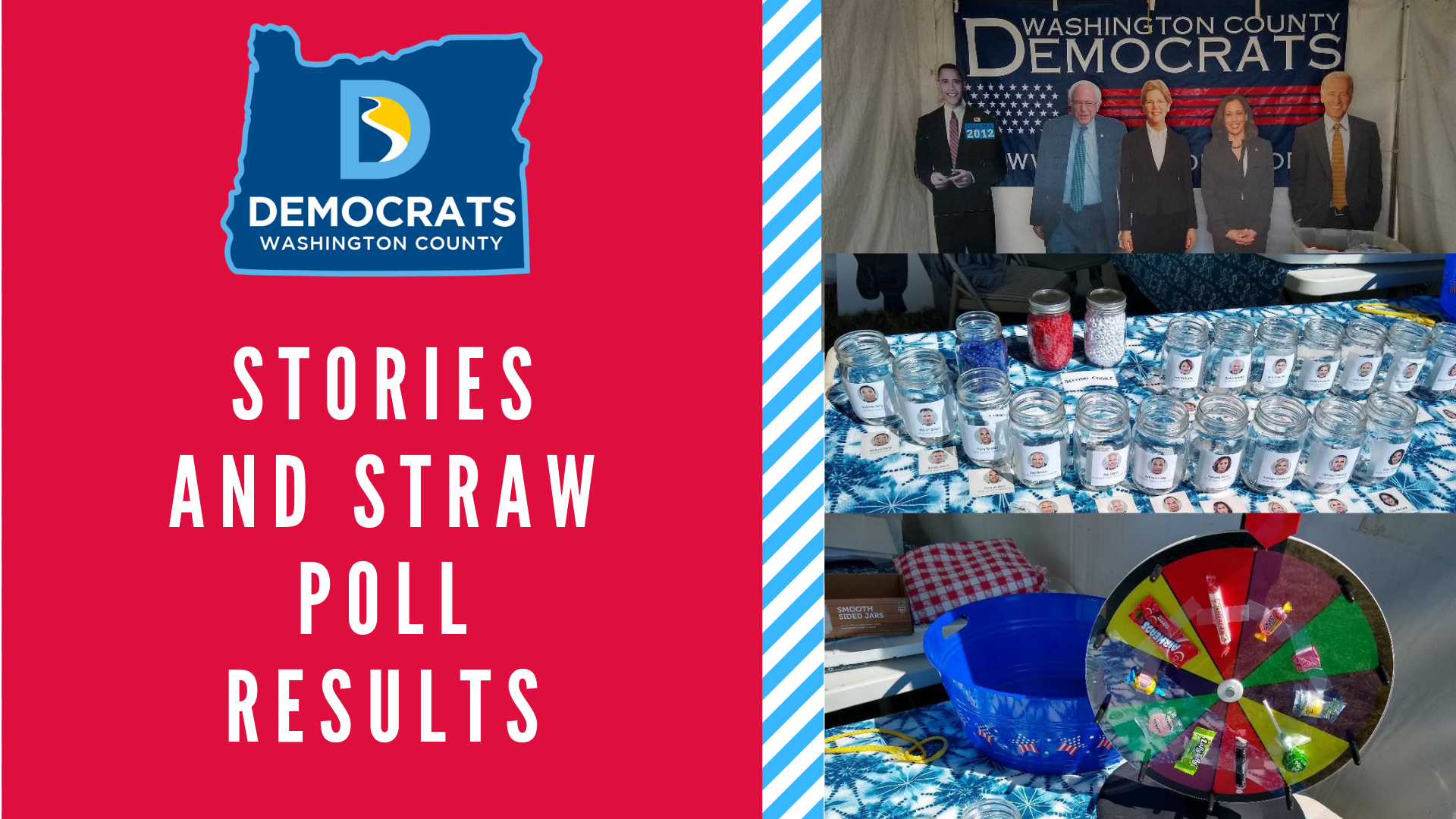 The WashCo Dems recently hosted a booth at the Washington County Fair. Over the course of four days, our volunteers met thousands of people and many of them participated in our straw poll by selecting their favorite and second favorite Democratic Presidential candidate. Kids spun the candy wheel to get their favorite treat and pounds of candy were also handed out to children (and parents). Others still stopped to take photos with cardboard cutouts of political figures. Below are the results of our straw poll and several stories from volunteers who attended the booth.

One of the most popular attractions of our booth was the straw poll for Democratic candidates. Potential voters used beads to select their favorite and second favorite contender and with 195 of the 900 first choice votes, Senator Bernie Sanders was the clear first choice winner. Interestingly, when first and second choice votes are combined, Senator Kamala Harris narrow edges out Bernie with 321 votes compared to 318. Other candidates with over 100 totals were Vice President Joe Biden, Senator Elizabeth Warren, and Mayor Pete Buttigieg. 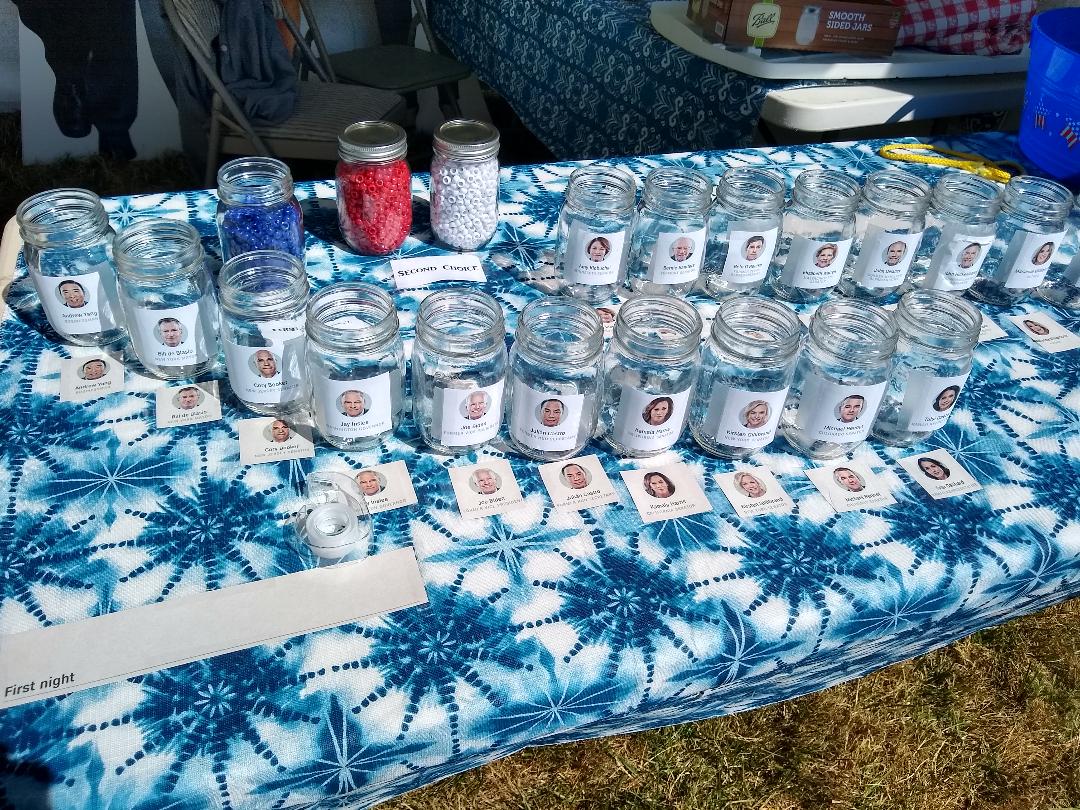 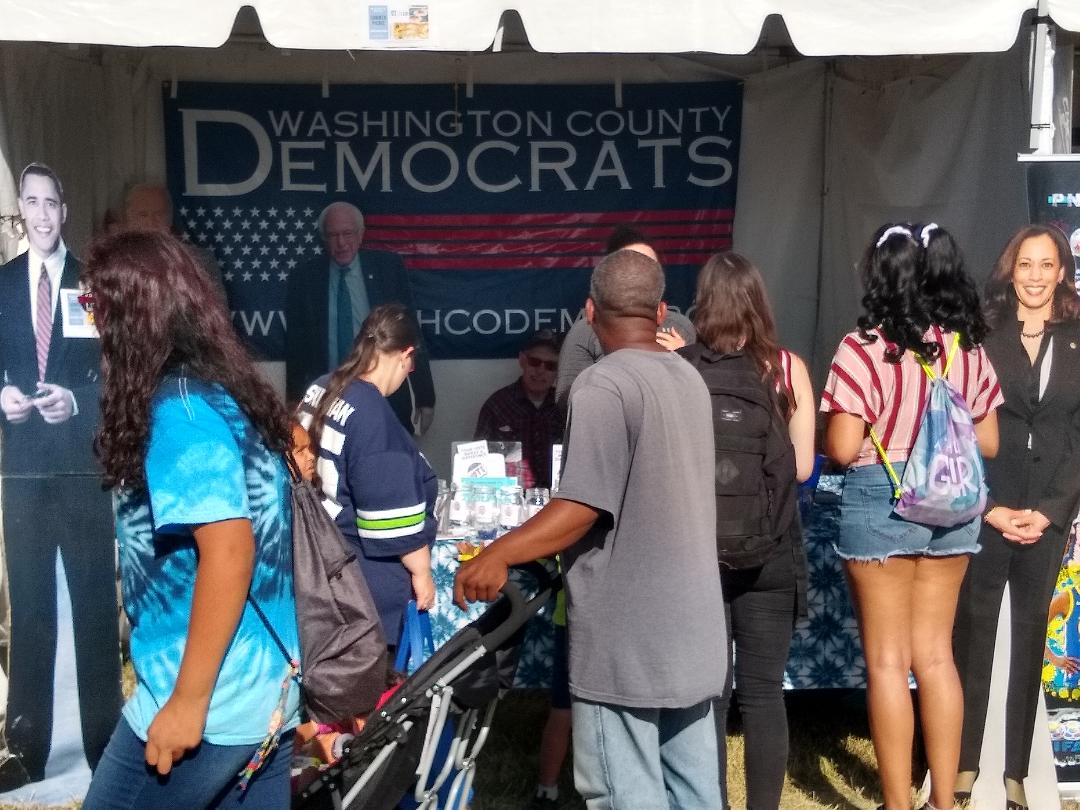 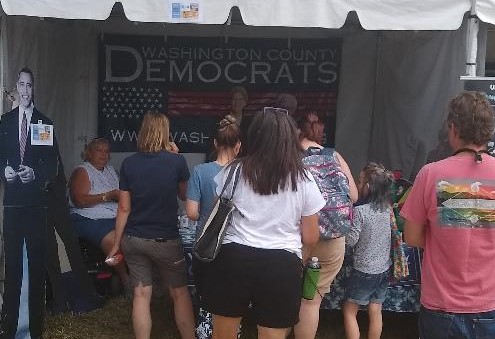 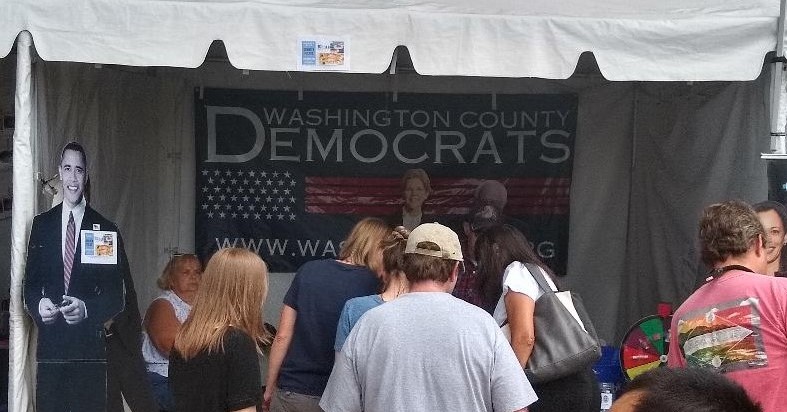 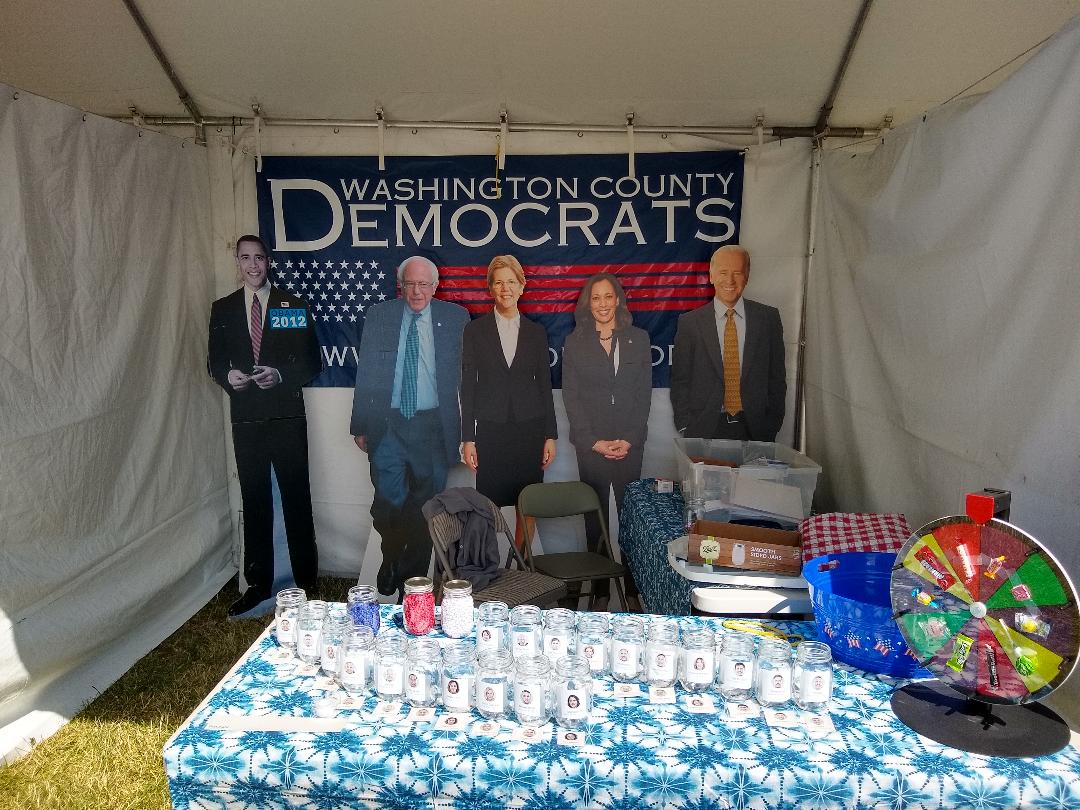 If your favorite wasn’t listed above, don’t be discouraged! That just means they need your support even more.

Full results for the poll are below.

It’s important to note that this poll is meant to be more fun than scientific. Volunteers did their best to keep the results secure and rules consistent throughout the Fair, but it’s possible that some votes were miscast. 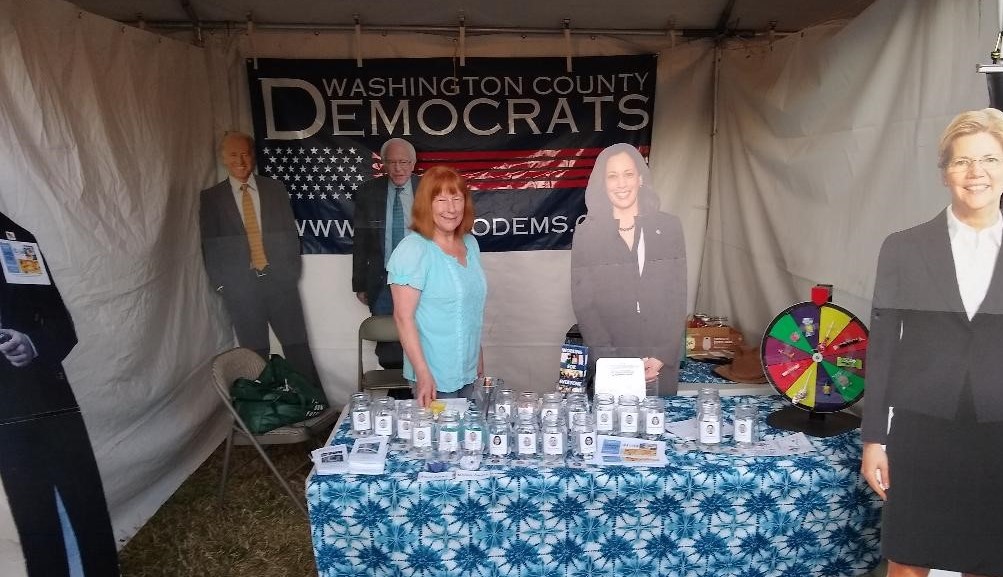 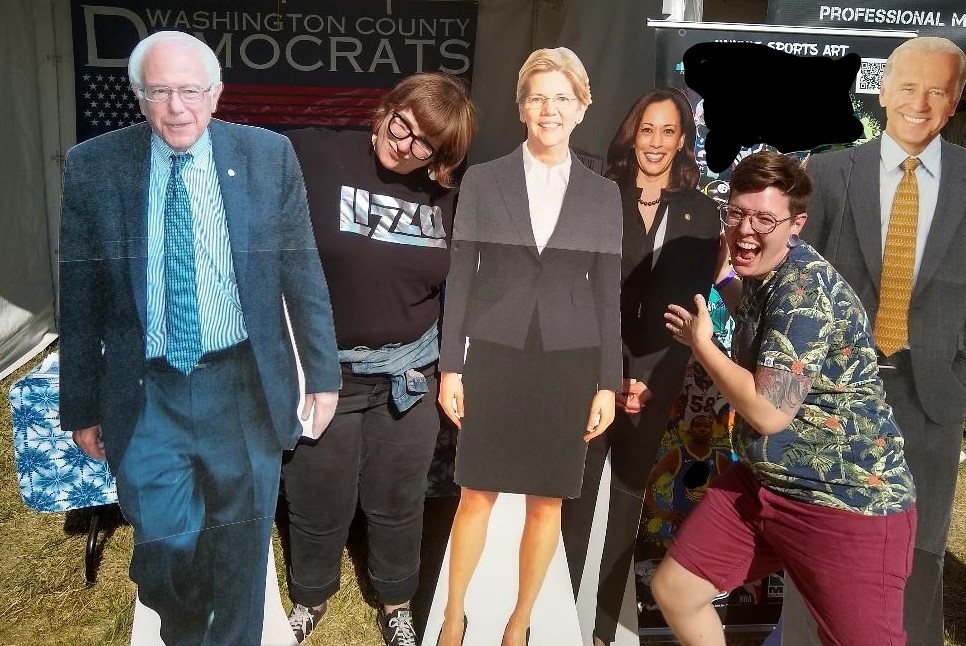 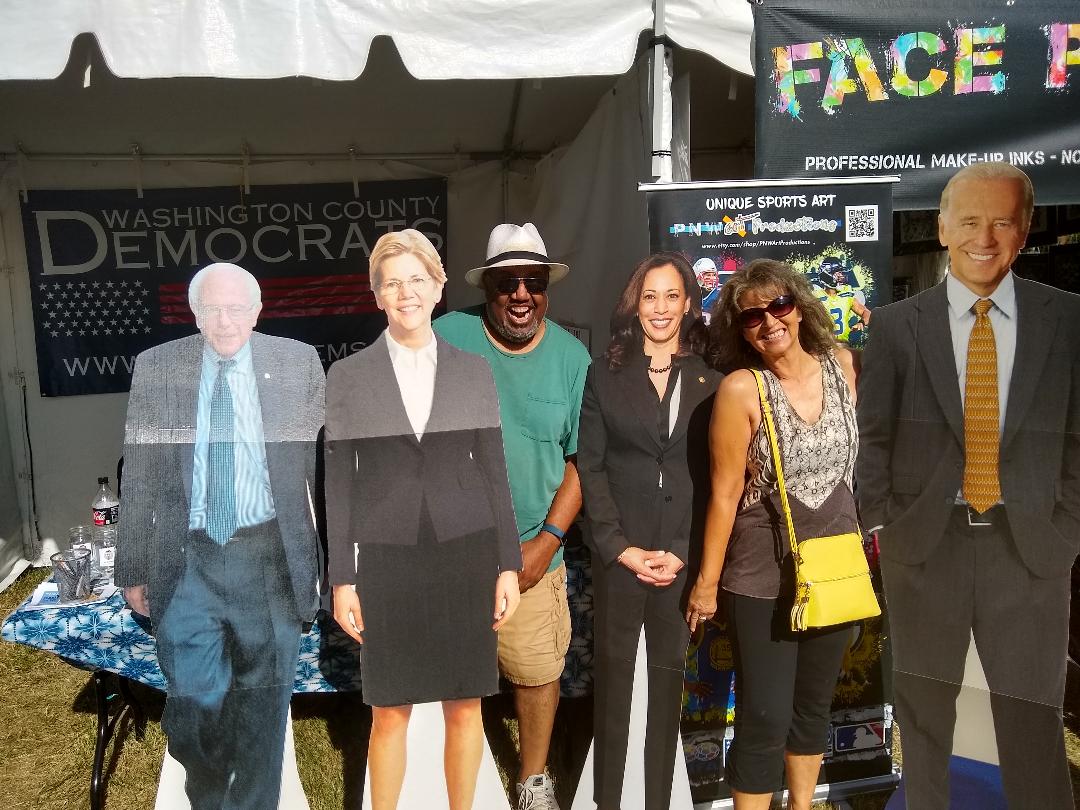 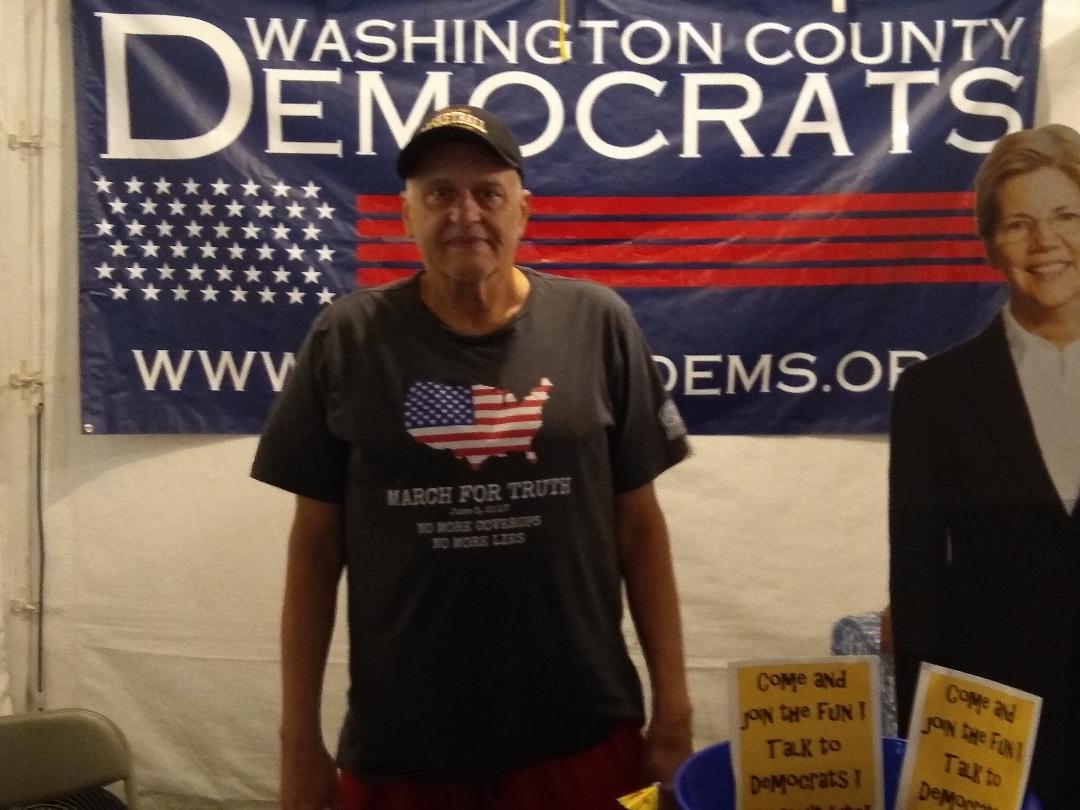 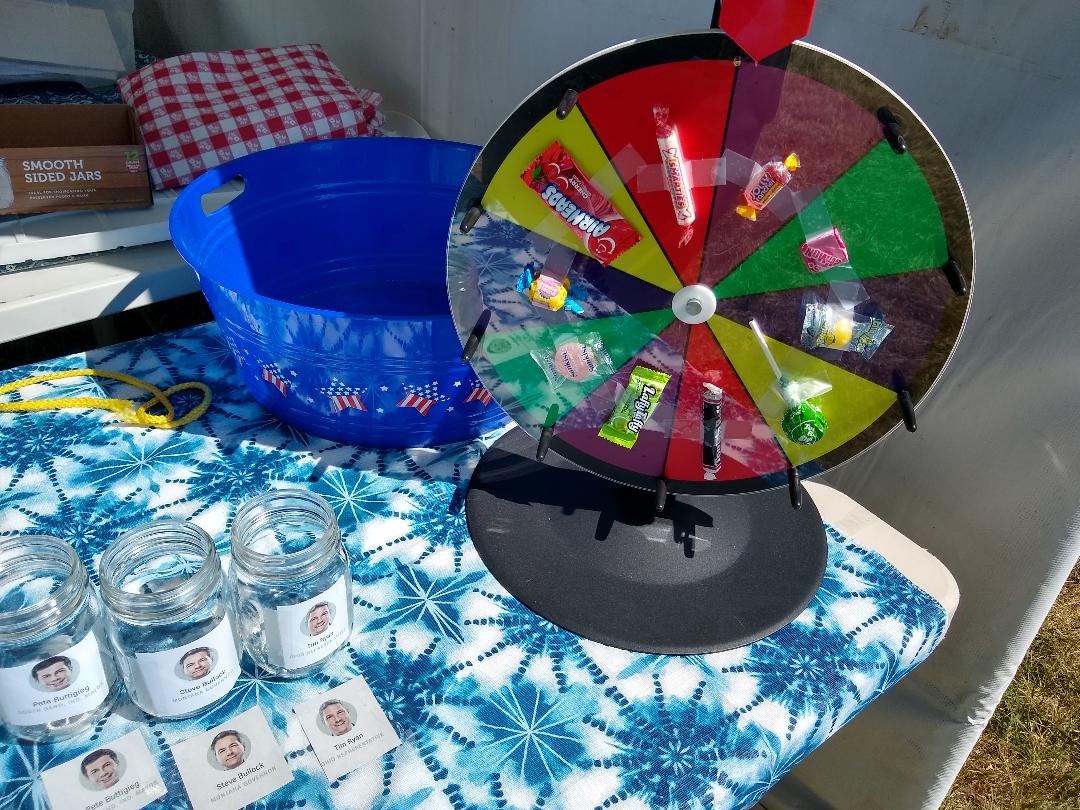 From first time volunteers to a State Representative, nearly two dozen people volunteered to table the WashCo Dems Fair booth. Below are their stories.

This year at the Washington County Fair, I had the pleasure of volunteering at the Washington County Democrats booth for an evening. It was a great experience, bringing back memories from my time as a 4-H student and a 4-H mom, and giving me the opportunity to connect with folks from around the County. I had great conversations about politics and policy with people from all political persuasions. To me, this is a representation of everything the Washington County Fair has to offer. The Fair is an event where urban and rural folks can connect, show their pride in Washington County’s vibrant agricultural sector, and just have a great family-friendly time together! I am looking forward to next year’s fair already!

I thoroughly enjoyed my first time in the WashCo Dems booth at the Washington County Fair.  The experience was fun, chatting with like-minded passersby. There was a Republican from the GOP booth, who stopped by; and we had an amiable conversation about the political divide in America.  I will definitely do this again at next year’s County Fair!

The straw poll jars and candy were a good mix – kids wanted the candy and parents either were interested in the straw poll or wanted their kids to have candy. The next-door face-painting booth guy helped us tie up our Warren cutout to prevent wind from knocking her over and we got a volunteer to sign up within a couple hours of opening the booth.

Someone in a Trump hat came along and Sue complimented him on his shirt (it was a nice shirt) – and the Trump supporter said “thank you”. It was a nice moment.

I very much enjoyed joking with people about the numerous nominees for the Democratic Nomination. People seemed to be hungry for information from the Democratic Party and were interested in our local activities. The candy wheel was a great hit and gave people an excuse to step up and talk with us.

We had a visit from a middle school student who wanted to vote in the bead poll.  She had been involved in studying and discussing the candidates in her social studies class and is very engaged in the process.
Most folks are still considering the options.  Even if they have dismissed some of the candidates they could appreciate parts of the various proposals–especially those of Andrew Wang.
And four people during my shift stated emphatically that they would be voting for the Democratic nominee no matter who it will be.

Such an electrifying and exciting time at the Washington County Fair this year, as I helped staff the booth for the Washington County Democrats.  Fair-goers grinned when they saw the familiar faces of our cardboard cut-outs of various candidates and Obama – it seemed everyone wanted their picture taken with the former president.

Little children smiled, too, thanks to all the candy and bubble gum we were giving away.  The older ones even wanted to participate in our straw poll, so we said, “Sure!  Whoever wins in 2020 is gonna be your president, too!  And I want you all to remember this moment – it may not be as official as when your folks go vote, but I think it still counts.  This is your first vote!  Isn’t that exciting?  Now promise me:  When you turn 18, you’ll be just as excited to cast your first REAL vote!  And I don’t care who you vote for.  You can vote for ‘the other guys’ if that’s what you want.  Because voting is vital to a democracy.  It’s the most important thing an American can do.”

Speaking of this vital privilege of American citizenship, we helped several folks who needed voter registration packs.  Some had just moved here from other states, but the person that stuck out the most was the man who told me he’d only been a citizen for a week.  With a mixture of happy tears and grins, we talked about how exciting it would be for HIS first official vote.  God bless America – THIS is what makes America great.

We had a lot of folks who wanted to get involved in the Washington County Democrats, filling our sign-up sheets with name after name.  But hey, YOU can still join us even though the fair is over.  Click the “Volunteer” link above for more information.  After all, look at how much fun I had at my first volunteer event!

From the Outreach Committee

Thank you to everyone that volunteered at the booth, the Fair staff that guided us and provided a wealth of information, and all of the visitors that spoke to us and participated in our activities. We’ll see you all again next year!