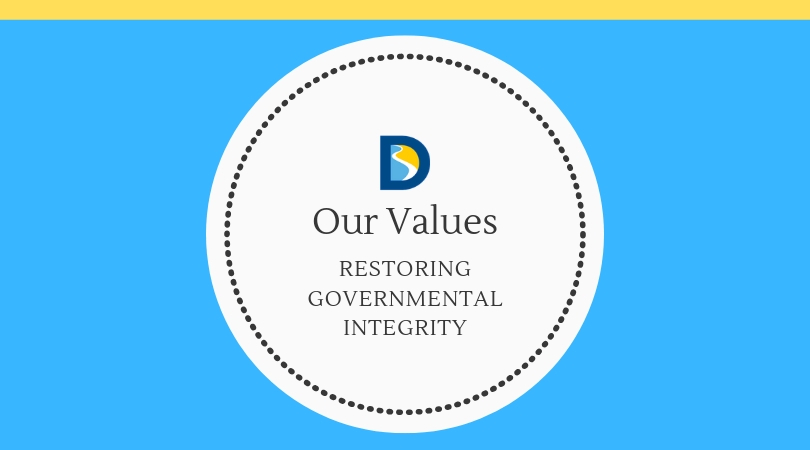 When it comes to voting and election law, Democrats and Republicans don’t just have a different approach–they are polar opposites. Democrats want as many Americans as possible to vote. Republicans prefer it when fewer people vote, and have publicly admitted to this. And our Washington County Democratic party platform reflects this contrast.

Article VI (Restoring Governmental Integrity) of the party platform lays out the party’s fundamental philosophy when it comes to voting: “Every citizen deserves full, meaningful and accountable representation at every level of government. We hold the right and responsibility of all eligible persons to vote as an essential foundation of our democracy.”

We will not be able to truly make headway on this until and unless we address the underlying problem our country is grappling with–the big money involved in our elections.

Our party platform states it clearly: “We believe that corporations are not people and money is not speech.”

We do not agree with the Supreme Court’s Citizens United ruling. The Washington County Democrats support campaign finance reform, hopefully going as far as a future Constitutional amendment reducing the influence of corporate money in our election system. We would like to see publicly funded election campaigns. Until that is the case, our party wants campaign contributions to be completely transparent. Americans should be able to easily find information about who donated to a campaign, or who is running a political action committee.

And do we really want to find ourselves in another situation like the elections of 2000 and 2016, in which the Democratic candidate received the popular vote, but the Republican won due to the antiquated rules of the Electoral College system? One person should mean one vote. Weighing the importance of a voter differently because they live in a specific state is unfair. Thus, our party absolutely supports the concept of a direct popular vote in all elections, including the national election for President.

Many potential voters don’t participate in elections because they feel disillusioned about the choices available to them. New ideas can help here, too.

The Washington County Democratic platform supports preferential voting (such as instant runoff and ranked choice) in single seat elections. Preferential voting allows people the opportunity to choose from a wider variety of candidates, rather than feeling pressured to vote for the one “most electable” option. We also support open primaries, which would encourage independent and nonaffiliated voters to become involved with and energized about the Democratic Party.

The Democratic party vehemently opposes any kind of voter suppression or disenfranchisement tactic. In recent years, the Republicans have shown themselves to be very willing to come up with various ways to suppress the vote, especially the vote of people of color, low-income voters, immigrants, students, or any other group of people the GOP suspects might be unlikely to vote for them. Everything from demanding an ID at the polling place to reducing the number of polling stations in traditionally African-American neighborhoods–the Republican party will try any method to reduce voter access.

Look no further for proof than Mitch McConnell and the Republican Senate blocking election security bills.

Even as we see mounting evidence that foreign powers are still interested in meddling with American election results, McConnell and the GOP are apparently not concerned about this threat to our national security.

To sum up, it is our basic goal as Democrats that voting should be easy, for every American citizen. We believe in an open and transparent system. We believe in transparency when it comes to counting and recording votes. We are opposed to gerrymandering and believe that voting districts should be shaped by a fair and unbiased process, rather than turning redistricting into a partisan political game after each census.

An open and unbiased media is necessary to our efforts. The return of the Fairness Doctrine would reduce partisan noise and fake news, and ensure multiple points of view are represented in news reporting. Our party supports reinstating the Fairness Doctrine. The policy was struck down in 1987 during the Reagan administration, leading to the rise of right-wing radio talkers such as Rush Limbaugh.

Voting rights are crucial. It doesn’t matter how great and wonderful our nominee going up against Trump in 2020 will be–if our election system is corrupted, he or she may not be able to win. For more information about the Washington County Democratic Party platform, go here.

This is the sixth of ten articles the Comms team is writing on our 2018 What we Stand For (which maps 1-to-1 with the Articles of our 2018 Platform).  Facts and policies exist within the frame of morality, which is how the brain works.  Our challenge as Democrats is to state our progressive values better to our coworkers, neighbors, and family.  Our values are as American as apple pie, and the American flag means more than just supporting the troops or the status quo.  Our policies must be grounded in values and feeling and not just theory in order to connect to voters that may not yet be swayed to vote Democrat.  We must also understand the traditional conservative values of non-Dems (and Dems) better in order to improve our empathy and ability to connect (which is core to progressiveness).  This series of articles by our writers explores our values by offering some depth and context.