Our Values: A Just System 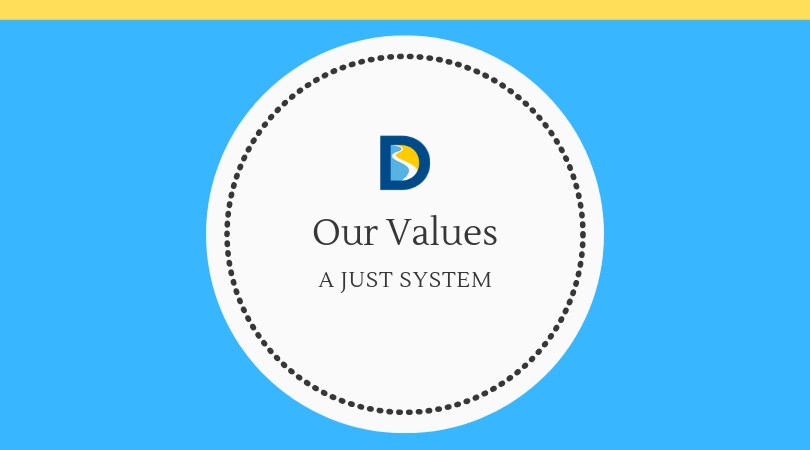 The United States leads the world in mass incarceration. From the 1980s to 2013, state and local expenditures on education increased 107%, while total state and local corrections expenditures rose by 324%. The War on Drugs, first started by Nixon, then enhanced and made more brutal under Reagan, set the tone of a generation – no tolerance for those who commit crimes, especially for the communities ravaged by drugs and violence. This led to a modern day othering of communities of color – folks were judged to be criminals, users, deviants, super predators, simply because of the color of their skin and the economic conditions of their neighbors. Side by side the ruthless nature of Reagan economics that stripped welfare from the poor, and butchered public assets like schools and affordable housing, black and brown communities found themselves trapped in a cycle of poverty and mass incarceration – “The New Jim Crow”.

The New Jim Crow has many similarities to our not so distant past.

While overt racism has been pushed out of societal norms – internalized bias still seeps into every aspect of society, from healthcare, education, and especially policing. Black and brown people are locked up at a much higher rate than white people for crimes committed at relatively the same rate, and the kind of interactions they have with police are not positive, they’re punitive – it’s harassment over policing, and there’s plenty of money to be made. Our society has conditioned marginalized communities to fear police interactions and to stay clear of them at all costs to avoid ending up another victim of state violence such as Michael Brown, Philando Castile, or Mike Garner .

In the words of Marc Lamont Hill, “They were killed because they belong to a disposable class for which one of the strongest correlates is being Black.”

To be black or brown in the United States of America is to live in constant fear that following the law won’t be enough to save yourself from being murdered. It is knowing that the inherent value of your life is not seen to carry the same weight as the value of a white person’s life. Police look at children from these communities and see them not as innocent, but as suspicious – their internal bias indicates that from the start they view them much older than they are. This leads to tragic stories like the shooting of Tamir Rice, a twelve year old child playing with a toy gun outside who was given only seconds to react to police commands before they shot and killed him, saying he appeared to be twenty.

The horror experienced by those marginalized by state sanctioned violence is nothing new – but the prevalence of video evidence is, not that even the most damning footage could be relied on to bring justice.

“If you have criminal profile, well they say he was a bad guy – if you’re a “good guy” it still doesn’t matter. If you stand still like Erik Garner you get killed if you run like Freddie Grey you get killed, if your pants are down like Trayvon [Martin] you die, if your pants are up like Walter Scott you die, it doesn’t matter. Ultimately the problem isn’t the people being killed it is the people who are rendered invisible at first and when they get seen and become legible they are still nobody.” – Marc Lamont Hill

It is impossible to separate a punitive justice system from the Washington Consensus defined concisely as an ideology driven by market liberalization and the privatization of state assets. In essence, roll back the egalitarianism of the New Deal and Great Society to bring about a hybrid project that enforces the brutality of Reaganism with the Technocratic cover of the of the Bill Clinton era. This would go a long way to normalize mass incarceration policies, and build support from both sides of the aisle.

The consequences of the America that was built in the vision of Reagan crime policy has brought irreversible damage to marginalized communities.

There has been no restorative justice, no reparations for past and continued state sanctioned crimes. There was no expectation that communities whose ancestors had their freedom, lands, and humanity stolen from them and whose descendants have been forced into economic subjugation could thrive under an economic system dictated by hereditary wealth. It is undeniable that the vast wealth and income inequality play a huge role in setting the stage for conflict. Without the conditions to thrive and build themselves up, it should not be a surprise that over policed, underfunded communities end up bearing the brunt of our criminal justice system.

Solutions to mass incarceration have appeared in other countries across the globe. In several European countries, prison sentences aren’t as long. In countries like Germany and Netherlands the rates of recidivism are lower in part because of a focus on resocialization and rehabilitation over isolation and punishment models of criminal justice. Our European allies also treat things like drug addiction as the health problems that they are, and not as something to be weaponized against defendants. Quite simply, other world leaders put away people for less time, and less often, with criminal justice systems focused on making sure they aren’t likely to commit crimes again.

Americans are locked up at more than five times the rate as people in the communist dictatorship of China, and just under six times the rate of our Canadian neighbors. The difference is that the United States has had a carceral state build up supported by tough-on-crime laws and born out of the War on Drugs. Mandatory minimums and 3 strike laws leave little discretion on how to avert putting away people for cruelly long sentences, and while states like New York and California have begun to revise their statutes, the damage is already done for marginalized communities who were affected by these policies the most.

Our platform calls to end some of the most abusive practices that get people locked up, especially black and brown communities.

Practices like prosecutorial overcharging and coercive plea bargains reflect some of the more heinous actions that get people to confess to things they did not do and hurt the relationship between members of the community and police officers. While private prisons make up a relatively small portion of total incarcerated people, the practice of making money off keeping people in cages is egregious, and we are proud to call for its abolishment. We support people being able to go about their days, unbothered by police harassment and intimidation – no one should be forced to carry legal papers; the practice of profiling should be retired to ensure the rights of our community members.

Mass incarceration has been constructed over decades through multiple avenues, and visions for an alternative future must grapple with the repercussions of what in so many ways is still Reagan’s criminal justice system. Our platform in its entirety would begin to move the needle significantly in the direction of restorative justice. While we move forward, the names of the victims of state violence and the people who languish in unjust incarceration should be at the forefront of our minds, never to be forgotten.

This is the fifth of ten articles the Comms team is writing on our 2018 What we Stand For (which maps 1-to-1 with the Articles of our 2018 Platform).  Facts and policies exist within the frame of morality, which is how the brain works.  Our challenge as Democrats is to state our progressive values better to our coworkers, neighbors, and family.  Our values are as American as apple pie, and the American flag means more than just supporting the troops or the status quo.  Our policies must be grounded in values and feeling and not just theory in order to connect to voters that may not yet be swayed to vote Democrat.  We must also understand the traditional conservative values of non-Dems (and Dems) better in order to improve our empathy and ability to connect (which is core to progressiveness).  This series of articles by our writers explores our values by offering some depth and context.