Skip to content
Down the Ballot: Casey Kulla Interview

Down the Ballot: Casey Kulla Interview 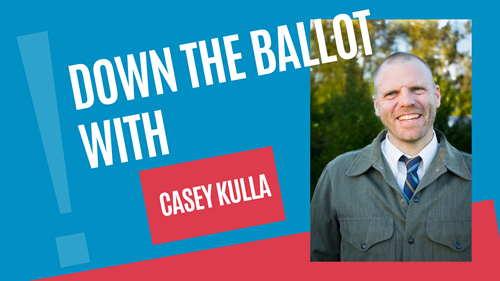 Over the next several months it is my intent to take you ‘Down the Ballot’ and introduce Washington County Democrats and our friends to each of the candidates seeking the Democratic nomination for governor. More candidates are sure to start announcing as we head towards Labor Day and the DPO Summit.

2022 will be the first open race for Governor since 2002 where no one is seeking the office that had previously held it. This is a rare thing for Democrats in our modern history of holding the governorship. In every matchup for the last 36 years, we have out campaigned and outpolled the Republican candidates for governor. It’s a good bet that the Democrat that prevails from this primary will be the favorite to win the general election, especially if Democrats knock on doors and get our neighbors to vote.

The first Democratic candidate to announce for 2022 is Yamhill County Commissioner Casey Kulla. Below is an introductory interview with Casey. Towards the end of the interview, we ran into some bandwidth issues that caused the video to lag just a little bit, but all the audio came through fine. Please forgive these minor technical difficulties. I hope you will enjoy it.

For those that are curious, the buttons and stickers used in the collage of this video frame are from my collection of mostly Democratic candidates for governor over the years. I say mostly because I can never resist putting in a Tom McCall item.

From Left to Right they are