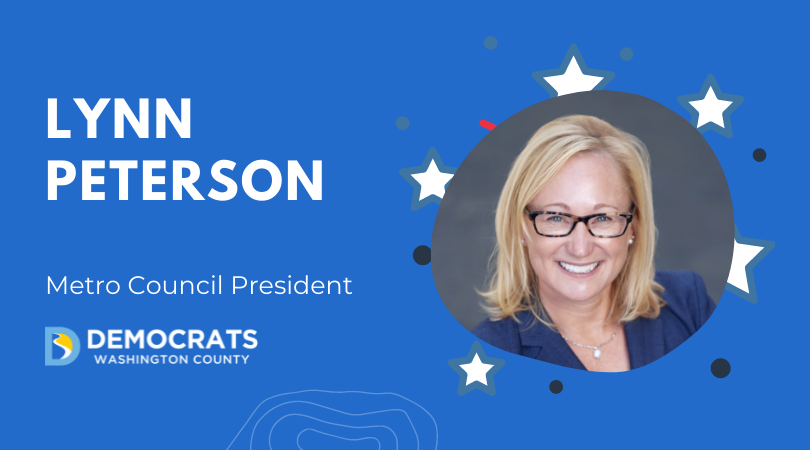 WCD: How do your values and those of the Democratic party align?

Oh my goodness…You know, the Metro Council has set itself up to reflect the values of the region and of the Democrats, by using two lenses to view everything: one is about climate change and the other is about racial equity.  So, when we have any decisions brought before us, whether it’s a community engagement discussion, who’s gonna be on a commission or committee, who’s at the table, where are the investments being made, it’s all towards the goal of increasing GHG emissions and the goal of increasing access to opportunity to everybody.

WCD: Which elected official do you most admire and why?

I’ve had a huge crush on President Lincoln for a very long time, but I would say President Obama, because he pushed hard, again, to fuel the very things that we’re talking about, of giving everybody opportunity, but he also recognized that change does not happen overnight.  And that striving for perfect and then ending up with nothing is not a good way to lead.  What do you need to end up 80% of the way there?  He asked us to get involved a thousand times, and I was always like, yes!

WCD: If you are elected, what is the one specific project or goal you most want to accomplish?

WCD: What is your strategy for working on the affordable housing issue?  How do you balance density with livability?

Many of the cities have a Vision Zero program in the region, and we have certainly taken that approach at Metro.  In terms of the regional transportation plan, there was a measure on the ballot in 2020, that was looking to solve congestion, and there was no congestion during the pandemic, so people didn’t feel they needed it.  At Metro, we looked at 13 corridors–TV Highway, even Highway 26.  It was all about making it more multimodal, TV Highway being a good example. The whole point was to make sure that there were safe crossings, bike lanes, that the signalized intersections were smoothly moving traffic, and were safe for all modes.  And one of the things we learned during that conversation, is we went deep into what communities of color need, and found out that the color of the streetlights was not illuminating darker skin.  That is a conversation that we’re going to have to have, about moving the street lights to a different part of the light spectrum, to make sure everybody is going to be seen.

WCD: I love and use public transit, but the pandemic has caused a societal shift with more people working from home full time, some permanently.  Taking that into account, what is your vision for public transit development in the region?

We know that 30% of the population is transit-dependent.  Tri-Met’s original slogan was “How We Get There Matters,” and I think that’s still true today.  We need clean air and water.  But we’re in an interesting time.  I think people will still want to take transit when they feel it’s safe after the pandemic.  But we have a lot of capacity in the road and transit system, that is ready to go as we grow.  None of the public transit should go away, but we’re also going to have a lot more room on our roadways.  If 50% of our population is able to work from home 2-3 days a week, that makes a difference.  It means congestion is slightly less coming out of the pandemic.  But I think as things get back to normal and the congestion gets worse, people will come back to public transit, they will want to be back on the bus and the light rail.

WCD: Anything I have left out that you would like to talk about?  What would you like the Washington County Democrats to know about you?

It would be nice for them to know that 20 mayors of 24 in the region have endorsed me.  That a wide range of diverse interest groups had endorsed me, from the League of Conservation Voters, to Building Power For Communities Of Color, to labor unions, firefighters, teachers, the list goes on.

I appreciate the Washington County Dems so much and all the things that you do, and I look forward to working with you all.