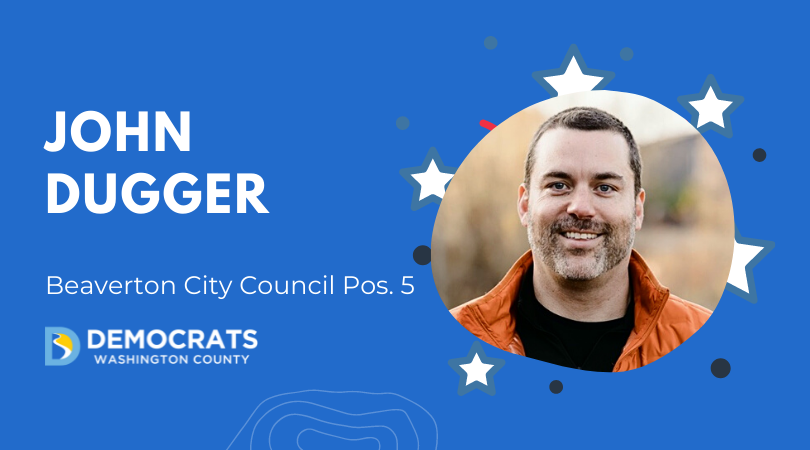 John Dugger is a systems guy. But he is also a guy who is skilled at prioritizing the humanity in a system. A lifetime of experience in building innovative systems from scratch – for his neighborhood, his workplace, his soccer team, his home life – has prepared him to bring these invaluable skills to the Beaverton City Council.

For years, John has gone “kind of crazy” with involvement in his community. You may already be aware of John’s work in Beaverton on the Highland & Central Beaverton Neighborhood Associations, the city’s Budget Committee, at Nike as a leader on the Business, Diversity & Inclusion Team, a co-founder of Pride Beaverton, a co-founder of Highland Helpers, and a husband to Quinn and dog dad to Odin, the Great Pyrenees who is often out and about with the family in the town center.

His campaign website provides a thorough breakdown of how he aims to connect people and process to make Beaverton work better for everyone and details his Hometown Beaverton Plan, which lists specifics in an almost checklist-like manner. It’s clear to see the plans he has developed in helping the city think about “Intentional Inclusion.” The theme of inclusion resonated throughout our hour-long conversation. There is no question that he has clear ideas, plans, and a skillset to work collaboratively as part of a team – but it’s the deeper insights he provided about who he is and what he is all about that highlighted the kind of leader has been and will be.

As a longtime member and original member/organizer of a local LGBTQ soccer team, he mentioned that he had really never even kicked around a soccer ball much growing up. Reflecting on the process of learning to define who he was as a person, coupled with the fact that there were not opportunities for LGBTQ youth to experience the fun a team sport can provide, he wanted to find a way to connect sports to an underserved community. It was sometimes hard for other people to see how exclusionary it could be at times, but he remembered that feeling and it has pushed him to fight for change. The mantra on his soccer team now is “If you have never kicked a ball, come play. If you are a professional, come play.” It is intentional. It is fun. It is inclusive. And it is what this community system is all about.

In his neighborhood, he was the co-founder of a grassroots group called the Highland Helpers. Again, bringing people together – no matter what their backgrounds – to serve the common good was the goal. It was why he helped build a system for a group of neighbors who gathered in a local coffee shop, surveyed their neighbors to assess need, categorized resources, and began to help where they could. John’s skills as a systems management executive, and his ability to connect on a human level with people resulted in actionable steps that filled a need.

He describes a leadership style of people he admires who put the needs of the community always at the forefront of the decision-making. A defining experience came from Julie, a mentor at Nike, who recently made a decision to move from the private sector to do the hard, important work of changing lives in the world of education. A career change which seemed unlikely, but was driven by her heart and a skillset that she knew could serve the common good.

When asked about the leadership style of Beaverton’s Mayor, Lacey Beaty, he commented, “ I love how representative she is, she is intentional about inclusion (women, veterans, POC, LGBQIA+) and as a community member I see her actions – it’s not just words… it’s her actions.”

With a relatively new Mayor, a new governmental system in Beaverton, and a high turnover rate on the Beaverton Council, John hopes to bring stability and a skillset that complements the existing leadership. “There is always an opportunity to get better around engagement – I would like to see a formal engagement model.” Hosting listening sessions in neighborhoods, and really feeling the human part of the city is essential in understanding the immediate needs. Right now, the community’s cry for focus on pedestrian safety is something he has been hearing in neighborhoods for years. John’s leadership will connect those voices to the policy-making positions. “We need to continue to build a culture of having everyone get involved and thinking about the problem.” Again, being intentional about inclusion – and that means ALL voices…that includes the ones who may not agree with you.

Someone who worked with John briefly on a Highland Helpers neighborhood project recently commented on social media about John’s leadership: “I voted for John, he will talk to you friend to friend, neighbor to neighbor.” This person – who had different political views from John – posted his support for someone who is a leader who will listen.

A lifetime of leadership and work experience, the ability to work with every person towards a common goal, a strong skill set in building efficient systems, and an emphasis on making sure the city is intentionally inclusive in all policy decisions has set the stage for John Dugger to be a change-making piece to the Beaverton City Council.