Skip to content
Down the Ballot: Nick Kristof Interview

Down the Ballot: Nick Kristof Interview 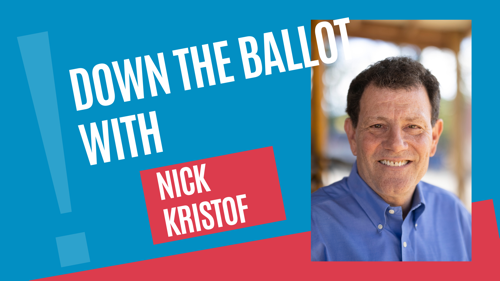 We have a new Down the Ballot interview for you! Welcome, Nick Kristof. Nick is a journalist and political commentator. He has written several books and won two Pulitzer Prizes. His most recent book was co-written with his wife. It is called Tightrope. He grew up in Yamhill county and since retiring from his job at the New York Times has been able to dedicate more time to his friends, family, and the family farm. The farm had been growing cherries for pies for decades but they have transitioned it to grapes and apples for wines and ciders. This interview is very much a chance for him to introduce himself to Washington County activists.

Take a moment and introduce yourself to Nick Kristof!

If you want to learn more about Nick and his campaign:

Democratic candidate Casey Kulla has dropped out of the race for governor and has now filed to run for Commissioner of Labor and Industries. I will try to follow back up with him and the Democrats running for Labor Commissioner later this spring.

As I briefly mentioned in the interview with Nick, his candidacy is currently the subject of a Supreme Court case concerning his eligibility. At the time of this writing, the court has not yet ruled on his residency for the purposes of ballot access. Expect to hear more about this in the news in the coming weeks.

The path that Democratic candidates like Nick Kristof choose is not an easy one in a Democratic Party that has been running the tables on statewide elections since 1986. Oregon has such a small, insular politics that Democrats don’t often get candidates from outside the political establishment that make headway, the way Kristof has done. Steve Sheilds was the last outsider candidate that ran in 2010. He dropped out long before the filing deadline. Both former Governor John Kitzhaber and former Secretary of State Bill Bradbury had already carved up the party, leaving hardly any part of it left for Sheilds to make a convincing case. Go back to 2002 and 1994 and again you see campaigns where outsiders were not present in the Democratic primaries. Democratic voters have gravitated towards candidates with either statewide or legislative experience.

In the last thirty years, it has been Republicans that are far more willing to nominate an outsider. Their primary for governor is usually filled with candidates that have no traditional political experience to being governor. Ron Saxton, Chris Dudley, Bud Pierce, or Bill Sizemore were all on the outside trying to get a seat at the governing table. None of them were successful.

I think those of us that are political insiders sometimes forget that the vast majority of Oregonians and many Americans are not as attuned to politics as we can be at times. I carry with me in all the civic and political work I do the belief taught by former Minnesota Senator Paul Wellstone. Our role is to help put politics back into people’s lives. If Nick Kristof’s campaign is activating parts of the Democratic electorate that don’t typically get involved in our primary, then that’s a good thing for the party. The more people that are involved in the political process, the more representative our politics is of them. That’s a good thing to strive for in our political system. Regardless of how the court rules about Kristof’s residency, his campaign will have taken a very uncommon path for Democrats running for statewide office. I doubt he will be the last to take it.