Skip to content
Down the Ballot: Tobias Read Interview

Down the Ballot: Tobias Read Interview 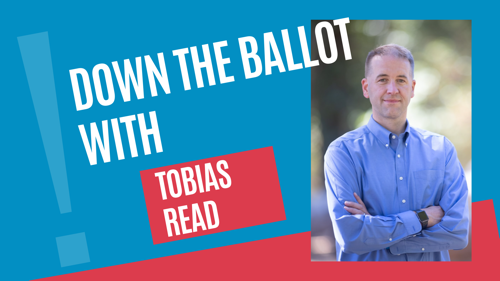 We have a new Down the Ballot interview for you! Welcome Tobias Read. He currently serves as State Treasurer for the State of Oregon and was first elected in 2016 and was recently re-elected in 2020. Tobias spent a decade representing House District 27 right here in Washington County. This interview is very much a chance for him to reintroduce himself to Washington County activists and to introduce himself to all the new folks that have gotten involved since his first meetings of the county party. Still a proud HD 27 Democrat, he lives in Garden Home with his wife and children.

Take a moment and introduce yourself to Tobias Read!

If you want to learn more about Tobias and his campaign:

From Treasurer to Governor: An uncommon path to Mahonia Hall

As I mentioned in the interview with Tobias, making the step from State Treasurer to Governor is not something that is done often. It is not the traditional path of Secretary of State usually taken. Many over the years have tried it and only one has been successful in over fifty years. When all the right things happen though you end up Bob Straub.

He was a Democrat. Straub was a legislator that eventually found himself elected State Treasurer. He was a frequent opponent of the more widely recognized Tom McCall from his era. A photo of McCall and his frequent campaign partner Straub in the corner of the video background. Opponents on the campaign trail, they were rarely enemies and often got ideas and support from one another. Leading McCall to endorsing Straub in his 1974 campaign for Governor.

While treasurer Straub oversaw the creation of the Oregon Public Employees Retirement Program (PERS) that every State Treasurer, Governor and legislator has had to manage politically since. Straub defeated Washington County’s Vic Atiyeh in the general election. Atiyeh would come back in 1978 and defeat Straub, becoming the last Republican to ever be elected Governor of Oregon. You can learn more about Bob Straub by reading the wonderful biography written by Charles Johnson.

Now we are gearing up for 2022 and Oregon Republicans have not held that office in thirty-five years. Democrats will need to organize and continue to put forward policies that Oregonians want to see the state advance. Tobias Read and all the other candidates will each have unique challenges before them to connect with the voters. I hope these interviews over the coming months give you a chance to get to know our candidates and help you make your decision when you start looking down the ballot.