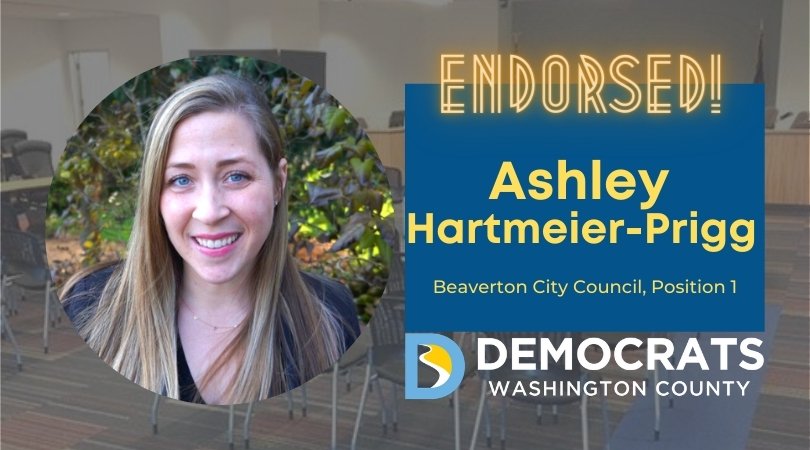 WCD: Your campaign material points to your skills as a consensus builder. What does that look like on the Beaverton City Council?

AH: In all my public-service and professional experiences, I’ve learned that consensus building calls for making the time and effort to ask a lot of questions. If a colleague and I differ on an issue, I need to understand why my colleagues and counterparts have a certain perception or approach to that issue. With that understanding, it’s easier to find trade-offs. I do that at work as a product manager for Nike. And I’ve done that as the chair for the Tualatin Hills Park and Recreation District (THPRD). At the THPRD, we worked to create a more consensus-capable organization by engaging in a formal prioritization process. By acknowledging that we couldn’t do everything all at once, we decided as a body what mattered to us and our constituents most, given whatever time or funding constraints we may have faced. Having a common set of objectives made it easier to overcome differences when they occurred. The same principle applies to the Beaverton City Council. I intend to be inquisitive with fellow council members to find where we have shared goals. Then, if we disagree on something it may be easier to find common ground to help us move toward a decision. Here’s a good example… at the THPRD, we had an opportunity to influence the development of hundreds of affordable homes in our district. To do so, the district’s plan would call for giving up some funding to support an issue that, to some board members, fell outside our mission. The final plan reflected the input of every board member – for and against, making it a better plan for the district and the communities we serve. Approval wasn’t unanimous, but it included and incorporated every voice, which is the definition of consensus.

WCD: Your campaign material lists several priorities for Beaverton, including affordable housing, COVID-19 recovery, accessibility, climate action, racial equity, and transportation. As you think about Beaverton’s most urgent needs at this moment in time, how would you prioritize these?

AH: Our COVID-19 recovery is absolutely priority number one. I am very concerned about what happens when the eviction moratorium ends. I’m concerned about whether this next round of relief will help keep our small businesses going. I think our budget priorities need to be centered around getting through this as a city and a community in an equitable manner. Beaverton is the most diverse county in Oregon. We can’t let people leave here because we failed to preserve that richness and diversity. That might call for delaying some future- or growth-oriented budget items to create funding sources for recovery and rainy days. We need to be nimble and ready to react as the unprecedented events affecting our community continue to evolve. That’s why I like the idea of promoting the local economy with a “shop small” campaign. I am one of the lucky ones whose income wasn’t disrupted during the pandemic. Small business owners and their employees have taken the brunt of this pandemic. City government can help activate us as neighbors to do more to contribute to the recovery. In fact, our success will depend on it.

WCD: You have an impressive list of endorsements from many prominent public servants. Why do you think that is?

AH: I think it’s because I’ve been working to build relationships with them for the last couple of years since I’ve been on THPRD’s board. During the pandemic, we’ve seen how important these relationships have been in terms of serving our community. The reason these endorsements are important to me is that they reflect relationships. We live, work and govern in a dense metro environment where interests and jurisdictions overlap everywhere. By partnering with our neighbors, we can all have the biggest impact. The endorsements I’m honored to have won are an indication that we are prepared to work together as partners on matters of common interest.

WCD: On the lighter side, your website notes racewalking as a hobby. In a city of bicyclists and runners, this is a little uncommon. How did you come to the sport?

AH: When I was in law school, I clerked at a firm downtown. Two days a week, our office manager, Carmen, took a long lunch to coach racewalking at Nike. I volunteered to be on her Hood-to-Coast team that year. A couple of years later when I was working at Nike, I learned that she was still coaching. She offered “Walker Wednesdays”, with beginner instructions like “walk as fast as you can.” The first time, I thought I was going to die. Later, I decided that I liked it. So, I started going to her weekly walks, quickly learning that I am a natural racewalker. I kept walking that winter, and though I hadn’t been racing long, I was pretty fast for my team. In the springtime, I reached out to Carmen and said I had a really wild goal – I want to go to the Olympic trials. Holy Cow! So, Carmen and I set out on a four-year training journey. Ultimately, I didn’t make it to the Olympic trials, but I learned a lot about perseverance and determination. I believe I’ll bring the same qualities to my work on the Beaverton City Council.