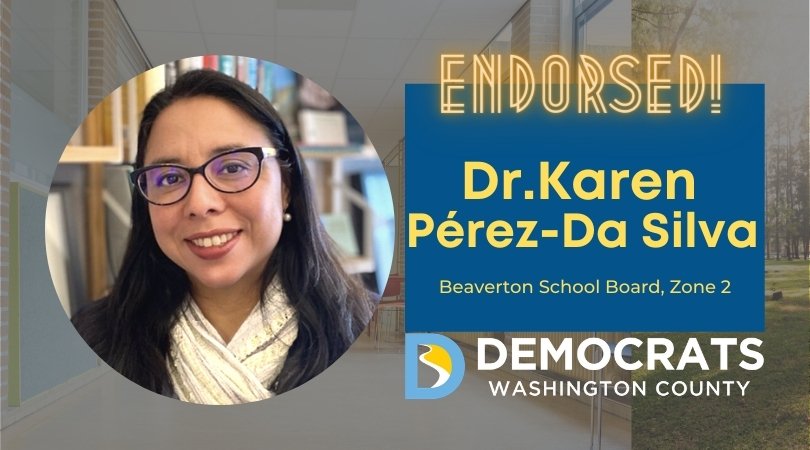 “I come from a long line of strong women,”  says Dr. Karen Pérez-Da Silva.  And she couldn’t be more right.  Karen’s grandmother was a single mother of ten in El Salvador, who built a school on her own property because she wanted to make sure that all the children in the community had access to an education.  Karen’s mother worked for El Salvador’s Ministry of Education and was held hostage at the university during the Salvadoran Civil War.  She was bringing food and medicine for the students there.  “She was let go when one of the people holding her hostage realized she was their teacher and remembered how she had helped them when they were a young person.”

So it’s no surprise that Karen herself is also a fighter and committed to education in her community.  Karen is running for a seat on the Beaverton School District School Board, Zone 2–but she is also a busy Mom, who found some time to chat with me while one of her daughters was working on an online class.

What inspired her to run for office?

“What inspired me to run is seeing where the school district is right now with the impact of COVID, the disproportionate impact of discipline, choosing what curriculum they use, ethnic studies and Tribal History Shared History.  I have the skills and the experience, I’m a researcher, and I’m currently not working in the district, and that makes me want to use my skills.  I have an equity record. I want to support kids at this time.”

I ask her about the disproportionate discipline she mentioned.  “Right now, the BIPOC community is more likely to have more severe discipline–suspension, expulsion–than non-BIPOC students do.  We have an opportunity to look at our policies and make sure they align with what we want to see through the requirements put forth by ODE with the Every Student Belongs rule.  Students are not entering a neutral space when they enter our schools. We want our staff to have professional development, and we want our admins to have the support they need to implement some of the policies that support our students and address hate and bias. We also want our students and families to know what the process is and how it will be handled.  That will get at some of that disproportionate discipline.  It affects our white students too, because they are in that same space and sometimes they are the receivers of hate and bias due to one of their identities whether it be gender, gender-expression, or one of their other identities .”

“Being a brown-skinned Latina growing up in Oregon, I didn’t have the words to describe what was happening around me, when it was systemic oppression, microaggressions.  We want to address the needs of the students, but not in a punitive way.  And we need to educate our staff about how to respond to incidents, possible bias that may be happening in the district.”

In fact, one of Karen’s main priorities, once she gets elected, is to make sure that the district updates its procedures and policies in connection with the state’s Every Student Belongs policy.  “One part of that is that there’s a restriction on hate symbols–no Confederate flags, no swastikas unless it’s part of the curriculum.”  The Oregon Department of Education has put the policy in place, but it’s every school district’s job to implement the procedures, as well as to ensure that the community knows what the procedure is.  Every Student Belongs is tied to school funding, so there are financial consequences for not following the policy.

It’s important to note that while Karen does not currently work for the Beaverton School District, she worked there for over 16 years, including as a kindergarten teacher and a Teacher on Special Assignment.  She also worked as an equity director for the Eugene School District.

Karen is one of the founders of BMEC (Beaverton Minority Educator Community), a group formed in the Beaverton School District to support linguistically and ethnically diverse staff.  She founded the group with Louise Wilmes (past Native Education Leader), Sho Shigeoka (past equity director), as well as Susan Rodriguez, Lisa Burnett and Erica Marson, who are all Human Resources administrators at the district.  “We were trying to bring our communities together, have a conversation and support each other.”  The group worked on figuring out how best to support the students and staff, and how to bring together staff employed across different schools in the district.  “We were looking at having an affinity space so that people could have a conversation, but then realized that people wanted to take action, too.”

Karen is excited to see where BMEC is now and how they are developing.  “This year they had a conference.  They are also organizing a plan for next steps for the district, and looking at anti-racist policies. It’s exciting to see the growth and development.”

When it comes to diversity, Karen has a suggestion for the Democratic party.  Specifically, when the Democrats state their commitment to diversity, and to treating people equitably regardless of race, religion, gender identity, immigration status–”I also wanted to add linguistic diversity.  Being a multilingual person, that’s part of my identity.  There’s discrimination around that, too.”

She is glad that the district has guidelines around ethnic studies and how history is taught in the schools.  “Kids have the right to learn history. Starting in kindergarten, the curriculum asks that we teach certain standards, standards that allow students to see themselves in the curriculum, whether they are of a different race, or of a different gender identity.  For me it’s a non-question.  I’m all for a culturally and linguistically diverse curriculum so that students can have a sense of belonging.”  She is clear in her belief that this kind of inclusive curriculum will benefit everyone.  “It’s not just for BIPOC students, it’s for all students.  Same with the mandated inclusive health standards, they are not just for LGBTQ2SIA+ students, it’s for all students.”

How does the issue of affordable housing affect students in the Beaverton School District?

“I think that housing prices we have had an effect from where students are living and how they are moving through our district.”  She gives the example of an apartment complex which was next to a Beaverton school.  About 80 of the students at the school lived at the apartments.  The complex started out charging $400 a month for rent.  A few months later, it became $600.  Then, the apartments were remodeled and the rent went up to $800 a month.  “But people’s salaries are not increasing.”

“There used to be mobile home parks in the area.  They got plowed over and the new spa area was built.  Those were all our families, too.  The new housing built wasn’t affordable to most of the families that had lived there.  We see the shifting of our students from one area to another–this affects our families greatly.  And with COVID impacts, we have families that lost their jobs, or went from two incomes to one income.  Child care is expensive.  The parents have to make choices about working or not working.”

Karen believes her lived experience gives her an understanding of these kinds of difficult choices.  “I will have that experience as a board member–the experience of being a Mom and coming home from work and taking care of my parents.  And in our family, community extends beyond our family.  So I think about what all kids need.  It’s not about my child or my children, it’s about the community.”

Karen’s journey to becoming an educator is a story of overcoming barriers. Back in El Salvador, her education was delayed, as she could only do two months of kindergarten during the civil war.  When she started second grade at Maplewood Elementary in Portland, she couldn’t read and write, and she couldn’t speak English.  Unfortunately, there were no bilingual teachers at the school.

“Ms. Dodge, my second-grade teacher in the United States, took me under her wings.  She quickly realized that she didn’t speak Spanish and that none of the students in my class spoke Spanish…and she asked me if I could teach them.  I went home and said “Hey, Mom, I need a lesson plan!”  I didn’t see it like I had a problem…I saw it like they had a problem.”

Karen came up with songs and other material to use to teach her fellow students Spanish.  At that time, she already thought she might want to become a teacher.  Ms. Dodge became a lifelong friend who traveled with the family, and was a friend to Karen until she passed away.

A real turning point came after Karen graduated from Carroll College with a biology degree.  She did four years of breast cancer research at OHSU, and thought she would want to go to medical school.

But then everything changed.  “That summer, my aunt said the teachers said your cousin can’t learn.  I didn’t know much about education, but knew that she could learn.”  The cousin spoke only Spanish.  This was when Karen switched to studying education.  She earned two Master’s degrees from Portland State University, in elementary education and special education, and a doctorate from the Lewis & Clark College Graduate School of Education. “Now, I can go back to the school district and say:  “We need tests in English and Spanish.” It was being able to advocate for a family member, using skills to advocate for our community–whether it’s issues around race, gender, learning differences, because my life experience is with that.”

She sees her experience as a continuation of her family’s history.  “My grandmother advocated for education, my Mom was a proponent of education as a way to help her community, and I went into education for the community.”

Finally, she has a message for the students in her district.  “I believe the students’ voice is critical, and I have this message for them:   Your race, color, religion, gender identity, gender expression, sexual orientation, national origin, immigration status, disability status and coming from a multi-lingual family–those things are really your superpower.  You have the right to a high quality education and the right to thrive in our Beaverton School District schools.”