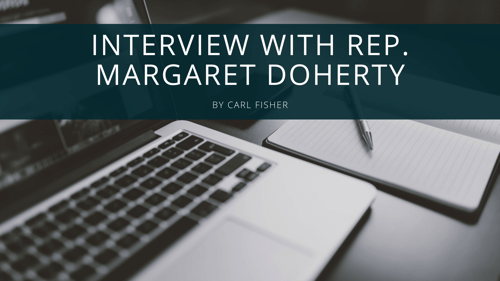 I had the chance to zoom in with State Representative Margaret Doherty and discuss her career as a public servant and asked her to share some advice for future freshman legislators.

We in House District 35 have been extremely fortunate to have had a partner like Margaret in the legislature. She has been a legislator that has reached out to us when she has needed our help in promoting her work and has supported our party both locally and at the state level.

She is a reliable Precinct Committee Person and active Neighborhood Leader. When we were still able to have events she always sponsored a table so that HD 35 Democrats could attend party fundraisers when they might not have been able to afford them on their own.

Representative Doherty ran undefeated in House District 35. In her five campaigns for state representative she earned more votes with every election. She won her first race in 2010 in a bad year for Democrats nationally that led to a 30-30 tie in the Oregon House for the 2011 legislative session. The district remains solidly in control of the Democrats with incoming Representative Elect Dacia Grayber. Here is the number of votes Representative Doherty won for each of her elections. 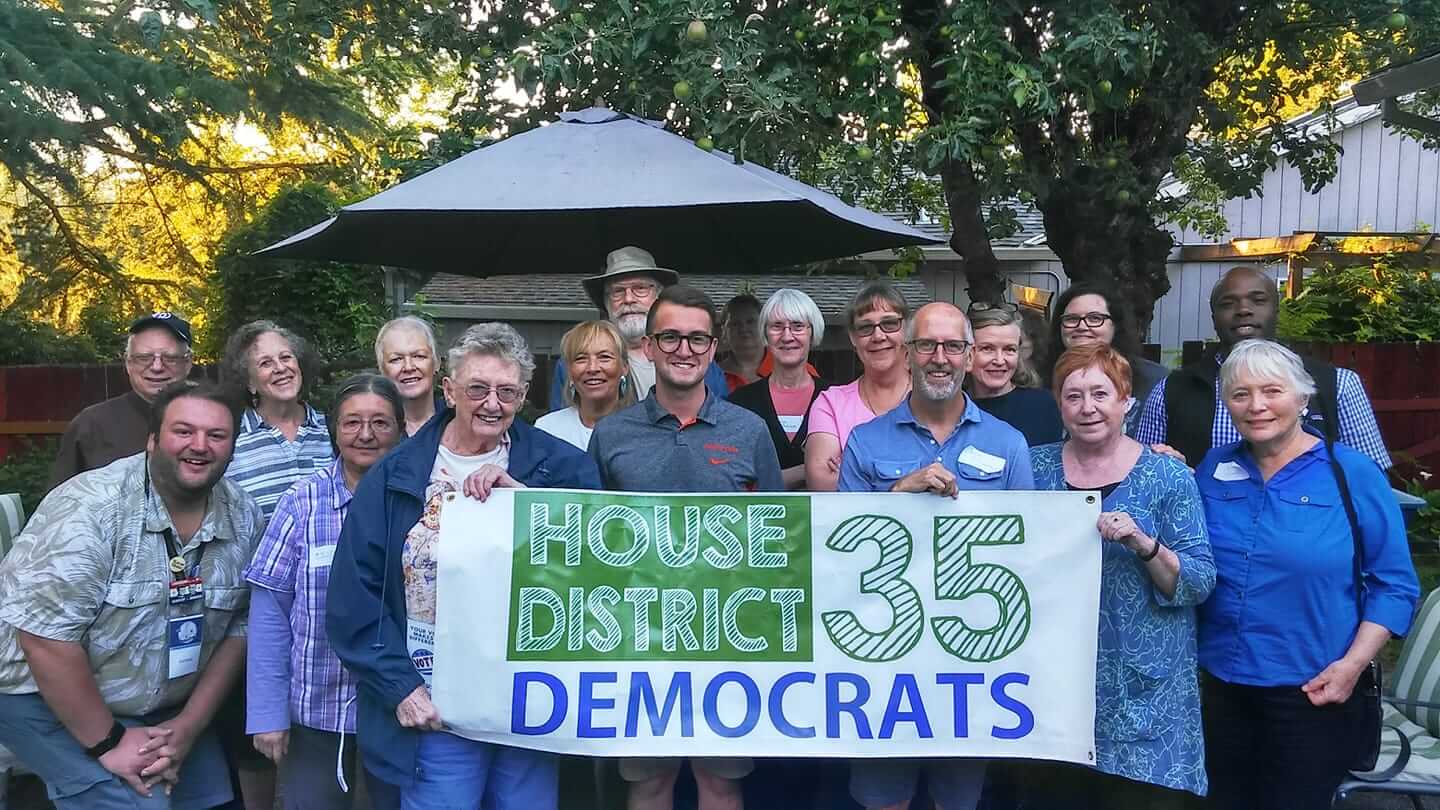 The Friends of Margaret Doherty 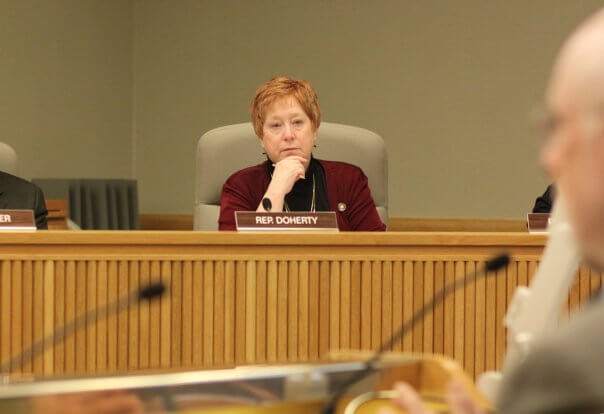 “Margaret’s updates about the legislature have been one of the most anticipated parts of our East Washington County Democrats meetings.  She has both educated and energized people by giving them an inside look at what is happening and why it matters.  Her willingness to give us time – even when she stopped on her way home from a late session – has made a big difference.  I hope she continues to energize and educate us.

While I so appreciate all you do in the community, my personal best Margaret moment was when you shut down testimony from a holocaust denier.  The clarity of your message is something sorely lacking as we confront so much balderdash these days.  Thank you Margaret.”
–Carol Greenough, East Washington County Democrats Chair & HD 37 HDL 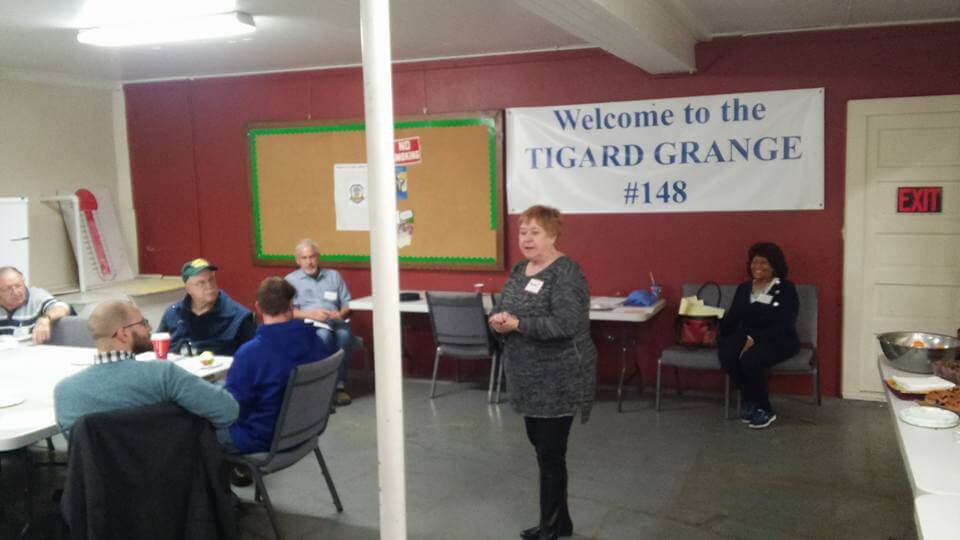 “Carpooling with Margaret was always fun and a nice way to decompress after a long day in Salem especially with the banter that Margaret and Taylor could provide. Catching up on gossip and hearing about the latest updates from ‘The Bachelor’ etc. You never knew where the discussion or jam session would go.

One day, I was getting a ride and we were preparing to leave. Taylor had things to do in Salem and so it was going to be Margaret and I heading back, we were even somehow getting out of Salem a little early (which anyone working in session will relate to that feeling of joy!). We get down to the garage and sure enough the car will not start. The AAA person is nearby, but still it will take a little time to get there, meanwhile all sorts of people are leaving the capitol and our hopes of leaving early were dashed. One set of doors swung open and there was our Governor with her protection detail. Looking confused as to why we were hanging out in the garage. She wished us luck on getting back to Tigard. Finally the AAA person came, and told us that once the car was started, we couldn’t turn it off, without more assistance. This forced an unusual move.

As a legislator, Margaret needed to be back in the building bright and early. By the time we would have gotten back to Tigard, the car rental place would be closed, so we ended up going out to the local Salem rental agency and renting a car. Her mechanic in Tigard told us to drive her car and just drop it off in the parking lot and they would work on it (big shout out to Tyler’s Automotive in downtown Tigard!) So instead of carpooling and driving 1 car back, we ended driving 2 cars back to Tigard. Always an adventure with Margaret!” 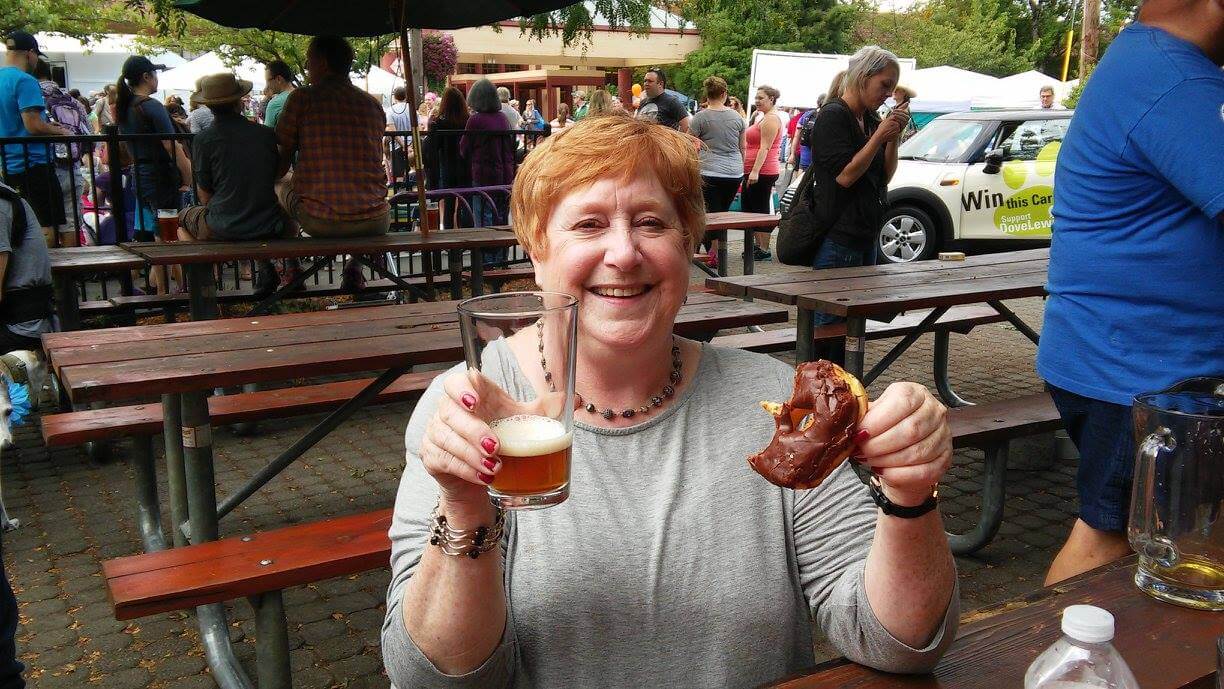 “I first met Margaret when I was WashCo Dems chair more than a decade ago. Larry Galizio had just resigned his seat as HD35 rep to take a position with PCC Clatsop Co.  Margaret called me to meet with her over coffee to learn what the appointment process would be to replace Larry. I was so impressed with her political acumen and her genuine desire for public service. She sailed through the nomination process and has served HD35 for many years and with distinction. I am also proud to call her my friend. We have had many good times together wherever our paths seem to cross in the political world. It is that wicked Irish sense of humor that I have come to enjoy most of all!” 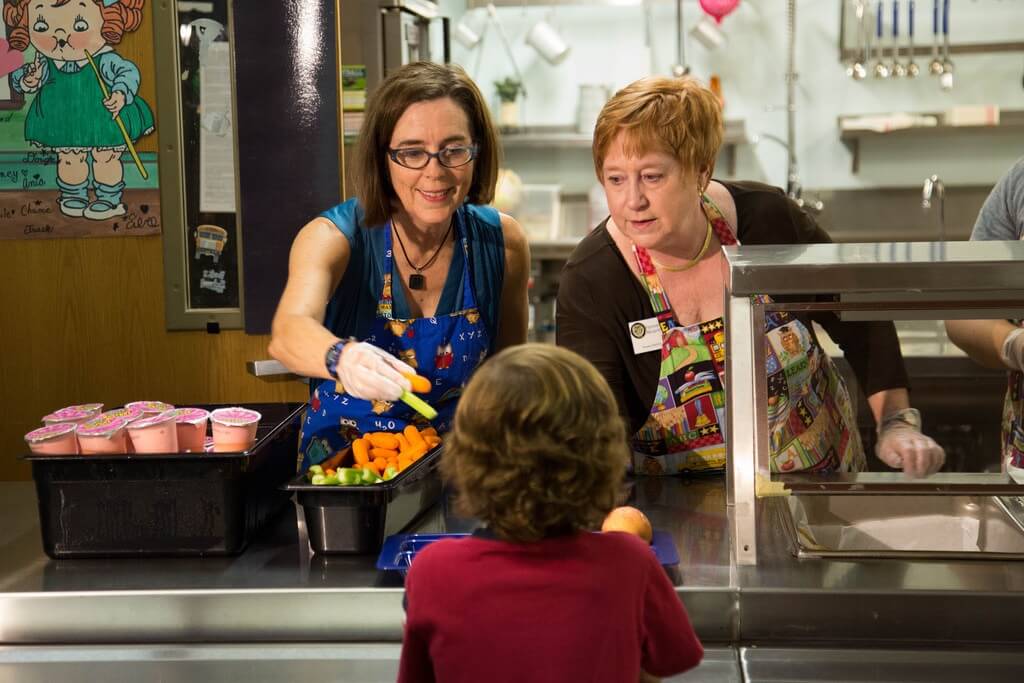 “One of my favorite moments working for Margaret was the bill signing for two of her landmark nutrition bills at Durham Elementary School. One bill eliminated the reduced price lunch “co-pay” and one instituted “breakfast after the bell” to give kids more time to eat. Taken together, and with the nutrition expansion that Margaret championed in the Student Success Act, Oregon is the number one state in the U.S. for feeding children at school. At the signing, Margaret stood on the stage with some excited kiddos as the Governor signed the bills. Afterward, she donned an apron and served meals to the kids with Gov. Brown. One HD 35 Democrat’s child attended the ceremony. When Scott Winkels asked his daughter what happened at school that day, she said: ‘Governor Brown and Margaret paid a bill and got to serve us lunch.’ And she was right!”

“When I was asked what memory to share of my time with Margaret, I spent a lot of time thinking about it. Should it be all the work I did with her to expand access to school meals for underserved Oregon students? Or maybe all the times I watched her fight for Oregon’s workers? Or when she shut down a Holocaust denier in front of the Education Committee? These are all spectacular achievements that speak to Margaret’s incredible awesomeness (a word she would not approve of), but they don’t sum up my relationship with Margaret.
No, the moment that sticks out to me was only a couple weeks after Margaret hired me to run her 2010 campaign. We were sitting at a restaurant across from her campaign office for a working lunch.
It was Margaret’s first campaign and my first time running one. I was only just out of college. I was going over everything we needed to do to win the race. I was talking precinct numbers and field plans and fundraising goals and thought I was doing a pretty good job. However, I had made a critical mistake. I had ordered a really messy dish, one that required me to regularly interrupt my discussion to spit out little chicken bones and wipe sauce off my face.
So, I finished my long explanation of how we were going to win the race and Margaret just looked me dead in the eye and said:
“Peter, you’re disgusting”
That’s a hell of a way to start a working relationship, but it’s one that’s gonna stay with me forever.
Working with Margaret I learned so much. She helped turn me from a callow youth straight out of college and not sure how to work in a professional environment to a young professional who his confident in his work.
Margaret is like a second mom to me, and I cherish her judgement, wisdom and friendship. I hope that we’ll have many more meals together in the years to come, where I’ll order something less messy.” 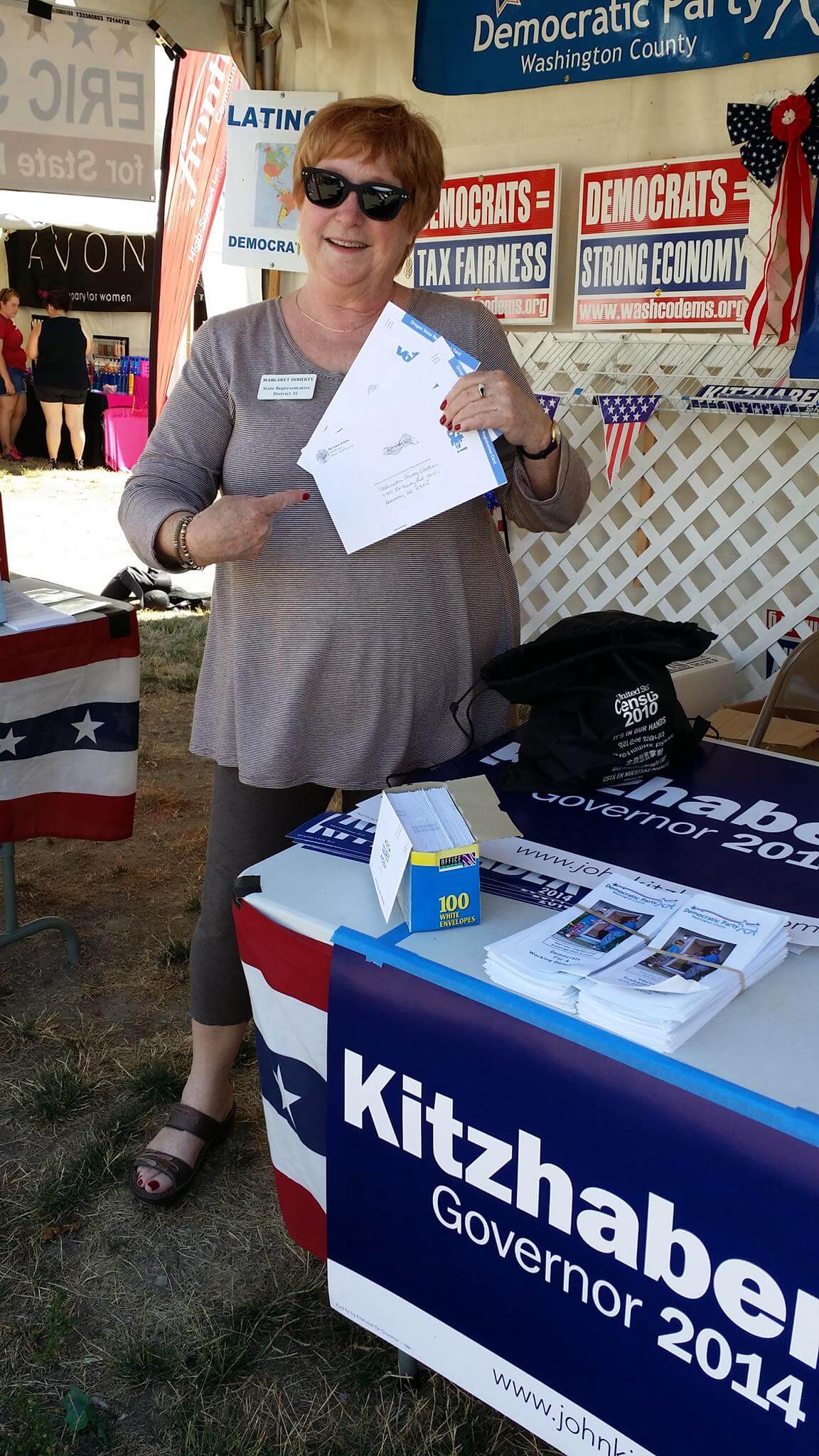