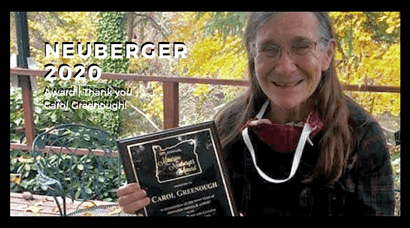 Washington County Democrats’ Maurine Neuberger Award was presented to Carol Greenough by County Chair Patrick Maguire on Saturday evening, October 24. Recognizing Dr. Greenough for her exemplary record of service, decades of making meaningful change in our community and extraordinary personal kindness and encouragement to so many, Patrick described Carol as “one of the best people I know.”

The Neuberger Award memorializes U.S. Senator Maurine Neuberger, born in 1907 in Cloverdale Oregon. Ms. Neuberger began her political career by winning a seat in the Oregon House of Representatives in 1950, where she served alongside her husband (who she campaigned for in 1946 and 1948). Following the death of her husband, who had won a U.S. Senate seat, Ms. Neuberger went on to crush a Republican opponent to become the fourth woman elected to the U.S. Senate and the tenth to serve in that body. In 1961, she was appointed to the Presidential Commission on the Status of Women by President Kennedy.

Ms. Neuberger’s distinguished legislative career included sponsoring one of the first bills to require warning labels on cigarettes (a daunting achievement in light of the industry’s clout in those days). While serving on the Agriculture and Forestry, Banking and Currency and Commerce Committees, she challenged meat packers, bedding manufacturers and automakers – pressing for pollution controls. She supported immigration reform and the elimination of racist immigration policies, and proposed legislation to improve congressional ethics and cap campaign spending. By all measures, she was a Democrat who modeled the party’s values and made a meaningful difference.

The award that bears Maurine Neuberger’s name is presented each year to a Washington County Democratic party member whose leadership, exceptional foresight and core democratic values reflect the best traditions of our party. Past recipients include Governor Kate Brown and Rep. Susan Bonamici. The award is occasionally given to non-elected members with a long history of service to the party. And it is hard to imagine a more qualified recipient than Carol Greenough, whose diligent, kind, hard work over so many years has benefited nearly every elected official in her neck of the woods.

Carol’s political activism began in 1968, when she and some of her college classmates from Wisconsin got “Clean for Gene” shaving their beards and tying back their hair to go door-to-door in support of Eugene McCarthy’s presidential candidacy. Ever since, she has been involved in making whatever community she was a part of better.

In 1969, she joined Volunteers in Service to America (VISTA), which is today a part of AmeriCorps. While there, she was community organizer in Appalachia (North Carolina) where she tutored, registered voters and participated in organizing protests against the Vietnam war. She also contributed to the continued growth and expansion of VISTA. Eventually, VISTA grew to become recognized as the most powerful youth lobby in the country. Carol herself took a leadership role, where she proved to be such a formidable force in discussions with President Nixon’s Secretary of the Office of Economic Opportunity, Donald Rumsfeld, that Mr. Rumsfeld refused to meet with her unless a lawyer was present.

Carol was involved in lobbying congress to preserve VISTA and remembers playing football with members of the Kennedy administration in the halls of the capitol.  Tempted to stay on and work in politics, she decided instead to pursue her PhD in Clinical Psychology. Degree in hand, she then traveled to Alaska, where she served as the Director of Community Mental Health. In that role, she felt compelled to get involved with politics because of its influence on public policies, and their impacts on marginalized individuals.

Fortunately for Oregon and Washington County, Carol came to Oregon in the 80s to be near family. Her first political involvement in this state was working against the anti-gay measures of Lon Mabon.  At that time Basic Rights Oregon was a one room operation and she saw the power that grassroots organizing could exert.  The George Bush presidency got her back to working with WashCo Dems. Her name can be found on a plaque in the Washington County Democrats office that lists the founding members of the Blue Horizon Fund, establishing for the first time a sustained funding source for party support to build a bench of local Democratic elected officials. Believing that politics works best from the ground up, she later helped establish the Eastern Washington County Democrats organization to create the opportunity for more intimate interactions with citizens and their elected officials. Her activities there helped lead to the successful campaign of Rachel Prusak to unseat longtime Republican officeholder Julie Parrish.

Carol Greenough’s powerful history of community activism and support of Democratic ideals includes many inspiring anecdotes. In one such story, Carol describes attending a gathering of the Southern Christian Leadership in Charleston during the public workers strike shortly after the killing of Dr. Martin Luther King. Sitting in the front row in a crowded African American church at the height of the civil rights movement with people from her community, she listened as Reverend Jesse Jackson encouraged his audience. Looking around the room, he included everyone present beginning with “I may be poor. I may be on welfare. I may be black.” Then, looking directly at Carol, Jackson shouted “I may be white!” setting the crowd to cheers.

That story illustrates Carol’s approach to community, policy and politics. Believing that policy is what matters most, she participates in politics to engage communities. She encourages people to get involved, saying that “the more involved you are, the more powerful your voice is.” Carol acts to raise, “the voice of every person who wants to make life better for their neighbors.” Working to engage younger voters, she remembers getting out to the Apple Store in the wee hours of a new iPhone launch to encourage people waiting in line to register to vote. When told by some that “they’re not political,” Carol responded by saying, “Thank you. You’re going to let old farts like me decide your future.”

Carol Greenough’s lifetime commitment to community, involvement and empowerment makes her an inspiring example of Democratic leadership. Here in Washington County, her enormous contributions to our party’s growth and success make her the perfect recipient for the Maurine Neuberger Award. We hope all party members will join us in thanking Carol for all she continues to do and congratulating her on this high honor.