What I learned at the WashCo Dems Justice Forum 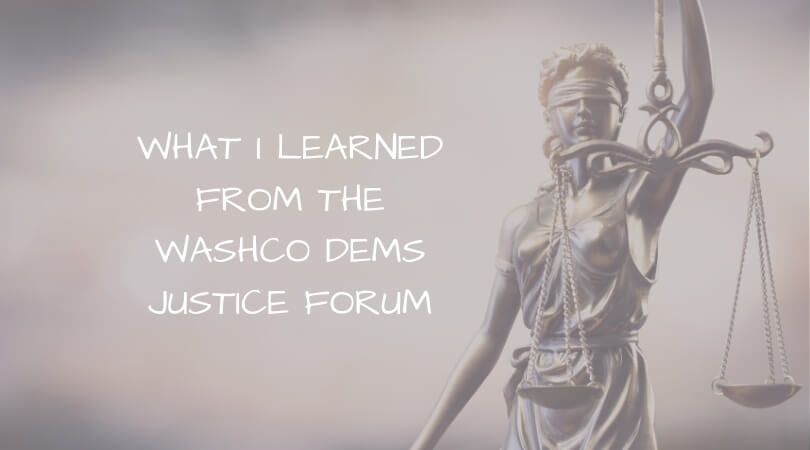 By Martita Meier, 1st Vice-Chair of the Washington County Democrats

On October 30th, the Young Democrats of Washington County put on a virtual event. It was an online Justice Forum which included advocates and political scientists.

The purpose of the event was to have a meaningful dialogue and learning session to help us as citizens of Washington County to better understand the current dynamics of our local justice system.
During the event, we talked about issues pertaining particularly to Washington County, as well as trends that can be seen throughout the United States.

I personally found this forum extremely educational. What I realized during this event was that I have had a sense up until now that there are “problems with our justice system” …but that these were very vague feelings I had. They were mostly rooted in that I knew, systemically, laws are applied, and executed in a biased manner. That has been clear to me for years. How far some police officers go with “the execution of the law” with people of color has been clearly different from how they execute the law when interacting with a white person. The same is true for judgment and sentencing in the courts. Beyond that, I realized I had very little understanding of the system as a whole.

It was mentioned during the event that we all understand our justice system in the way it is meant to exist in its pure form.

In its pure form, we are to have laws that promote safety and well-being, and the execution of those laws is meant to be distributed fairly.
So when we think of law and order, we think about someone who appears to break the law, and the police arrive to arrest that person. Then, that person will be more or less treated fairly throughout the process. They will have an opportunity to pay bail, go about their life, and have a fair trial when the date arrives. This sounds very naive when I say it out loud, but I realized during the course of this forum that I have been still operating from a mindset that this is more or less how things go — there are little problem spots, but we are all striving for this ideal.

Here are some of the realities that I learned during this event:

This is true for any kind of case. So we’re not talking about someone who was indicted for murder. We’re talking about someone that might have been indicted for a petty crime or drug possession. So what was explained was that often people will sign a plea of guilty so they can literally just get back to their lives. It is better to plead guilty and not lose your job than to have your entire life fall apart.
But there is no justice in this! Now you have a criminal record, and that is going to follow you for the rest of your life. So we are basically leaving the vast majority of people with a choice of: pleading guilty and get back to your life: now as a criminal with a criminal record… or, stick it out and have your entire life fall apart.

When it was explained it struck me as quite simple and obvious, but I think many of us just have not had it put forth so plainly. At least I can say that is true for me. This is not a matter that I didn’t believe before. It just was never painted so clearly as it was during this forum.

2) Another thing I learned about was the relationship between district attorneys and the legislative branch of the state. When you have district attorneys who are conservative, they are going to push the legislative branch to create laws that are meant to keep the legal system focused on punishment. So a law might be put in place around tougher punishment for burglary. But here is the disconnect: to the legislative branch (and for most of us as citizens), when a law like that is made, we are thinking of the worst-case scenario. So we’re thinking of this very skilled cat burglar who’s breaking into homes and stealing people’s valuables and electronics. That person that we create the law for is essentially someone who is choosing a life of crime as a means to make their living. The reality is this is a very tiny percentage of people. This is not realistic about how this law will be enacted.

Once a law is put in place, it is up to the district’s attorney’s office to charge people appropriately. However, it is often the case that a district attorney will look to charge individuals with the highest level of crime they can. I had heard this before, but understanding this dynamic really deepened my understanding of how this can create so much damage.

The example that was given is: imagine that a man and his father-in-law get into a bad fight on the phone. Then that man comes to his father-in-law’s house to continue this argument. He steps inside and has now entered the home without being invited in per se. Technically speaking this man can now be charged with burglary. When you hear that it sounds absolutely insane. It’s clear that this has nothing to do with the intention of burglary, but it’s really up to the district attorney if they want to throw that charge on top of something that might be reasonable, such as assault if that argument escalated into a physical fight.

What I realized from this conversation is that it is very easy to tack on additional charges based on how the district attorney interprets the law. This is why it’s so important to pay attention to who our district attorney is, and whether or not they take a viewpoint of restorative justice. The more district attorneys that we can add to our state roster that are actually looking to serve everyone in the community, the more we will impact the legislative branch, the laws that are created, and how they are interpreted.

3) I also learned that here in Washington County it is against the law to sleep in your car. I cannot express enough how appalling this is. The United States is not a kind country to those in need. We all know this. We all know that we are all one to three steps away from homelessness because we certainly never seem to invest in meaningful safety nets for people. Knowing that we’re not really helping those experiencing homelessness, to enact a law where you are not allowed to sleep in your car seems like the ultimate act of cruelty. I am beside myself with disappointment realizing this. We’re not even going to let somebody sleep in their car when clearly everything else in their life has fallen apart? Really?

We can only enact change if we’re paying attention.

Here are some links where you can become engaged locally with advocacy and Washington County:

Thank you to our panelists. I cannot tell you how much I appreciate the time you took to help us learn during this event and I hope we can continue to stay engaged with you.

Thank you to the Washington County Young Democrats Committee for taking the time to put together this event! I learned so much and I have you to thank for it.