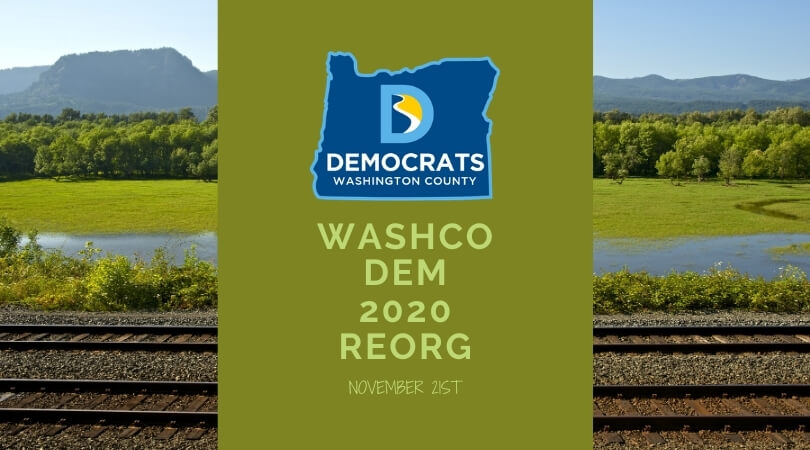 Attend the 2020 Organizational Meeting of the Washington County Democrats

Credentialing begins at 10am, and gavel will drop to begin proceedings at 11am.

Our leadership represents us in various capacities around the county and at the state level.  Chairs of our committees are appointed by the officers of the party.

As an elected PCP, this is your opportunity to help shape the direction of your party.

All are welcome to witness proceedings, and we encourage all to attend.

From the Nominating Committee:

If you are interested in running for an Officer Position, such as Chair, Vice-Chair, Treasurer, or Secretary, please fill out this form.

If you are interested in running for a Delegate Position, such as a delegate for the SCC or CD1, please fill out this form.

Note, both forms allow you to nominate for multiple positions. Please fill each form out only once. Also, if you wish to run for both a delegate position and an officer position, please fill out both forms. The last day to submit to the nominating process is Monday the 9th, however, anyone can self nominate from the floor and run the day of the Reorg meeting.

Thanks!
The Nominating Committee

The Roles of the Officers

If you are considering throwing your hat in the ring to be our next chair, vice-chairs, secretary, or treasurer; or simply want to be more informed when you vote, here are the descriptions for each position:

The Secretary shall keep a book of minutes of all meetings of the Central Committee and Executive Board, showing the time and place of the meeting, the names of those present, and the proceeding and actions taken.

The Treasurer shall prepare adequate records and reports on all Central Committee operational and fundraising financial transactions; meet all campaign finance reporting requirements; provide for the custody and safekeeping of all Central Committee funds; maintain open financial books ready for inspection and review at all times; issue checks in accordance with the Central Committee-approved budget, with the Chair or First Vice Chair as alternate signer; and serve as a non-voting member of the Contributions Recommendation Ad-hoc Committee.

Download this PDF to read the 2020 Organization Meeting Agenda.

Download this PDF to read an explanation of the gender Special and Standing Rules amendment for delegate election.

2. All candidates for officer positions may speak for 2 minutes about their qualifications for office and answer questions for 3 minutes. Candidates will be given signals at 30 seconds and when time is up. If candidates are not able to attend, they may have someone speak for them for a maximum of 2 minutes.

3. Candidates will be ordered on their respective ballots in alphabetical order by last name, using the Oregon Secretary of State’s General Election randomized alphabet. They will speak in the order they appear on the ballot.
● The randomized alphabet is P, M, W, T, F, Z, A, B, I, R, J, H, U, Q, C, G, N, K, L, X, V, Y, D, E, O, S

5. If candidates speak for more than 10 seconds over their allotted time, they will be muted by the timekeeper.

6. Speeches regarding other issues will be limited to 2 minutes per person. Each motion will be allowed a maximum of 10 minutes for debate.

7. Only PCP’s may speak, unless the person wanting to speak is granted permission by a majority vote of the assembly.

8. Participants will be identified as elected PCP, appointed PCP, or guest. (ORS 248.035(3)) Only elected PCP’s may vote in Officer Elections.

9. Officers will be elected by Special Rule of Order #7

During single seat elections for which more than two candidates have been nominated, wherein voting by ballot is the method chosen by the Central Committee, ballots will be created and distributed in the following manner:

10. Delegates will be elected by Special Rule of Order #4.

ELECTION PROCESS FOR DELEGATES TO THE SCC AND CD1CC

Delegate and alternate positions shall be elected by a process that recognizes three gender categories: female, male, and non-binary.

Elections shall ensure that no Gender category shall have greater representation than 50 percent minus one or, in the case of an odd number of delegates, 50 percent. The gender category that is least represented in the Washington County population shall reduce the delegate positions of the other two categories as evenly as possible.

Gender balance shall apply separately for delegates and alternates.

Section 3 – Elections for SCC and CD Delegates and Alternates

Section 4 – Vacancies due to Resignation or Removal of Delegates

In the event of a Delegate resigning or being removed, the Delegation Chair shall:

Section 5 – Elevation of Alternates for SCC or CD Meetings

At an SCC or CD Meeting, if a Delegate cannot attend that meeting, leaves that meeting early, or a delegate position is vacant, the Delegation Chair shall select an alternate using the highest ranked possible procedure below: