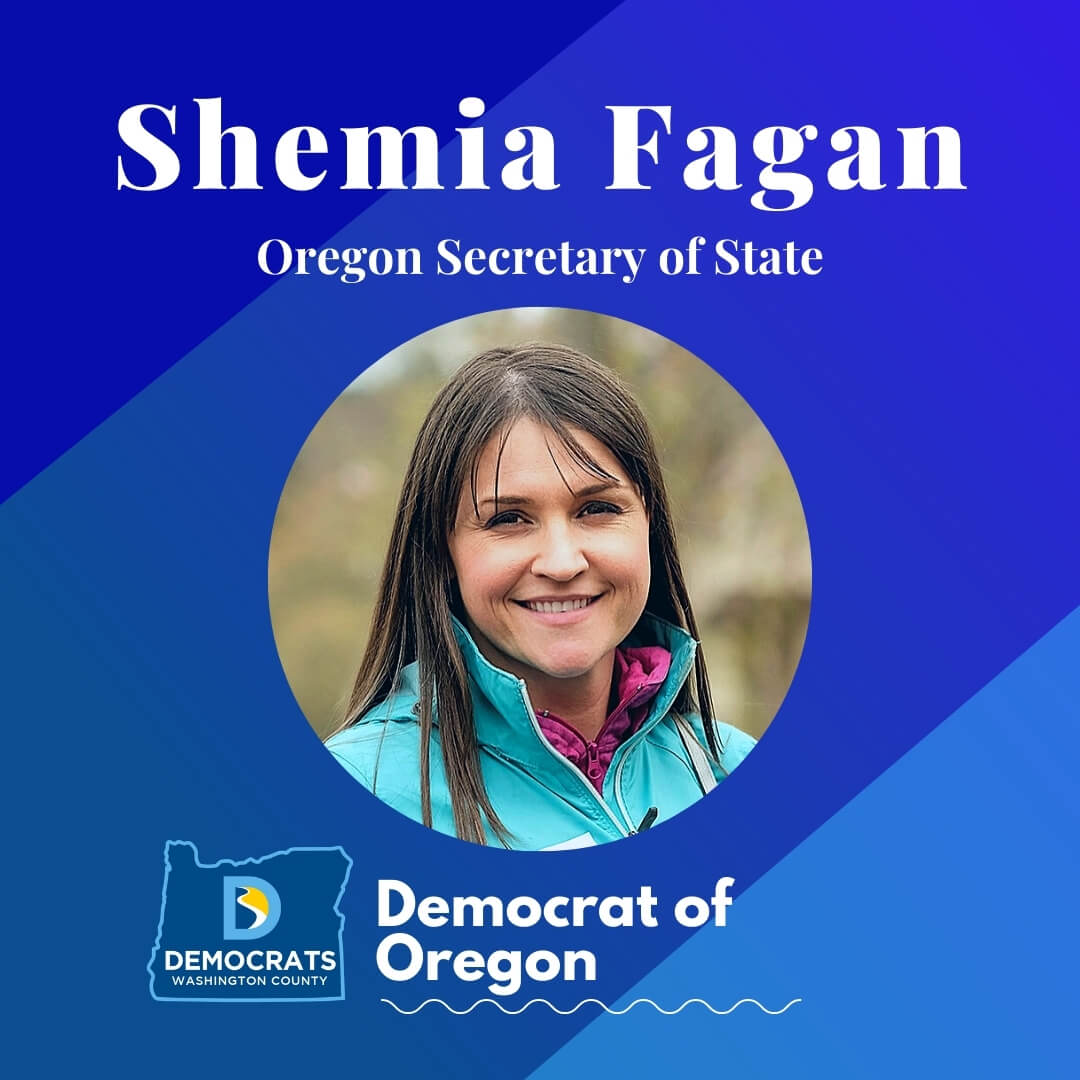 Shemia Fagan has spent her life working in an elected office to help Oregonians. After graduating from law school in 2009, she was first elected to serve on the David Douglas School Board. She has since served in the Oregon House and is now a state senator representing District 24 and is considered one of the most progressive members of Oregon’s senate. Now running for secretary of state, Fagan is working to earn our votes as we ramp up to the November 3rd election.

WCD: You were in a tight primary race with Senator Mark Hass for the chance to compete in the general election. What do you think made you stand out in that contest?


Fagan: I had an incredibly strong coalition of endorsers behind me in the primary, which has only grown as we have moved into the general election. I have a consistent track record of being straight with Oregonians and of standing up for the issues Oregonians care about. Having teachers, firefighters, and healthcare workers behind me showed people that I was the right candidate to fight for Oregonians as we come out of this incredibly trying time.

WCD: What motivated you to run for secretary of state?


Fagan: I grew up poor in rural Oregon, in Dufur and the Dalles, raised by my single dad while my mom battled addiction and homelessness. Public schools and hard work gave me the opportunity to succeed. As an Oregon lawmaker, a civil rights attorney, and a mom to two young children, I have never forgotten those tough times. I’m running for Secretary of State to make sure Oregon families and small businesses hit hard by the pandemic have a fighter in their corner to make sure that the government is working for them.

WCD: I know you helped push Oregon’s first-in-the-nation automatic voter registration law and expanded Oregon’s vote by mail with prepaid postage. Why were those issues so important to you?


Fagan: I believe that when every eligible voter can vote, when every ballot is counted, and when every voice is heard that progress is always within reach. I’ve spent my career making it easier for people to make their voices heard by helping pass automatic voter registration, prepaid postage, and supporting the National Popular Vote compact.

WCD: As you know, voting by mail is currently under attack by Trump who considers it ripe for fraud. How would you like to respond to that?


Fagan: If we told Oregonians five years ago that we’d be discussing vote-by-mail as a hot-button topic, they’d have laughed at us. Vote-by-mail has been working so well for so long in Oregon that most Oregonians would be surprised if you told them voting by mail would be a controversial issue. The fact is that vote-by-mail has worked for decades, and it’s safe. Oregon’s Republican Secretary of State, Dennis Richardson, responded to Donald Trump’s unfounded claims about voter fraud in the 2016 election with an audit. “I’m pleased to report that in Oregon we have reviewed the processes and we are confident that voter fraud in last November’s election did not occur in Oregon,” Richardson wrote to Trump. “In short, elections in Oregon cannot be hacked.” Vote-by-mail shouldn’t be a partisan issue and as Oregon’s Secretary of State, I’ll keep it that way.

WCD: With the fires in Oregon displacing as much as 10% of our population, how do you see this affecting the November election this year?


Fagan: The good news is that Oregon’s vote-by-mail system has people covered if they’ve been displaced from their homes. Any Oregonian who lost their home due to the fires has until October 13th to update their address and their voter registration to have their ballot sent to any location that they know they will have access to. Here is all of the information you need to know Article: “How to Vote in Oregon if You’ve Been Displaced by Wildfires

WCD: In the last few years, foreign interests have repeatedly tried to interfere in American elections. What would you do as secretary of state to increase our election security?


Fagan: Because we conduct our elections entirely on paper ballots, our elections system is very safe. Where we have room to improve is in securing our electronic voter registration system, but the real problem Oregonians are facing is misinformation. That’s why I plan to expand the Office of Civic Education in the Secretary of State’s office to make sure that Oregonians know how to find accurate election information and aren’t fooled by fake news.

WCD: Your Republican opponent, Kim Thatcher famously went into hiding to avoid a critical vote on Oregon’s environmental policy. What are your thoughts regarding that?


Fagan: I was incredibly disappointed by the walkouts. Oregonians paid a price for the walkouts that was much higher than the Republican legislators’ wasted salaries. When Republican legislators like Kim Thatcher walked out, they stopped the passage of safe gun storage, millions of dollars in aid to homeless Oregonians, protections for foster children, clean energy jobs, and two key forestry bills that could possibly have lessened the effect of the Oregon wildfires.

WCD: You have quite the personal story, raised by a single father while your mother battled with homelessness and addiction, how did that background shape your views?


Fagan: I think it’s fair to say that my family was hanging on by a thread. The summer before third grade my dad took us on a camping trip which I vaguely remembered as a couple of weeks of fires, marshmallows, and catching crawdads in the lake. Years later, my older brother told me what really happened: we’d been evicted from our home in the Dalles and had nowhere to go. We were homeless. Oregon’s public schools gave me the opportunity to work hard and get to where I am today. That’s why I’ve been fighting for Oregon families like mine throughout my career as both a legislator and a civil rights attorney.

WCD: Thank you for your time, it has been a pleasure.