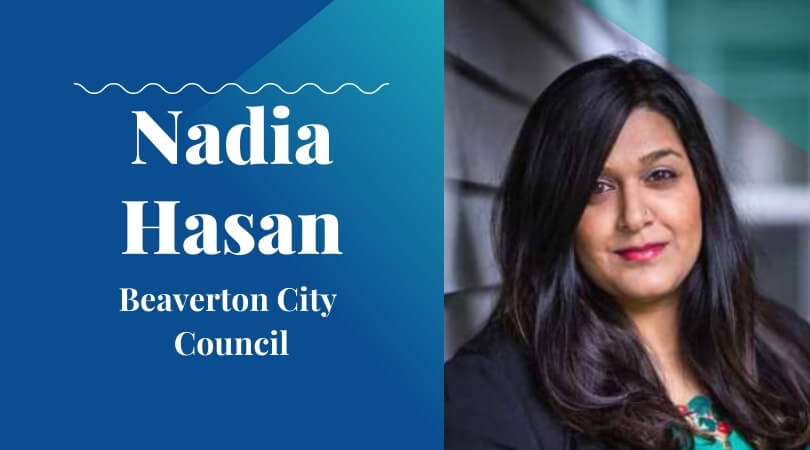 WCD: What inspired you to seek a seat on the Beaverton City Council?

Nadia Hasan (NH): I always knew that I wanted to be involved somehow. When COVID hit, I was struck by how difficult it became for families. The lack of information to help people access city resources and the difficulty navigating those resources when they could be found made the challenges extremely difficult for working people, families, and the marginalized. I’m the child of immigrants and a Muslim woman. When I look at the Beaverton City Council and other elected bodies in our region and state, I see very few people who look like me and have similar stories. I was born in America and raised as an American. My father came here to realize the American Dream. He would tell you himself that he has. But I see the potential for participation in the American Dream diminishing because of the hateful rhetoric and actions of the last four years. We’re better than that. I want to make sure every Beaverton citizen’s voice is heard.

NH: One issue that is fundamental to all of the priorities I’ve stated is education, particularly in early childhood. As the mother of three (9, 6 and 1.5) and a former high school teacher, I’ve seen first-hand how damaging the inequities in access to high-quality education can be. Many if not most of our issues here in Beaverton are the product of social inequity and its impact on education. And though, as a council member, I won’t have direct influence on education, I intend to shine a light on that crucial part of our policy agenda and work with Beaverton School District.

Our campaign has spoken with a lot of Beaverton voters in conversations from our phone and text banks. They’re worried about housing and economic inequality. Too many Beaverton residents are rent-burdened, meaning more than thirty percent of their income goes toward rent. That can make it difficult for them to afford necessities like food, clothing, transportation, and medical care. We need to take steps to help solve that. Economic empowerment is part of the solution.

Voters want a city government that listens and gets things done. When a crisis occurs, they want to know where they can turn and how to take advantage of the assistance they’re entitled to. I want to help make sure we’re there for them.

Q: What elected official, past or present, do you most admire?

NH: As a Muslim and as a mother, I am inspired by the success and influence of representatives Rashida Tlaib and Alexandria Ocasio-Cortez. These women have served the interests of their constituencies with grace and humility, proving without question the value of a government that is diverse and inclusive. And, although she was never elected, I admire Michelle Obama. Reading her book, “Becoming”, I admired the way Michelle’s mom advocated for her daughter early in life to remove her from an inferior education environment. She knew that success in life started with education and was determined to see that Michelle didn’t experience the lifelong disadvantages poor education can lead to. Her action demonstrated the power that each of us has to advocate for ourselves and our kids. As a city council member, I’ll do all I can to enable that kind of empowerment.