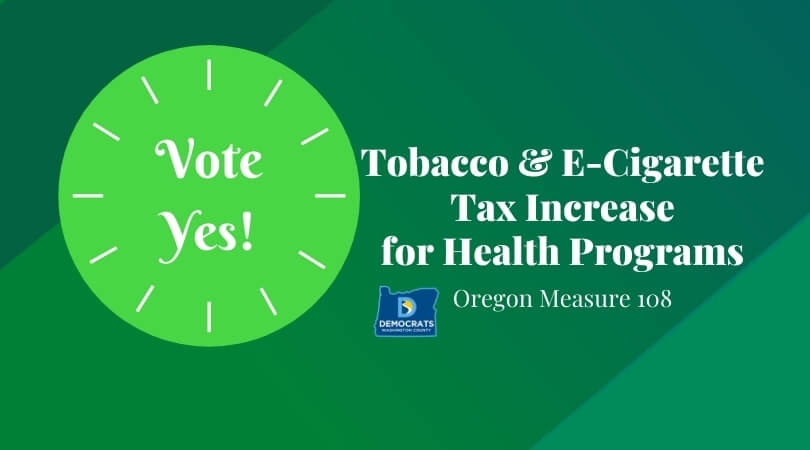 Oregon doesn’t presently tax nicotine vaping devices. This measure would create a new tax equal to 65% of the wholesale price for these devices. It also increases the existing tax on cigarettes by an additional $2 per pack, and increases the cap on cigar taxes from 50 cents to $1 per cigar. The Legislative Revenue Office estimates that the new and increased taxes would more than triple the revenue Oregon presently takes in from tobacco taxes. The money will go to the state’s medical assistance program and to various programs that address the health and mental health issues associated with tobacco and nicotine use.

The legislature referred this measure to the ballot. The bill passed largely along party lines, although at least two Republicans joined Democrats in the majority in the house, and a surprising number of Republicans were absent in the senate on the day it passed.

Yes on 108 is a coalition of Oregon and national health associations. A wide array of more than 200 state organizations have endorsed the measure.

While there doesn’t appear to be any organized opposition to Measure 108, the Taxpayers Association of Oregon urges a “no” vote.

There is relatively a lot of money being spent on this campaign, mostly from large health systems such as Providence, Legacy, and PeaceHealth but also associations of smaller health systems.  Data source:  ORESTAR