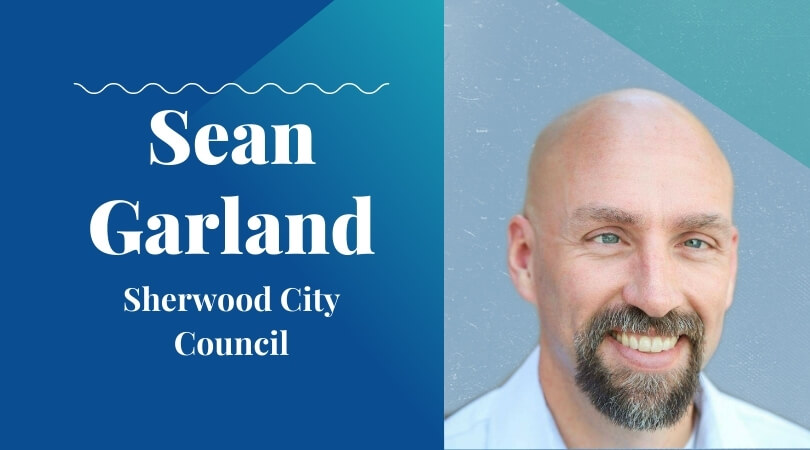 Sean Garland is running for re-election as a City Councilor in Sherwood. Previously, he served as a member of the Sherwood Police Advisory Board for three years. He says that, “During these difficult times, it is important to have stable, consistent leadership.” So I talked to him about what he’s learned as a city leader and what he hopes to do for Sherwood going forward.

WCD: You refer to yourself as a progressive Democrat, and say you represent a growing portion of Sherwood’s population. What do you mean by that?

SG: Sherwood’s traditionally been a small conservative town. But there’s been a lot of growth in the past fifteen years. Many younger families are moving in, and our town is slowly growing more progressive. Therefore, a lot of social justice issues are coming up that haven’t been mentioned much in the past. On our current council, I consider myself to be the most progressive liberal. So, I see myself as a sort of voice for those residents whenever they have concerns to be addressed. For example, I was asked to speak at Sherwood’s Justice for George Floyd rally this summer. I believe that it is important to have a City Council that represents all of its citizens, and I think I bring that balance.

WCD: That’s great! Now, as you know, this is a very eventful election cycle. People are concerned about issues such as mail-in voting and dropbox availability. I understand there has even been some concern in Sherwood about that matter. What steps are you taking to reassure voters?

SG: Well, I’m very active on my Facebook page and that’s often how I interact with citizens. With everything we are seeing nationally, I’ve been encouraging people to fill out and return their ballots early. So, when Washington County removed our only dropbox for maintenance, a lot of concern was raised. Our city staff was quickly in touch with Washington County’s election office to ensure that it was returned as quickly as possible. I’m still encouraging voters to vote early to ensure their ballots are counted in a timely manner so that Trump, or anybody else, can’t claim fraud due to the mail-in ballot process. This is the most important election of our lifetime, and I want to make sure that everybody’s vote is counted. So I’ll be sharing information from Washington County on how to properly fill out and return their ballot.

WCD: Also, in regard to this coming election, I understand you support Oregon’s Measure 110-Drug Addiction Treatment and Recovery Act.

SG: Wherever possible, I like to get away from criminalization and punitive aspects and look to the recovery side of drug addiction. People need to get out of this cycle of arrest and incarceration that is a drain on our criminal justice system. Instead, we need to get them into recovery to actually deal with the core problems and break that cycle to give them the ability to get back on their feet. After all, we are talking about low-level drug offenders who should have a chance to become well-functioning members of our communities. This bill also helps address many racial disparities in drug arrests, and has many supporters, from not only racial equality groups but medical organizations as well. I believe that there is always hope to help people turn it around. And I think this is a better way to deal with this issue for their sake and the sake of their families, and for our society as a whole.

SG: Since 2016, Sherwood has had a ban on recreational marijuana sales and production facilities. To be clear, the current ban does not “keep marijuana out of Sherwood”. However, it does prevent us from receiving the tax revenue that these businesses would generate. Our Finance Director has estimated, conservatively, that $150,000 in annual sales tax would come into the city if the ban was repealed. The way Measure 34-299 is worded, the city tax revenues would go specifically to public safety measures, such as pedestrian safety or additional police officers. And with the proposed zoning for any facilities, these would only be located in our industrial areas. That means that they would not be located near any schools, residential areas, or parks. Frankly, I think it’s fiscally irresponsible not to pass this measure, especially in light of COVID-19 and all the other financial pressures the city is facing. So yes, I am asking folks to vote YES on Measure 34-299.

WCD: As you know, it’s not just marijuana businesses that are under stress. Due to the pandemic, many local businesses are struggling. What role do you think the City Council of Sherwood should play in recovery?

SG: Sherwood’s Old Town district has a lot of bars and restaurants in small historic buildings. Unfortunately, the COVID-19 restrictions hit them especially hard due to space restrictions. Many have closed their dining and shifted to take out. So we worked with them to block off a section of the road to allow for outdoor dining. This was our way of providing them a lifeline, but that will likely come to end when cold weather sets in. So we need to help them even more through marketing and other outreach efforts. The city government needs to be cheerleaders for them so that they can weather this storm. We are also looking at getting some grant money and working with state and federal elected officials to help them out. After all, these businesses are the heart of our community. They do a lot for our city during the many events that we are known for, such as the Robin Hood Festival, Cruisin’ Sherwood, and others. So we must do all we can to keep them going so when this is over, they will still be open and successful. We have to actively engage with our local business owners, to understand their struggles.

WCD: And lastly, every city is currently dealing with calls for police reform. School resource officers are even under scrutiny for the sometimes punitive role they play. What are your thoughts on this matter?


SG: Our police chief is great. Chief Groth has a great relationship with our citizens and Sherwood loves our police officers. Sherwood is not perfect, of course, and we’ve had some complaints from our minority and LGBT community about various issues of inclusion within our city. I take those seriously. Our City Council is working on Diversity, Equity, and Inclusion initiatives to ensure that our city is welcoming to all. When it comes to policing, we also must be proactive and create relationships between our police and our citizens so that we can manage any problems that may arise in the future. Sherwood has a Police Advisory Board that acts as a liaison between citizens and our Sherwood PD. Sherwood has only one School Resource Officer (SRO) for its entire school system, and I’ve long been an advocate for expanding that. But I agree, given the recent national conversations, we must also have those conversations about adding an SRO with our citizens, and importantly our students.

WCD: Good luck. It sounds like you’ve got a lot of change to manage in Sherwood.

SG: Thanks, I enjoy what I do, and I hope to have the opportunity to keep doing it for another four years.