The American Dream is Disappearing Due to Income Inequality 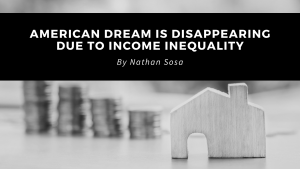 “The American Dream” is a concept that has been ingrained in our national psyche. It is an ideal passed down from one generation to the next which tells us that anyone can succeed in this country if only they work hard.

Yet, the dream is disappearing for many people as our national wealth is increasingly being diverted to those at the top.

Even prior to the pandemic, economic inequality in our nation reached levels not seen in nearly a century. (1) Oregon was no exception. From 1980 to 2017, Oregonians in the top one percent saw their average yearly incomes rise by over 300% from $340,000 to $1,083,000 after adjusting for inflation. (2) Over this same period, Oregon’s median earners watched their average annual incomes increase by a mere 8% from $34,500 to $37,200 after adjusting for inflation. During this time, the top one percent’s share of total state income doubled while the bottom 80% of earners saw their share decline. In 2017 alone, Oregonians in the top one percent received more income than the bottom 50% of the population combined. (3)

At the other end of the economic spectrum, a very different situation has been unfolding. In 2018, despite several years of economic growth, over 13% of Oregonians were living in poverty. This amounted to 516,000 people, including 134,000 children. For a family of four, that meant trying to survive on $13,100 per year. (4) Nearly 70% of families living in poverty have at least one adult in the household who is working. (5) Yet, someone earning minimum wage would have to work 81 hours per week to afford a typical one-bedroom apartment in the Portland Metro area. (6) So, despite our national ethos, hard work is not a guarantee of earning enough for even a basic standard of living. The vast majority of poor people are employed, but still struggling.

COVID-19 has made these socio-economic differences even more blatant. The ability to work from home, access to remote learning, food delivery, transportation options, and the like have exposed dramatic economic disparities. These inequalities often have a disproportionate impact on ethnic and racial minorities. Yet, those who have not suffered the sting of financial hardship may ask why income inequality is a problem.

First, income inequality has curbed economic growth significantly in the United States. (7) This is because those on the lower half of the income spectrum have less money to spend. They also have fewer resources to invest in education and skill upgrades. This was made clear in a recent report that low-income college students are dropping out at twice the rate of their more affluent peers. (8) The stunting of human capital caused by increasing inequality puts us at a competitive disadvantage and leads to less economic growth.

Second, income inequality results in rising crime rates. A London School of Economics study, which featured Portland, Oregon, found that increased inequality led to a rise in property crimes in more affluent neighborhoods while poorer sections experienced less property crime. (9) This rise is due to the fact that low-income jobs are increasingly less attractive to potential criminals than the possible proceeds of theft. (10) Violent crime rates also rise in response to inequality with the results often spilling over into more prosperous neighborhoods. (11) An overall increase in the economic well-being of households in a region, however, leads to lower crime rates.

A concentration of wealth in the hands of a few tears the social fabric and makes our neighborhoods less safe.

Third, income inequality presents a moral problem. As a result of COVID-19, we have seen with renewed clarity how essential are our farmers and nurses, grocery store clerks and delivery drivers, teachers and childcare providers. They and those like them are the backbone of our economy. Yet, so many are working harder than ever while watching their portion of our economic prosperity shrink. While the wealthy take advantage of historically low interest rates and steady returns from Wall Street, millions more have to worry about food prices, housing costs, medical bills, childcare, or the ability to find a job.

A certain level of income inequality is inevitable in a free society. Yet, the dramatic disparities we see today did not occur by accident. They are the deliberate effect of governmental policies designed to divert our national wealth to those at the top. Over the past 40 years, tax cuts skewed toward the wealthy, corporate welfare, and an ever-more complex tax code combined with budget cuts for public schools, reduced social services, and less investment in infrastructure have contributed to our historic levels of inequality.

Now is the time for our elected leaders at all levels to recognize this problem and do all they can to correct it so that everyone has a fair opportunity to realize the American Dream.

For a broader historical perspective on communities which have been excluded from access to the American Dream in our state, take a look at another article by Nathan Sosa, The Economic Legacy of Racism in Oregon.

(7) — Focus on Inequality and Growth, Organization for Economic Co-operation and Development (December 2014) http://www.oecd.org/els/soc/Focus-Inequality-and-Growth-2014.pdf

(8) — Heather Long and Danielle Douglas-Gabriel, The latest crisis: Low-income students are dropping out of college this fall in alarming numbers, The Washington Post (September 16, 2020)