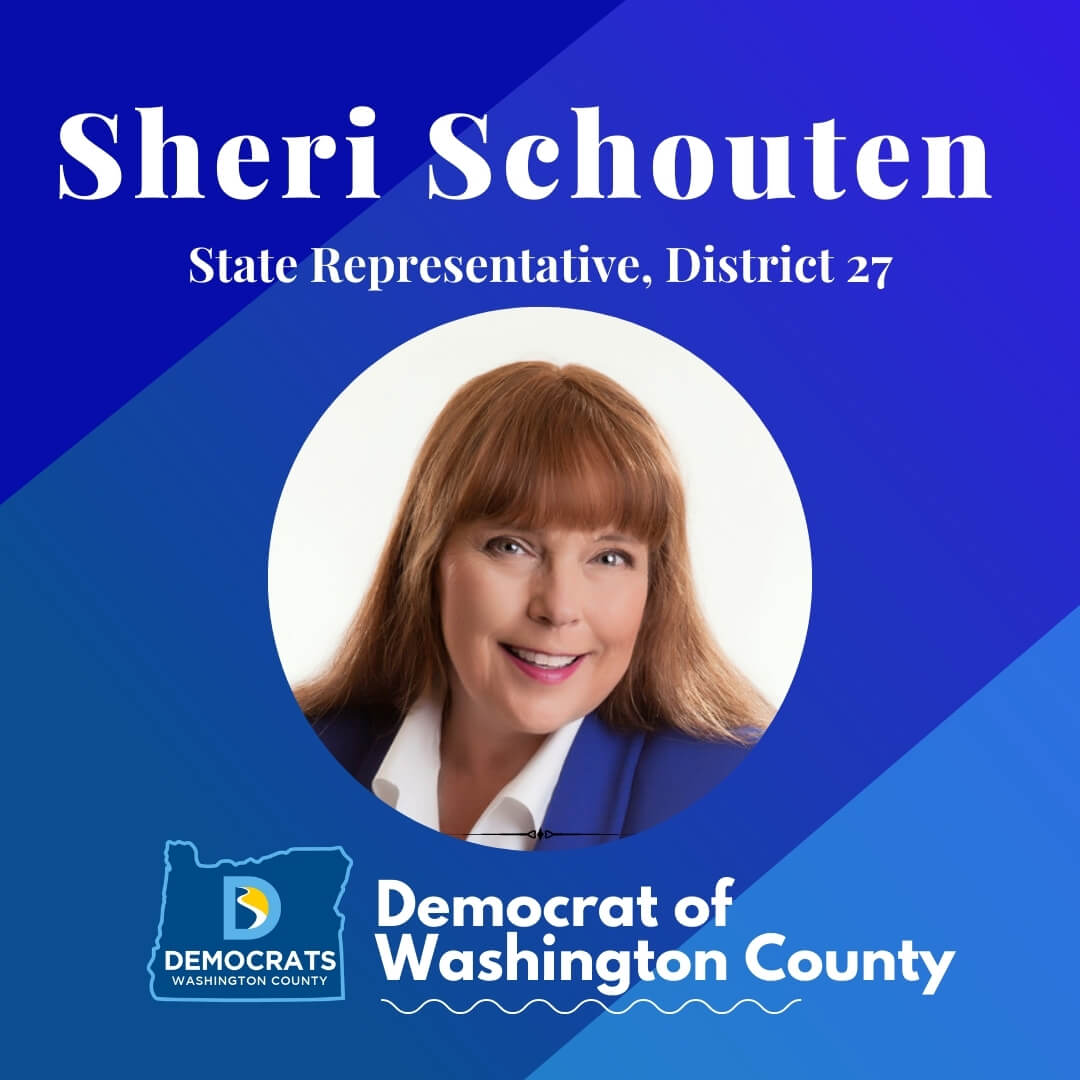 Sheri Schouten spent decades as a public health nurse before running for state representative in 2016. So far she’s sponsored dozens of pieces of legislation, and the hits just keep on coming. Now running again for re-election, I had the chance to talk to her about her experiences in government and her hopes for Oregon’s future.

WCD: So, after thirty-plus years as a nurse, you decided to run for public office. Why?

Schouten: Well, I get that a lot. When you first become a nurse, you’re taking care of a few people at a time. I wanted to work on the bigger picture, the health of a community. So, after a few years at OHSU, I was hired at the Multnomah County Health Dept. I worked with “high risk” individuals in pediatric and maternal care. While doing so, I tried to affect whole communities. Over the years, as I got more familiar with what it takes to make a better village, I realized systemic racism was affecting the health of communities as much as diseases. We need better policy and people in the legislature who understand those needs—that’s why I decided to run.

WCD: Okay, fine. But creating law is often seen as a lawyer’s bailiwick, how does nursing experience help you to be a good state representative?

Schouten: In Oregon, we have a “citizens legislature” so we come from a wide variety of backgrounds. We need people of diverse backgrounds to address Oregon’s various problems. Our legislature must be balanced so you don’t just have one profession’s viewpoint. Nurses look at people holistically, and that approach is needed in crafting legislation. If you don’t understand people and their different backgrounds and viewpoints, you can’t make good policy. And nurses do an especially good job of listening to people.

WCD: Fair enough. Now, your signature legislative achievement is HB-3273 the “drug take-back law.” What’s the idea behind it, and did you struggle to get it passed?

Schouten: Oh yeah, I ran this as a bill in my first session in 2017. It didn’t pass the first time, so I tried again in 2019 and succeeded. The law allows people to return unwanted drugs, turn them in for proper disposal. Flushing medication down the toilet contaminates our community water systems. Criminals steal narcotics they know won’t be missed. People sometimes get accidentally poisoned. Proper disposal involves incineration and incineration cost money. We know big pharma benefits from the opioid crisis, so I thought they should be the ones who clean up this terrible mess. Under this law, pharma companies pay nearly 100% of the cost. Naturally, I faced a lot of resistance from big pharma, and initially, all the Republicans were against it. I returned my second term and spent time doing further research. Three other states already had such a program, so I met with all of them. The secret sauce was to partner with populous local governments. I worked with Washington County as well as other larger counties and interested partners. I eventually got Republicans interest. Now that each county was passing ordinances, big pharma didn’t want to deal with a patchwork of different county and city regulations and given the choice, they preferred a statewide system.

WCD: Quite an odyssey, you don’t quit easily. Your website states that you have three main focuses in your work to build a healthier community; healthy public schools being the first on your list. In light of the Covid-19 pandemic, how do you intend to make our schools healthier?

Schouten: Pre-Covid-19, I really stressed that children have to be healthy to adequately learn. Good nutrition, a safe environment, basic social services needs met, etc. That means resources for children and parents such as counseling, mental health and so on. I also think we need to look at the air quality and water quality in some of these older school buildings. Now, post-Covid-19, we need to utilize public health guidelines to keep students and staff safe to be in school. Sure, it is important to get kids in school as quickly as possible, but we can’t be like Trump and just wish the virus away. Once we get the rates of infection down, we can look at opening schools. Rural schools will likely open first due to their dispersed populations. But in all cases, science has to drive our decisions.

WCD: I wish healthy schools were all Oregon’s state government had to grapple with right now. But we’ve just suffered a series of horrific fires across the state. What are your thoughts on recovery?

Schouten: There are two aspects to recovery: immediate and long term. Long term, we need to address global warming. We also need to fine-tune some of our forest management practices. There’s currently a lot of disagreement about that. We need to build consensus—everybody on the same path going forward. In the short term, the most immediate problem is, how do people rebuild once they are out of the shelters. State and federal government, in partnership with the local community and relief organizations, are going to have to come together and work out the nitty-gritty in an equitable manner.

WCD: Your website also states you will fight for a “healthy environment” and a “healthy economy.” Some may see those as competing goals. How do you reconcile that?

Schouten: I don’t see them as competing goals at all. When we work on clean energy, we also need to look at the good jobs it would bring to Oregonians—not dead-end minimum wage jobs, but good technically educated jobs with family wages and benefits. We can train Oregonians to do these jobs of the future. Everything we need to do to clean up our environment involves creating good jobs. So, no, I don’t see a contradiction between the environment and economy.

WCD: Going forward, what do you see as the greatest challenge the legislature will face in 2021?

Schouten: There needs to be a focus on equity. Covid-19 put Oregon’s economic disparity on full display. It’s people who work in the lower-paying, yet more exposed service industry who are at increased risk. Likewise, recovery from the fires needs to be seen through an equity lens as well. The people affected most by these issues need to be part of the solution. We will also need more revenue in this state to deal with that recovery, so we need to look at new ways to generate it. That, of course, circles back to equity. For example, why are tax breaks given to rich people who own very expensive or multiple properties? If you’re buying a two-million dollar home, you don’t need help from the government. We need to stop giving money to the ultra-rich. There are many tax breaks going to people who don’t really need them. If we don’t help people who need it most, it will cost us all more in the long run. So that’s what I see as our greatest challenge in 2021, and I’m going to give it my best.

WCD: Are there any questions you wish I had asked?

Schouten: I’d like to talk about what I would like to see done in the next legislative sessions. I want to work on environmental bills, especially those concerning plastic pollution, electric vehicles, and climate change. I want to expand on the drug take-back program by including sharps (devices such as hypodermic needles and lancets). I also want to bring back an insulin affordability bill and a genetic counseling bill (establishing licensing credentials that currently don’t exist) that were passed in 2019 on the House side but didn’t get their chance to pass in the Senate due a Republican walkout. I am working on many other bill ideas, too, with other legislators. This is the best time for the public to let their legislators know if they have any input into the legislative process.

WCD: Well, best of luck to you, Ms. Schouten. It sounds like you’re on the right track.

Read more endorsements and learn more about Sheri Schouten at her campaign website.