Skip to content
WashCo Dems at the 2020 DNC Convention

The Un-conventional Delegates of the Washington County Dems 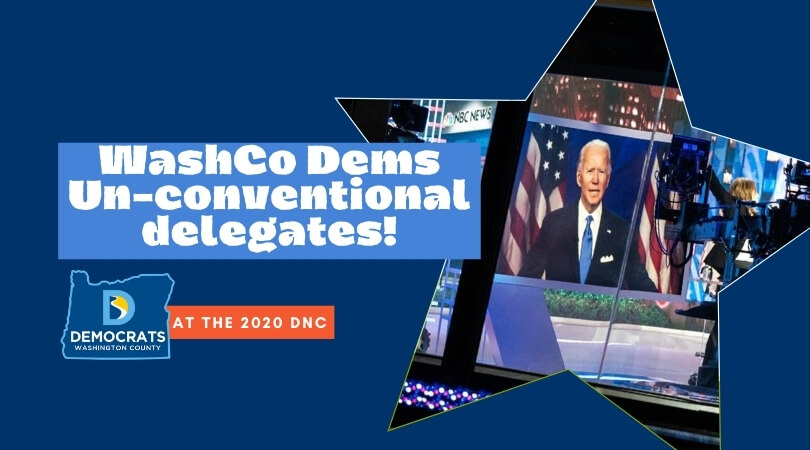 This year the Washington County Democrats elected 13 delegates to the national convention; a huge representation for our county party!  When we ran, delegates were hoping that by August we would have made enough progress against the pandemic that holding some kind of in-person convention would be safe. But, given the lack of leadership in handling the Covid-19 crisis, by May or early June we all saw the writing on the wall. We were preparing ourselves for a convention that would not be conventional in any sense.

It was entirely unconventional. Lacking the ability to be among impassioned masses of people, and unable to make immediate connections or hold meaningful conversations in person with people from all over the country. There were no late-night dinners and parties, nor the ever-present media looking for anyone and everyone to speak to about their passionate issue of the moment.

But, we got enough sleep, and made it to more caucus and workshop sessions. We still connected with each other and others (yeah, by zoom)… and many of us watched the convention in the comfort of our homes in Facebook chat parties watching the impassioned speeches, the amazing roll call (which we all hope will become the norm), and listened to some pretty amazing, inspiring music. I think we all came away strongly motivated to make this election a historic victory for Democrats…as we all know, our lives depend on it.

Let’s see why delegates decided to become delegates… despite the challenges that were looming even back in March and April. What their passions are, and how they saw their participation in this unconventional convention. All Washington County delegates were emailed a list of questions. The following are the responses received (some edited for space considerations). Interestingly, you will see many common themes in the responses!

My biggest concern based on the last platform was how Vote By Mail (VBM)/ Vote At Home elections were treated. In the previous platform, VBM got very little attention; in the 2020 platform it has been expanded upon. COVID-19 is probably the main factor in that expansion in our platform. If there are positives to come out of COVID-19 one of them may be that more voters this year will be able to experience vote by mail and hopefully push their state legislatures to adopt it permanently.

I hope that by helping Joe Biden we can give the American people a leader that actually listens and empathizes with the people they were elected to serve. It’s time we had a president that is there to serve us, not themselves, and their own family’s financial interests. I thought the delegate selection process this year was interesting. Not being able to have district and state conventions in person allowed us to open the process up to Democrats that traditionally may not have participated had they needed to devote a day to a convention. More people got to participate and that’s a good thing. I’m looking forward to being part of this historic election and helping Joe Biden and the rest of our ticket win in November!

I’ve been organizing Democrats ever since I was in middle school. I started paying attention to the political landscape during the 2004 Presidential election cycle. The decision to run was driven by my passion for political organizing as well as increased representation of Asian American & Pacific Islanders. I’m a first-generation Filipino-American and grew up not seeing myself represented in media or politics, and often found myself wondering why there was this lack of representation and poor education about the injustices and diversity of our nation. The 2018 mid-term election was an eye-opening moment in history because many young women of color ran unabashedly bold campaigns that won against the status quo. Having the opportunity to serve as a delegate is an honor and cannot express the validation it brought to the work I’ve been carrying with me all these years.

I’m an avid supporter of Reproductive Rights as Healthcare, Mental Health and Chemical Dependency Treatment, Immigration, and Climate Change. Personally and professionally, I’ve been impacted by these issues.

It goes without saying that this convention is historic due to the pandemic and how horrible (horrible!) Donald Trump is to our country’s institutions – and frankly how the institutions can be refined to focus on the people’s needs. The decision to hold it virtually demonstrates that we, as a party, prioritized the health and safety of people first. I’m proud that the DNCC made the choice go a different direction and by doing so, it has catapulted the method of vote-by-mail in the national limelight on how we can maintain our Demorcay while staying safe amid COVID-19.

As inundated as we are with Zoom Conference Calls, the silver lining is that I’ve had more opportunities to connect with organizations and people that I would not have done so otherwise. The convenience of connecting digitally has ironically brought me closer to people. The situation with the pandemic in the backdrop in every corner of society has challenged us to think outside of the box and to be more creative about ways to build bridges with one another. I remain motivated to build bridges across Oregon up to the national level. The challenges we face as a nation is a call for action: now is the time to stay engaged and never lose hope.

I have always wanted to be a delegate and considered this a crucial election that, early on, had multiple candidates. I was born and raised in the Milwaukee area and wanted to help Waukesha County (where I was raised) Democrats. I am a policy wonk and concerned about most areas of the platform, but particularly science and technology, foreign policy, good governance and civil rights, education, and health care.

Electing Joe Bien will end the current political nightmare and give us a chance to reestablish our ideal of “in this together”. This unconventional convention so far has been a scramble. Given COVID and Republican vote suppression, it will take all of our energy and wisdom to make sure everyone gets out together, but particularly science and technology, foreign policy, good governance, and civil rights, education, and health care.

I am a proud product of Oregon public schools and an educator who believes education is the cornerstone of our democracy. It was apparent from the moment Betsy DeVos was nominated to be Secretary of Education that this administration was focused on doing everything possible to dismantle public education. I ran to be a delegate to stop the erosion of our democracy and elect a president who believes in our students and educators across this nation.

As an athlete I learned how to give 110%; that is what I am giving to ensure we elect a new president on November 3, 2020. Our platform is full of issues and items that are vital to bringing our country together and allowing our communities to heal from the attacks of the last four years. Education, climate change, health care, and addressing the institutional and systematic racism that is pervasive in our communities are all platform items I am passionate about.

I am honored to be a delegate to this first-ever virtual convention: to lift the voice of Oregonians to not only finalize the nomination of Joe Biden for President but to do whatever it takes to ensure he is the 46th President of the United States. This was never about a trip to Milwaukee; this is about doing the right thing for the right reasons. Our democracy is worth fighting for and I am all in.

I have been a supporter of Bernie Sanders for many years, and when he announced that he was running for president in 2015 I made a decision to spend that year volunteering for Bernie. Bernie’s message speaks to me because he sincerely cares that every single person in this country thrives and has what they need to reach their potential. He believes things such as healthcare, a living wage, decent housing, access to food, and quality education are simply human rights. I knew I wanted to carry Bernie’s message to Philadelphia in 2016, and once he announced that he was running again, I knew I wanted to carry his message to Milwaulkee in 2020. More then ever, after three and a half years of the leadership, we have been living with, I felt we needed Bernie and his message.

I am especially passionate about Medicare for All, a real living wage, free public higher education, campaign finance reform, and a foreign policy based on peace. Also, Bernie’s vision for racial justice, immigration reform, and a Green New Deal should be leading the way.

As in 2016, participation in a convention means making new connections, being heard on a national scene (although of course, zoom can only do so much of that), and being given the chance to express the enthusiasm for those things I am passionate about with so many other people. It also means a recommitment to work for those ideals that Democrats really should be focusing on, which boils down to a country where all thrive, and all can achieve their potential and their dreams. This year’s unconventional convention is a challenge, but I think as Bernie supporters we have made a solid commitment to keep working for what we believe in despite the challenges this convention brings and the challenges we will be facing before and after the election.

I have been planning to run as a delegate since I was 16 years old. I not only wanted to be one of the youngest delegates from Oregon and the county, but also have the opportunity to support a new presidential nominee and a party platform. It’s an honor to represent CD 1 in the convention. I am very passionate about Homeland Security, specifically concerning counter-terrorism and critical infrastructure security. I am also a stark proponent of education, interested in CCSS, higher education administration, and reforming chronically low performing schools.

The Democratic Party’s timely alterations to the convention have been inspiring and dutiful. Their actions have sent a strong signal about the need to trust science, abide by state and local laws, and help ultimately prevent the spread of COVID-19. It also demonstrates the need for strong leadership in a crisis.

I think the process in the delegate elections was outstanding. Barriers around in-person commitments were removed, resulting in many diverse candidates across the state to have a voice and represent the delegation.