“Juneteenth,” A Celebration of Freedom 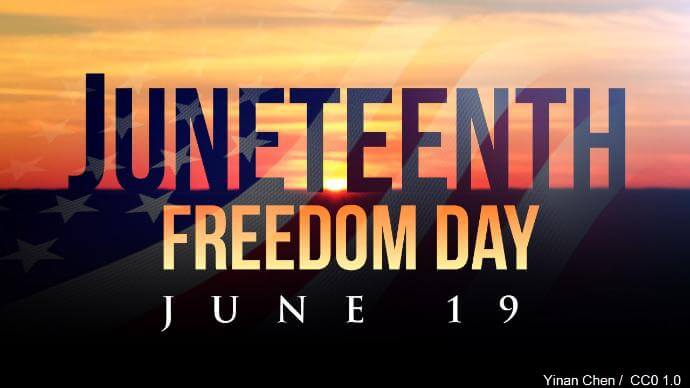 “While Juneteenth is a celebration of freedom, Juneteenth 2020 is bittersweet.  The recent events of 2020, the witnessing of the wrongful deaths of Ahmaud Arbery, Breonna Taylor, George Floyd and Rayshard Brooks, is crushing our spirits and reminding us of the stark reality that the fight for racial justice, equality and freedom for BLACK LIVES continues.”

…indicating the year of freedom from enslavement or even more simply “Freedom Day,” is indeed a remarkable story commemorating the abolition of slavery in the United States.

It was June 19, 1865 when Union General Gordon Granger marched into Galveston, Texas with official news that the Civil War had ended and the enslaved were now free. Granger read General Order Number 3 as follows:

“The people of Texas are informed that in accordance with a Proclamation from the Executive of the United States, all slaves are free. This involves an absolute equality of rights and rights
of property between former masters and slaves, and the connection heretofore existing between them becomes that between employer and hired laborer.”

Amazingly, even in an era of slow communication and a nation at war, Granger was very late with important news of freedom – almost two and a half years after Lincoln’s Emancipation Proclamation ended slavery in the Confederacy, at least on paper. In knowing the dehumanization of even one day of enslavement, I’ve looked for any historical explanations for the delay in delivering and enforcing the Emancipation Proclamation. One version of the story of “freedom delayed, freedom denied” was the tale of the messenger who was murdered on the way to Texas with the news. Another is that the official proclamation was deliberately withheld by the enslavers to maintain the “free labor” force on their plantations. And still another is that federal troops actually waited for the slave owners to reap the benefits of one last cotton harvest before going to Texas. Whether all or none of these versions are true, slavery in Texas remained status quo well beyond what was statutory.

My mind can scarcely imagine the depths of the emotions and the fear of the unknown for the “newly freed” Black men, women and children of Texas.

Yet, it is within this historical backdrop of delay, confusion and terror that we have the beginnings of one of the most inspiring grassroots efforts of the post-Civil War period – the transformation of June 19 from a day of new freedom into an annual rite called “Juneteenth.”

Today, more than 154 years later, Juneteenth-centered activities are experiencing phenomenal growth and flourishing within communities and organizations throughout the country. The freedom celebrations highlight the tradition of bringing in guest speakers and the elders of the community to recount historical events of the past. Newer Juneteenth traditions focus on education and self-improvement, along with future community development, while cultivating knowledge and appreciation of African American history and culture.

What many Americans remember most about Juneteenth is that it is always a joyful celebration of entertaining the masses with parades, musical entertainment, dance, games, and always food — an abundance of wonderfully prepared food. In Portland, Oregon, Juneteenth is combined with “Good in the Hood” for an unforgettable annual community celebration of young and old, family, friends, organizations and business vendors from every corner of the state, along with southwest Washington, and reflects all of our diverse racial and ethnic groups. For sure, no matter how large the gatherings at “Good in the Hood,” I always make my way from vendor to vendor until I have my soul food dinner of corn bread, black-eyed peas, collard greens and bar-b-que, and I always bring my own bottle of red soda water, just in case they don’t have it. One can’t quite celebrate Juneteenth without this original Texas tradition. (And, unless I forget, there’s always a bottle of hot sauce in my purse.)

Among all emancipation celebrations, we are reminded that June 19 falls closest to the summer solstice, the longest day of the year when the sun, at its zenith, defies the darkness in every state, including those states shadowed by slavery.

By choosing to remember the last state in the South that freedom touched, we celebrate the shining “promise of emancipation.” Still, we can never ignore or forget the bloody path America took by delaying freedom and deferring the fulfillment of the simple words in General Granger’s General Order Number 3: “This involves an absolute equality of personal rights and rights of property between former masters and slaves.”
While Juneteenth is a celebration of freedom, Juneteenth 2020 is bittersweet. The recent events of 2020, the witnessing of the wrongful deaths of Ahmaud Arbery, Breonna Taylor, George Floyd and Rayshard Brooks, is crushing our spirits and reminding us of the stark reality that the fight for racial justice, equality and freedom for BLACK LIVES continues.