A Tribute To Doug Plambeck

By Carl Fisher, With Stories From Other Washington County Democrats 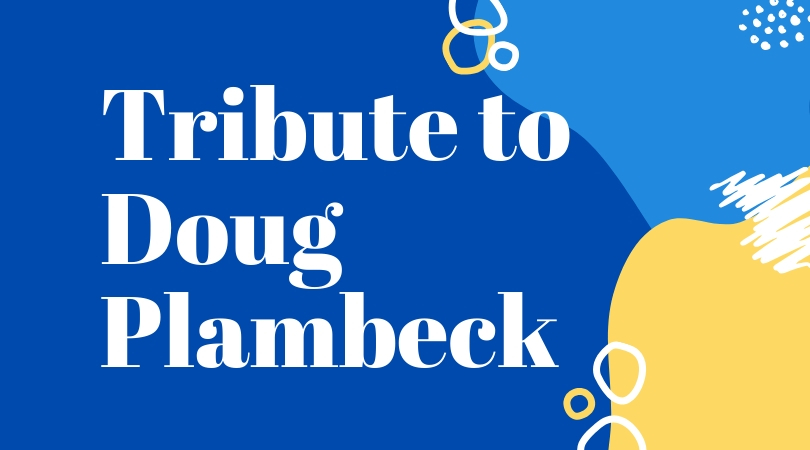 This spring the Washington County Democrats lost one of the most true blue activists we have ever known. Party stalwart Doug Plambeck passed away. My thoughts are with all his family and the Democratic family he helped create during his 40 years of involvement with the Democratic Party of Washington County. Doug was our Democratic leader in the city of Tualatin since 1980.

Based on conversations with him and old newspaper articles, Doug’s political involvement dates back to the Bobby Kennedy campaign in 1968, when he was in high school in Corvallis. Like for many people of his age, 1968 played a pivotal role in his political development and understanding of the world. Assassinations, political turmoil, the war in Vietnam raging on overseas, the fall of President Johnson, and the storm that was the Democratic National Convention all probably helped pique the interest and engagement of young people like Doug Plambeck. Doug was a member of the Benton County Kennedy Action Corps (KAC) in Oregon. KAC was an organization of mostly younger activists that had been inspired to get politically involved after RFK’s assassination. They carried on the policy agenda of the campaign to the state and local parties. The group was pushing three main goals for the Democratic Party of Oregon Platform Convention that summer. They were pushing for stronger gun control legislation, collective bargaining rights for migrant farmworkers, and the creation of a national primary. Doug and his friends were able to incorporate several KAC goals into the state platform.

During the summer of ’68 Doug left his job of seven years as a paper carrier for the Corvallis Gazette-Times to enroll at the University of Oregon and pursue a degree in Business Administration. Think about that, he was 18 in 1968 and had been working for seven years already! Even while away at college during the fall of 1968, he was still keeping up his involvement with the Benton County Democrats. He was involved in Operation Countdown. It was a day for county party activists to travel from one side of the county to another, stumping for the various candidates on the ticket. There were 9 stops on the tour and Doug spoke on behalf of legislative candidate Larry Perry. While he was away at school, Doug was President of the Benton County Young Democrats the year after the election. Doug’s involvement with the Democratic Party really does start some 52 years ago. 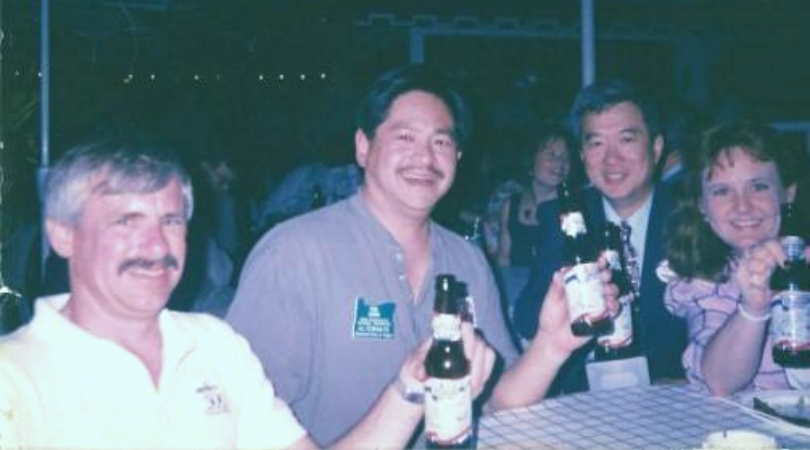 By 1980, life found Doug here in Washington County. He would raise his family in Tualatin, be the volunteer Treasurer and a founding member of Community Partners for Affordable Housing, meet new Democrats at his church, and enjoy a 37-year career at Portland General Electric. As if life were not busy enough for Doug, he was also our elected party Treasurer from 1982 to the early 2000s. Active on party committees, he represented Washington County at countless platform conventions and was involved at the state party level for Washington County. He was one of the few people in the room at the 2019 Maurine Neuberger banquet who attended the first Maurine Neuberger banquet thirty-six years ago and knew Maurine Neuberger. I am sure one of his great political highlights was being elected to the 1996 Democratic National Convention as a delegate.

By the time I got more involved with the Washington County Democrats, Doug was very happy being a House District Leader in Tualatin. During the 2008 campaign, I had become friends with his son and Doug was pleased that I was going to volunteer in Tigard. Doug was always reaching out during election years because of his service on the Endorsements and Contributions committee for the WashCo Dems. He always wanted a little more background on local candidates if he could find some, especially if there was a tough decision to be made between multiple Democrats. When I became Field Director, I had been working with Doug as an HDL for several years and he was one of my go-to people when I needed help for our part of the county. It was over several conversations and some good food that we eventually came up with the plan for HD 37 to take over the responsibility of hosting the booth at the Tualatin Crawfish Festival. This had been the longstanding role of the Community Outreach Committee, and had started back during the time when the Crawfish Festival was more community-centered. I remember him simply saying: “Well, Tualatin Democrats are the ones that live here–we shouldn’t expect people from Hillsboro and Beaverton to organize the booth for us.” That started several great years of Doug and the HD 37 Democrats organizing the booth and the Community Outreach Committee simply providing the materials. Doug, along with Carol Greenough, Joelle Davis, Michael and Kathye Greene, Veronica Williams, Margaret Doherty and Rick North, was our go-to Crawfish Festival Committee. In fact, Doug was so involved in the festival that he would also organize the Community Partners for Affordable Housing booth. Every August, we knew Doug would be ready to get the volunteers organized.

I wanted to be sure that any other friends of Doug who wished to do so, had the chance to contribute to this tribute to him. Here now are just a few stories from fellow Washington County Democrats in their own words. If you would like to add yours, please leave it in the comments section. Doug and I met when I agreed to take over the planning for the Neuberger Banquet way back in 2004. He was treasurer for WashCo Dems and Naomi Ballard was chair. This was my first foray into political fundraising and Doug, ever the helpful mentor, taught me a few tricks of the trade. The most valuable of these was to short the order for meals from the caterer—yes, I didn’t believe it either! But he was right—there are always a certain number of no-shows from people who had paid for a ticket. The smart event planner, according to Doug, knows that secret and can then use the no-show meals for any walk-ins who want to buy a ticket for the event, thus, doubling the take for the same meal!

When I became chair of WashCo Dems, Doug was my treasurer and gave me lots of good advice and was a very loyal supporter of the changes we were undertaking to grow the county party. But as I look back on those days, the most significant contribution that Doug made was a phone call he made back in 2010. He was suggesting we bring back the Neighbor-to-Neighbor program which had been started by Howard Dean some years before and had been discontinued once Obama was elected.

I agreed to at least explore the idea so we had a meeting at a local coffee shop in Beaverton with some of the county party leaders including Doug. And thus was born the Neighborhood Leader Program which has since expanded to most of the counties and was recently taken over by the DPO. In addition, it has been adopted by the Indiana state party and currently is being explored by a number of other states. Our NLP organizing efforts have also been mentioned in the recently published book “Politics is for Power” by Eitan Hersh. Doug’s idea, like so many he had, will continue to influence the GOTV efforts for the foreseeable future. I consider this a large part of his enduring legacy.

Community Partners for Affordable Housing’s (CPAH) is a non-profit affordable housing developer, principally serving Washington County. For the past ten years Doug made sure I attended CPAH’s annual fundraiser event.

It was at these fundraisers I learned Doug served on CPAH’s Board of Directors, and specifically as CPAH’s voluntary treasurer (and a fundraiser) for 20 plus years – putting in over 2,500 voluntary hours of professional financial services to support CPAH’s important work.

Doug was very involved with the activities in Tualatin and with the Washington County Democrats, but I think one of his greatest contributions was his involvement with the Community Partners for Affordable Housing (CPAH). He has given countless hours for decades to the organization that creates affordable housing in our community. Because of his dedication, there are hundreds and hundreds of people that have a place to call home.

Doug was constant, calm and considerate…and also good at tracking budgets. He didn’t get excited and he could be relied on to make sure the work was done. He was supportive and thoughtful.

I met Doug Plambeck around 2002. We served together on the Executive Board of the Washington Democratic Central Committee. He was the well-respected treasurer, and I was the new secretary. When I became chair of the committee, Doug was so supportive of our new ideas, including getting a new permanent office and a member sustaining fund to pay for it. Others were scared, but not Doug. He was steady, calmed, and ready to make the party a place where candidates would find the resources to make our Washington County blue. I was just very, very lucky to be mentored by giants like Doug. He was an amazing father, husband, and neighbor. He would drop literature to his neighbors, even before the Neighborhood Leader program was the “cool thing” to do. My heart broke when I heard of his passing, but really, we should smile and remember him for what he was, a brave pioneer and a “founding father” of the Democratic Party in our beautiful Washington County, Oregon.

As I learn how to cut turf, I have an increased appreciation for how well Doug did this for so many years. He had a true dedication to making sure that people had a connection with the community they canvassed. Riding with him from Tualatin to Dems events, I loved to hear him talk about his history as a young Dem. Both in his work for the party and for housing the houseless, he was motivated by a quiet desire to make the world a better place. Few have done so much with so little fanfare. He will be sorely missed.

I will always be thankful to Doug for being available whenever I needed his wisdom or to simply point me in the right direction. He was always helping me fill in my knowledge gaps. I have been working on creating a listing of the leadership of the Washington County Democrats. As the de facto historian of the local party, Doug was constantly helping me fill in gaps and had even mentioned he had worked on something similar, but his work was on another computer that was not operable at the moment. One of our unfinished projects.

In the run up to every election, he would sit down with me to strategize and would be excited about the possibility of turning HD 37 blue. Getting four House District Leaders for HD 37 in 2016-2017 was very motivating for him. Gone were the old days when it would just be him most of the time. When we finally elected a Democrat in 2018 he simply said to me: “Well, we actually did it! Now we can start working on the County Commission seat in our area.” He was already on to the next task. Doug was a humble person, and I am sure would be blushing right now with all the wonderful things his Democratic friends are saying about him.

Thank you, Doug Plambeck, for all your contributions to our party over these last 52 years. And thank you to Doug’s family for sharing him with us all these years. 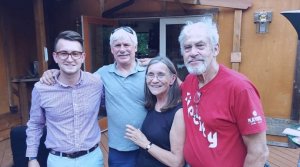