Skip to content
Up Close and Personal – Candidate John Dugger 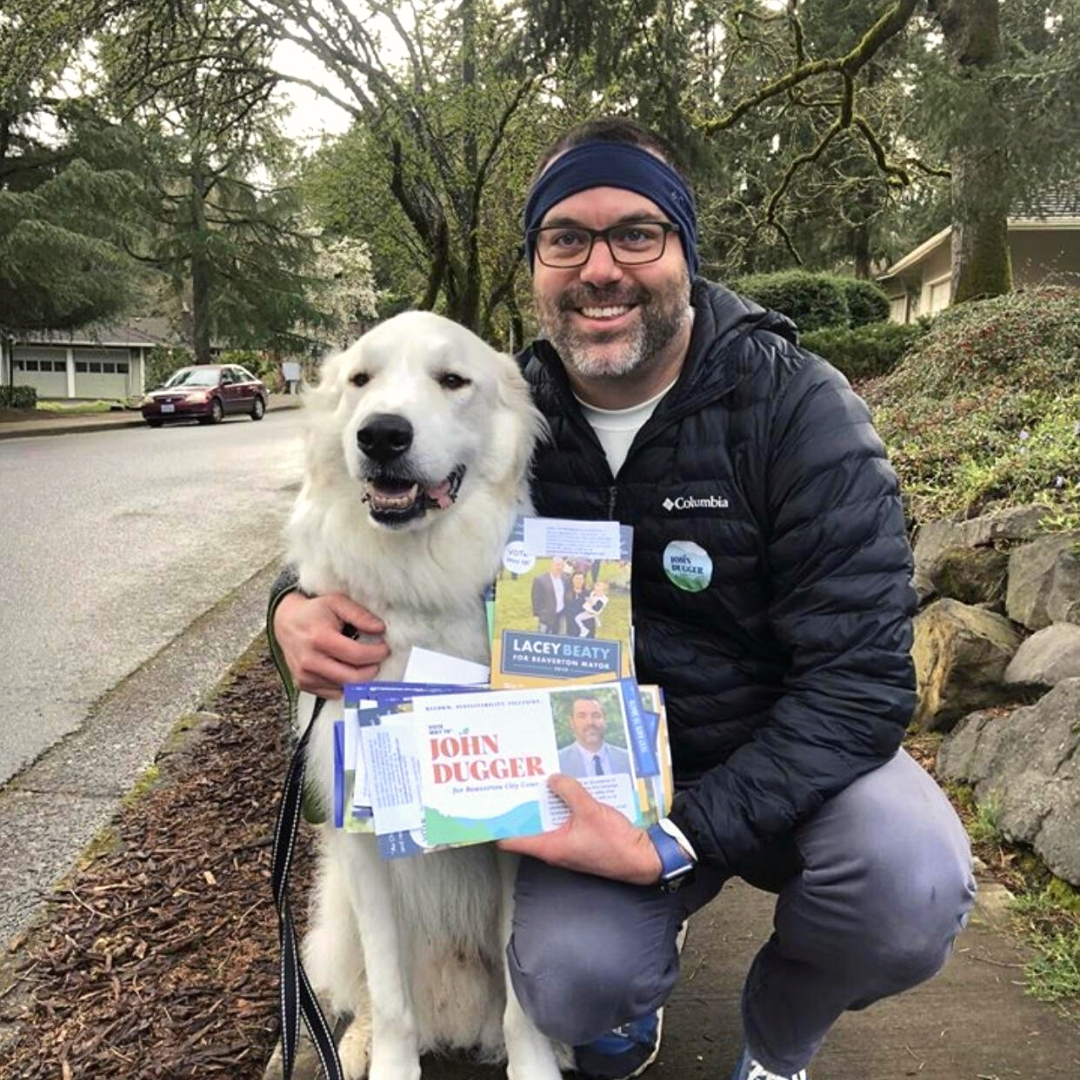 Longtime community advocate John Dugger is running as your Washington County Democrats endorsed candidate for the Beaverton City Council. Having lots of experience in community positions in Beaverton including 2 years as chair of the Highland Neighborhood Association Committee (NAC), he’s one year into a term on the City’s Budget Committee, served a year as an alternate on the Planning Commission, and was a member of the Beaverton Transportation and Capital Improvements Advisory Board. He is also currently serving on the board of the Central Beaverton NAC as its vice-chair.

John moved to Oregon 15 years ago after growing up in a small town in Macclenny, Florida. He welcomes Beaverton and Oregon’s friendly atmosphere and it’s a comfortable home considering he hails from what is now an 80% Trump county back in Florida. Since moving to Oregon he’s completed a B.S. in Environmental Science from Portland State University and adopted his beloved rescue dog, Odin.

For five years John worked at Providence Health System, working on orthopedic implant costs and contracting. He facilitated a 3-year program that saved $60 million in medical costs for patients by negotiating prices and studying outcomes for patients who received implants. These savings were achieved while working within the health system to facilitate clinical quality control, pain levels of patients, patient satisfaction and studying recovery times.

The City of Beaverton’s charter change process got him interested in running for office because of the lack of public input and lack of public demand for it. In two public meetings for the charter 10 of 11 people who attended either asked the council to slow the process down or opposed the changes. Those changes include a change in the form of government to a weak Mayor and City Manager type structure. The city councilors have become disconnected from the community and showed a lack of understanding of community needs with their plan. While some elements of the plan such as removing gender references and increasing the professional management of the city are ideal, the process has been devoid of public input. John urges a No vote to give the city’s citizens more input and to address shortcomings in the city’s current and proposed structure. The charter change also fails to address the lack of a complaint process about city executives outside of the chain of command. Beaverton is too important to depend on the goodwill of one person or a small group of people. He would like to revisit the charter changes and include a true public process, including allowing residents to propose items to include in the new charter. After public meetings in each of the city’s neighborhoods (which would include childcare and translation services to increase attendance), we could then have a vote on a charter truly inclusive of the wishes of Beavertonians.

Co-founding Beaverton’s Pride festival is among one of his most recent successes. The organization is now in the process of getting its 501(c)(3) status and planning bigger each year after having its first parade in 2019 and first pride event in 2018. Also, in the charity arena, he co-founded Highland Helpers, a loose group of volunteers who originally started working together when several families in his neighborhood had situations outside of their control and needed help with childcare and food security. The program has expanded to other projects including some light renovation for needy families and individuals. Highland Helpers has such a small budget it hasn’t been able to get its 501(c)(3) status yet. But that’s in plan someday for this scrappy charity that grew out of posts about helping hands-on NextDoor.

John’s chief campaign promises center in three areas: Transportation in all forms, sustainability in all projects and parts of government, plentiful housing security and expanded supply. You can read about his shared vision for Beaverton in his Hometown Beaverton Plan. The plan has multiple categories with specific actions working towards the principal goal of making Beaverton a unique place that supports its citizens and where its citizens support the government in a collaborative and cooperative manner. John supports placemaking for everyone of all incomes to help Beaverton stand out with unique experiences including food, cultures, and people so we’re not just any suburb in the United States or Oregon.

The Hometown Beaverton plan has many economic elements including:

The plan includes extending access for everyone to walkable, connected and sustainable transit experiences that include multiple transportation options, not just cars. Addressing middle housing: zoning which isn’t all on 7,000 square feet lots with floor area ratios that waste space. “We need more development that yields 800 to 1200 square foot starter-homes, duplexes, triplexes, and ADUs to offer a wider range of housing options at any budget level.” This includes adding funding for system development charge waivers for affordable and low-income projects and clarity on rules for homebuilders. John is excited about the new state law forbidding only single-family zoning which has come into effect and is eager to make this a reality in Beaverton, but we must do it with neighborhood input and involvement. John’s opponent Conservative Councilor Fagan recently abstained from supporting the temporary housing eviction ban during the Covid-19 state of emergency. John calls this vote “shameful” and “disconnected” from the reality of the situation.

Sustainable communities are chief among John’s goals for Beaverton including looking for a way to make Beaverton carbon-negative not just carbon neutral by investing in a formal and widespread street-tree investment program and urban forestry coordinated with the citizens. Also amongst the priorities, are bicycle lanes that offer low and no-carbon alternatives that are safer than cars. John’s bicycle plans include offering off-street routes and paths. The city previously passed an 84-point plan to get to the city to be carbon neutral. Two city councilors didn’t take the plan seriously enough to attend the session, likely to avoid having to vote for it. John would have been there with bells on to vote for the climate plan, unlike his opponent. Also, to round out sustainability John wants to formalize the sidewalk investment program and complete a needs assessment. Seeking ways to reduce congestion and improving mobility will have carbon and economic benefits as well.

On transportation John’s goals include addressing traffic calming in neighborhoods, introducing investments in smart traffic-lights, creating an electric car charging infrastructure plan, introducing a smart parking solution plan for downtown and investing in making public transportation a key feature of Beaverton. Throughout John’s goals the thread of inclusivity for people at all income levels is paramount including those who cannot afford cars.

On government reform, John wants to find ways to build confidence and credibility in local governments by ensuring public input processes aren’t an afterthought but are the main event of the policy process. Further, by revisiting the existing city vision’s action items and updating it for the new decade. Introducing budget transparency by creating online dashboards to track progress. Reviewing and implementing local campaign finance limits to keep our elections people-driven. Introducing instant runoff/ranked-choice voting for all city elections to provide more focus on policy and fewer runoff elections.

John is running for city council to make a difference and change the direction of the city to address the needs of its citizens. He also wants to build a bench of leaders to run the city after him empowered by inclusive public input processes to bring the next generation of good ideas from the idea stage and into policy. He’s eager to be the first elected LGBT+ person and to make everyone including those on low-incomes part of the fabric of Beaverton. The campaign is not accepting money from large businesses and is focusing only on small business and individual donors. Related to lobbyists he is eager to push thru bans on private meetings with public officials and require any input on public proceedings or processes be made in public meetings where they are treated the same as any other constituent.