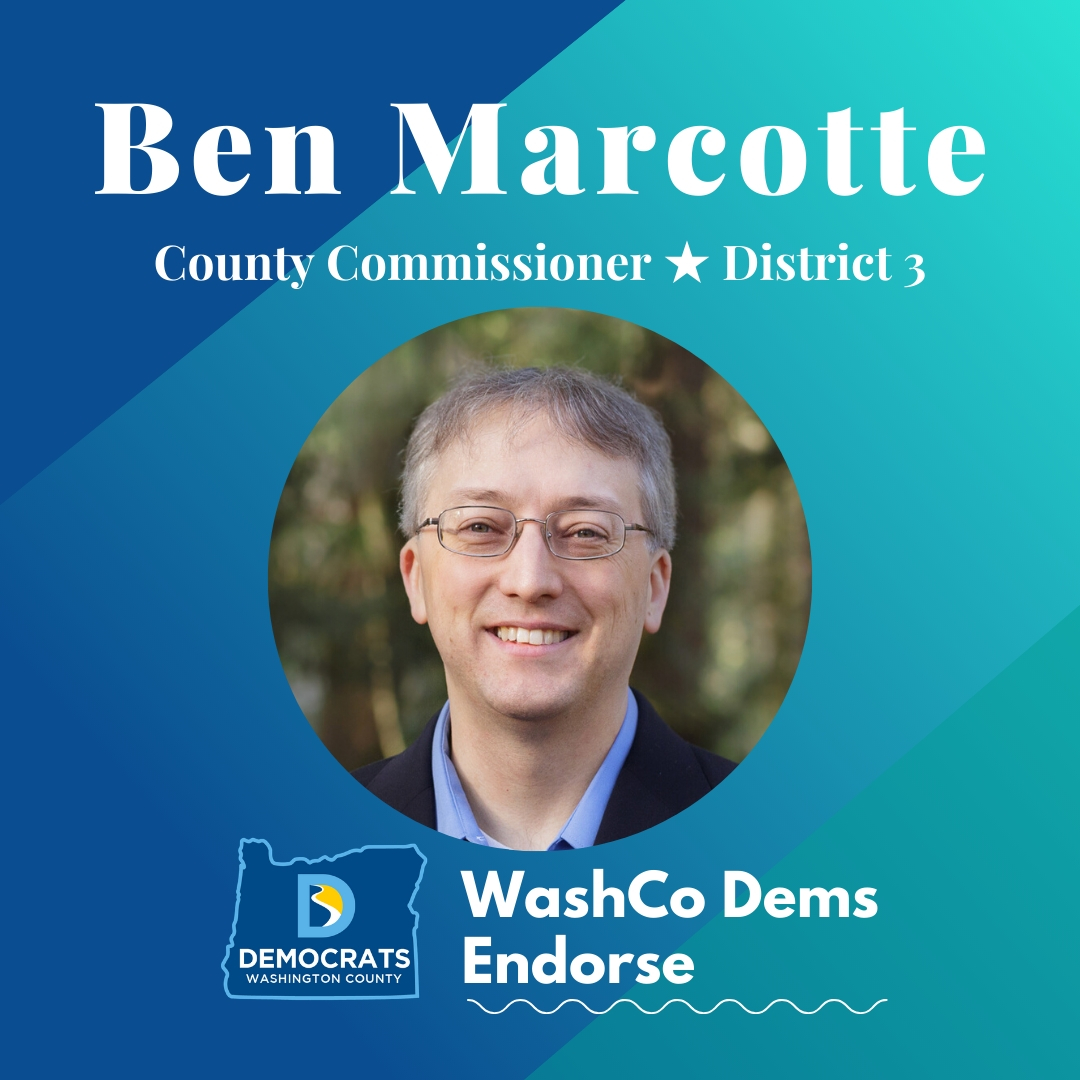 Ben Marcotte is a forty-seven-year-old software engineer who wants to be your next county commissioner. A resident of Garden Home–just outside Beaverton, he’s committed to helping Washington County manage its rapid growth and giving a voice to folks in unincorporated areas. As he points out:

“Washington County has over 200,000 residents living in unincorporated areas without a comprehensive plan to deal with the growing needs of an urbanized area.”

Of course, putting one’s finger on the problem is only the first step. I recently had the chance to chat with him about his campaign and his hopes for Washington County.

WCD: So, what makes you want to run for county commissioner in the first place?

Marcotte: Well, it’s a unique position to say the least. You get to serve people in cities, in urban unincorporated areas, in rural areas and everything in between. Unincorporated citizens rely exclusively on the county commissioners when more urban types would go to city elected officials. Commissioners also play traffic cop between cities, service districts, and the unincorporated areas. For those reasons, I think it’s the best opportunity to improve Washington County as a whole.

WCD: Have you held an elected office before?

Marcotte: No. This would be my first elected position. However, for the past twenty years, I’ve been involved in citizen engagement committees in Washington County. They are volunteer organizations within the county government that seek to find solutions to local problems. But, in time, I came to the conclusion that long-standing issues never seem to make headway in that setting. A more productive relationship with the commissioners would be extremely helpful for getting things done in the county and as a commissioner I can do that.

WCD: Okay, fair point. But I’d like you to be more specific. You’ve said that Washington County needs a comprehensive plan to guide development as our population expands. What do you have in mind?

Marcotte: Referring directly to the unincorporated areas, presently there is no unified plan. Instead, it’s a complicated collaboration of various local governments acting without almost any public participation. Thus far, there is no public input requirement in the drafting of Urban Service Agreements between the cities and the county, which affect large swaths of the surrounding communities. That leads to a full one-third of the county’s population having little to no say in the agreements that affect the future of their neighborhoods. I want to work to create a system where residents have a voice in how the county manages growth.

WCD: Sounds very democratic. But you’re a software engineer with a Bachelor’s in biology.  What makes you the right guy to make such plans?

Marcotte:  Well, twenty years experience in community engagement for one. Of course, my high tech background gives me a leg up on understanding the economic engines of Washington County. And my background in biology helps me understand the ecological and environmental issues that we face. And I will add that both my parents worked in public schools, leaving me a great appreciation for our educators and the service they provide for our community.

WCD: Currently, Commissioner Roy Rodgers holds this position. Why can’t he do all of this instead?

Marcotte: Well, he’s had thirty-six years to try and hasn’t gotten around to it yet. He rarely meets with citizen engagement committees. He seems to prefer working with city governments, at the expense of neglecting citizens in unincorporated areas. Frankly, we simply need new blood on the commission; someone beholden to the people, not the big donors who fund campaigns.

WCD: Unfortunately, this next question is suddenly very relevant. How do you see the long term needs of the county in light of the coronavirus?

Marcotte: This is indeed serious. Much is needed in terms of coordination between county resources and health care providers, hospitals, etc. The county is fairly constrained, financially and otherwise, in what it can do on its own, so we will need to actively lobby state and federal agencies for necessary resources. Also, the enormous economic impact of this is likely to fall primarily on service industry employees who are already struggling. As the situation develops, I expect we will need more targeted measures to address the needs of our working poor.

WCD: I can see what you mean. So, any closing thoughts?

Marcotte: Sure, there are probably a few people out there who think things are fine and dandy as is, and I get that. But I keep hearing from a large number of citizens in this county who crave change, but feel like they have no voice. We have a gulf between the people who have been served and those who haven’t been served in this county. We need to recognize that. Fully a third of our population is grossly underserved right now and that needs to change. And I have every intention of bringing about that change.

Ben Marcotte’s website can be found at https://benfordist3.org for more information.