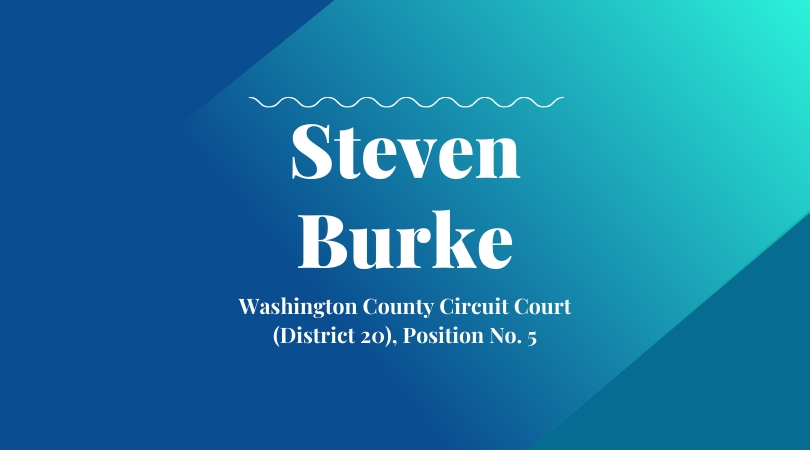 Steven C. Burke is a dedicated member of the legal community who wants to serve Washington County as a judge. To be fair, he has experience that makes him quite the good choice for the job. All his adult life he’s been involved in law enforcement, as a policeman, a lawyer, and as a youth volunteer (more on that later). I recently had a chance to chat with him about his candidacy, and I must say he seemed pretty on top of things.

Burke: Doctorate of Law actually. I graduated with honors from Northwest School of Law of Lewis and Clark back in June of 2000.

WCD: Not too shabby, and now you are a judge with the Beaverton Youth Peer Court?

Burke: That’s right. It’s a judge pro tem position so nobody calls me Judge Burke quite yet. But it’s a great program to be a part of, and I’m proud of what we do.

WCD: And what does the Beaverton Youth Peer Court do?

It’s an “alternative dispute resolution court.” The goal is to help youth who’ve committed infractions of the law achieve resolution based on the decision of a jury of their peers. If they satisfy the conditions of this process, they can have their conviction expunged so they don’t drag along a criminal record their whole life for some mistake they made as a kid. In today’s economy, even a juvenile record can mean the difference between qualifying for a profession, and not being eligible to ever work in that profession.

WCD: And how would they satisfy the conditions?

Burke: There are two ways the court works, depending on a few factors. One works like a grand jury trial with high schoolers acting as lawyers. The other looks like a court trial, with student volunteers acting as counsel for the defendant and prosecution. In the end, the defendants must 1) pay restitution or provide community service appropriate to their offense, 2) participate as a juror for one or more Youth Peer Court cases, and 3) attend a self esteem awareness class to help resist peer pressure. The jury may provide additional requirements based on the totality of the circumstances presented at the trial. All around, the program has been highly successful. My role is to act as the judge and ensure the legalities are adhered to. I also have the power to override the jury decision, provided I find it unfair given the circumstances, which is rare.

WCD: But you haven’t always been in the courtroom. Weren’t you once a policeman too?

Burke: Back in 1996, I attended a mini police academy run by the Multnomah County Sheriff’s Office in cooperation with several agencies, including the City of Hillsboro Police Department. The course provided state certification to work as a Reserve Police Officer for the City of Hillsboro. Like the youth court, being a reserve police officer is a part-time, unpaid, volunteer position. However, there was a period when the city was short-handed, and I worked for couple months as a full time officer police officer, even making felony arrests. Normally that level of work would be rare, but the department was ravaged by a flu bug, and I had the time to give.

WCD: Three months as a cop without pay?

WCD: Okay, so on to the future. In brief, can you give us an understanding of what a Circuit Court Judge is responsible for?

Burke: Gladly. A Circuit Court Judge hears a wide assortment of cases; from criminal, to juvenile, to civil, which includes everything from family law, to probate, to contractual disputes. As such, it requires a judge with a wide variety of experience and a broad understanding of the law. Judges also serve as mediators on civil and family law cases, which serves to resolve cases faster for all involved.

WCD: And do you have such experience?

Burke: As an attorney, I’ve done fifty-four court trials to date. I stopped counting arbitration years go, but there have been dozens. I’ve worked on cases as diverse as election law, sexual harassment, civil rights, business disputes, contract law, real-estate boundary disputes, divorce trials, and even criminal defense. About the only thing I haven’t been is part of criminal prosecution unless you except my time as a police officer. Although I did once get to be a “D.A. for the day” in Multnomah County. That was a treat.

WCD: So that would be a “yes” to my last question. Now, what inspired you to become a candidate for this position?

Burke: Personally, I want to bring more diversity to the bench in terms of legal experience. Frankly, Washington County’s growth demands a wider depth of experience to handle the growing number of cases coming from the businesses that are moving to the county. Today, 70% of our court’s docket is civil, with only 30% being criminal cases. Many of the civil cases can get quite complex, and it requires a judge with a solid background in civil law. When someone goes to court, for good or bad, they want the right decision the first time. Considering all the time and expense goes into litigation, you want the most qualified person on the bench. Of the four candidates in this election race, I have the most diverse legal experience. I have handled cases in just about every area of law a Washington County judge would expect to hear, and I don’t believe any of my opponents could say the same.

WCD: Okay, but as a Circuit Court Judge, what would be your priorities?

Burke: Fairness, professionalism, and mental health court services. As to the mentally ill, we need to provide diversion programs that get these people the help they need, not just put them in the revolving criminal system with no hope. As a judge, I hope to work with the Legislature to improve laws for mentally ill people that come into contact with the criminal justice system. This makes sense from a lot of angles. For example, it costs $40,000 a year to incarcerate someone, but would cost $1,000 to $2,000 a year to provide the medical care and mental health treatment that could make the same person a productive member of our society. They could work, pay taxes, and make a difference. So whether you look at it from a financial perspective, or a moral perspective, there are far better options than the status quo. As a judge, I would have more credibility when trying to motivate stakeholders in the criminal justice system to develop better solutions that we have today when it comes to the mentally ill. Washington County has made some great steps in the past few years, but this issue is really still in its infancy. We have a long way to go.

WCD: You sound very passionate about that.

Burke: It means a lot to me. I have provided pro bono (free) legal work to a lot of mentally ill people over the years, and I have seen first-hand how poorly equipped our legal system is when it comes to the needs of this segment of the population. You have to be fair. I really want to help make the system more fair and equitable for all involved.

WCD: What are the greatest challenges you see inherent in this position and how would you overcome them?

Burke: Honestly, funding is a big problem, the court system needs more staff. That is the obvious answer, which only grows worse with each budget cycle. And unfortunately, I don’t think the judiciary does the best job of advocating for itself. A lot of it comes down to the reality that the general public has little understanding of how the judiciary works, and how much we depend on it. I think one key to solving this lack of understanding is to increase public outreach. Judges really do not get out and interact with the public enough, at least is in a highly visible way. If the public better understands what the court system does for them, they will be more willing to support it. Simply put, we need a more activist judge to advocate for the judicial community to the public, and the Legislature.

WCD: I must say, it sounds like you’ve put a lot of thought into this already. Any closing remarks?

Burke: The key in this election is word of mouth. Please go out and vote and ask friends and neighbors to vote. People need to know who their candidates are and what the best choice is. A lot of people never even bother to vote in any of the judicial elections when they vote. They always give the same reason: “I don’t know who these people are.” I am trying to change that, but I need votes to make that happen.