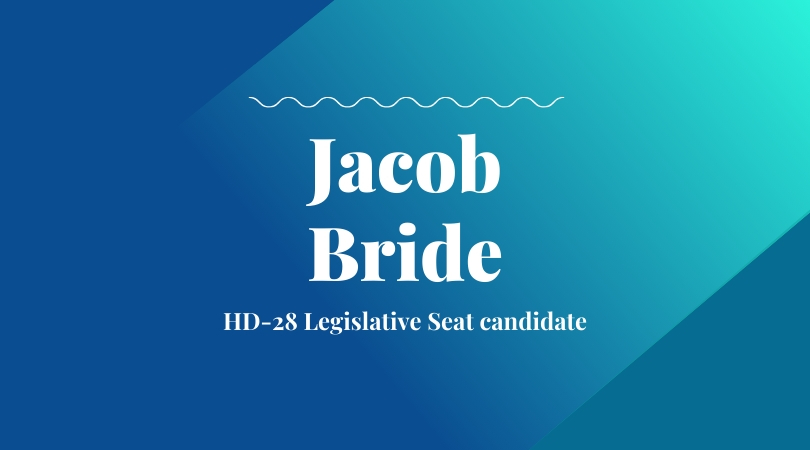 Jacob Bride is running to represent House District 28 in the Oregon house. Having graduated from Aloha high school, a child of a single mother, he went on to serve 7 years in the Oregon National Guard and the Virginia National Guard. While still serving he earned a political science degree and now is almost finished with a masters degree in political management. Among his goals for office are good government and campaign finance reform to fight big money’s control over society.

Throughout his career he’s done some interesting jobs like interning for Congressman Derek Kilmer (WA-6). Working as a Human Resources Specialist in the Oregon National Guard connecting people with the benefits they’ve earned. Working as an Intern in the US State Department Bureau of Political-Military Affairs analyzing arms control laws of other countries and preventing weapons secrets & technology from getting into the wrong hands. In the Virginia National Guard, Jacob worked to prepare units for deployments in addition to full-time course work in grad school.

Earlier in Jacob’s career he worked in an Amazon warehouse, where he saw worker’s rights being abused. He also became aware of how job losses from automation will put millions out of work soon. While working there the company forced viewing of a 3-hour lecture containing anti-union propaganda. Out of the experience working at Amazon he decided to get active in politics and was a 2016 Bernie Sanders delegate from Washington state. Also, while attending George Washington University he participated in the College Democrats campaign committee. Another bit of his political work was working on the Washington Extreme Risk Protection Order for Washington Alliance for gun responsibility campaign.

On the Minimum Wage, Jacob says “I am happy to see the minimum wage increasing in Oregon. Working families need to ensure that they are making a living wage.” He supports having a task force form every 10 years that will analyze the wage requirements to live in various counties and cities across our state. The task force will take into account the average housing, food, healthcare, and transportation costs of these localities. This report will then be distributed with recommendations to various levels of government to make an informed minimum wage decision.

Chief among the campaign policy priorities are a set of objectives for campaign finance reforms including a $1,500 individual cap on donations per person per candidate. A five-year ban on lobbyists from running for office after their last lobbying activity, and using the Secretary of State’s office to vet candidate eligibility prior to allowing them on a ballot for office. Relating to the upcoming legislative referral on campaign finance limits in November 2020, Jacob is eager to work on next steps. Also included amongst the campaign finance platform is a firm $4,500 limit from PACs and corporate groups. Jacob’s campaign is also imposing a voluntary limit of $100 per person for donations to his campaign to demonstrate his campaign is people powered.

On housing Jacob is interested in using long-haul public transit services as a key driver in his policy to ease the housing crisis. By catching up on transit rail services he hopes to ease pressure on housing prices by bringing in workers from other communities to have a larger set of housing within easy commute distance. While housing prices and cost of labor are currently high in our region, the workforce who can afford to live within a reasonable distance isn’t growing to meet demand and impacting blue-collar workers being unable to afford housing. By introducing high population zones near transit investments using land-use changes tied to transit funding he’s hoping to ease the housing supply and maximize the housing and transit dollars. Also, making possible more no-car families which help free up money for quality of life and housing. To pay for these investments, moving towards progressive taxation and closing corporate loopholes to make their effective tax rates look more like their stated tax rates is a priority. Jacob is also in favor of investigating speculation taxes to prevent rapid profiteering from the housing market by investment activity that threatens affordable housing.

Education should have more quality and consistency so that each student is given the same chance for a better life. That is why he supports laws and funding that empowers students at school. He also wants to enact legislation to cap all private student loan interest rates for Oregon students. A problem with federal student loans right now is it expects parents to pay for their adult children’s higher education. Some students are left out of that process and forced to take high-interest private loans. He wants to protect those students who slip through the cracks in federal policy.

Supporting both mental health and schools, he supports increasing taxes to help fund the creation of more classrooms and expanding counseling services. Jacob says “I grew up attending our local schools and saw the impact of large class sizes hurting students. I want to make classes smaller and expand counseling services so that there is more 1 on 1 time for developing students.”

Sticking up for Deferred Action for Childhood Arrivals (DACA) recipients is an important responsibility because we have to protect neighbors from persecution. “That is why I am proud to stand by DACA recipients. While we wait for an immigration pathway for DACA recipients, I will fight to ensure everyone has the same access to drive, work, attain an education, and gain the health benefits they need” Jacob says.
Further along these lines Jacob will support all bills which prevent collaboration of our government agencies and law enforcement from working with ICE to deport DACA recipients. And will also seek to fund Oregon in-state tuition opportunities for DACA recipients to attend college. He will ensure DACA recipients are given the same rights as every other Oregonian and are free to prosper without discrimination.

Medicare For All is a priority and while a state representative can’t make that happen, he wants to use the position to advocate for the policy and support the movement. Until we can get to Medicare For All he wants to help low income people get access to healthcare.

On sex workers’ rights in today’s society, Jacob wants to make laws based on safety rather than morals. He supports the previously-passed bill which allowed sex workers to report felonies without being convicted in the process of reporting the crime. Taking that a step further he wants to ensure sex workers are being given their right to safe and fulfilling employment. Some states such as Nevada have already taken these steps which has improved the health and welfare of those involved. Jacob recalled that “While knocking on doors in the district, I heard the concerns over how there are people in our community who are angry that our neighbors do not have the freedoms they should.” These safety and freedom issues are why he’d bring up a bill to legalize the industry in the House.

On climate change, he wants to make up for the withdrawal of the federal government from sensible energy policy by expanding tax credits for renewable energy production as a top priority. With credits for businesses and multi-family property installations, the business sector can do more to produce clean energy. He’d like to close corporate tax loopholes to find the funding for these tax-expenditures. Investing state money in R&D operations for our state universities to find and market energy efficiency technologies are essential paths forward.

Jacob’s Campaign website is jacobbride.com and he’ll be on the ballot in May 2020’s Democratic Primary for the Oregon House in District 28.

Endorsement Note: Prior to the May 2020 Democratic party primary the Washington County Democratic Party does not endorse candidates in partisan elections. This article is provided for informational purposes and should not be read as an endorsement. Other candidates in this race have been contacted for similar coverage.