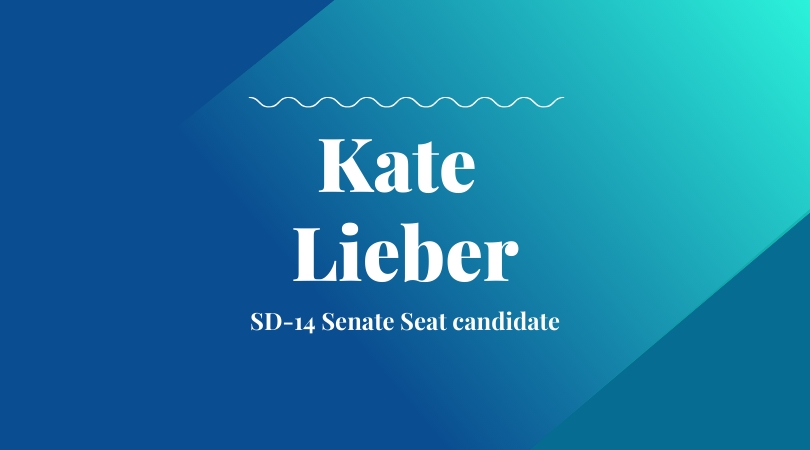 Kate Lieber, a lifelong member of the Democratic Party, is looking to shake up the mostly white, male, and older make up of the Oregon State Senate. She is seeking to be elected as the next Democratic State Senator for District 14. If elected, Kate would be one of a tiny number of state senators with school-age children. She is also empowered by the fact that she would be the first openly lesbian Oregon state senator ever and, at 53, is younger than 80% of the state senate, looking to deliver fresh leadership and perspective.

From a midwestern childhood beginning in Indiana, Kate went on to get an undergraduate degree from Smith College in Massachusetts and a JD (law degree) from Indiana University. She met her future wife in law school in 1990 and they moved to Oregon together. Since then she’s been involved in many elements of criminal justice, serving as Board Chair for Transition Projects, Inc., a non-profit working on homelessness, teaching our next generation of law enforcement and community advocates for criminal justice reform at Portland Community College, surviving a decade long battle with breast cancer, raising two kids, and is now putting herself out there to be a state senator.

Once she moved to Oregon she started teaching at PCC in the criminal justice department in 1998 where she’d return later on in her career. Throughout her career she’s taught courses on criminal law, evidence, introduction to the courts and mental health law. Kate is still active in educating thousands of would be police, parole/probation officers, pre-law, and paralegal students in her tenure at PCC.

All of her time pursuing justice at the Multnomah County DA’s office hasn’t made Kate a tough-on-crime prosecutor. She is an advocate for reforms to prevent the criminal justice system from manufacturing large prison populations, causing the homeless population to swell, and making it difficult for even minor offenders to keep their jobs. She is hopeful to end the practice of non-unanimous juries,  which, while it is something that would make it harder for a DA to convict people, would be the right thing to do. Most notably, Oregon would be the last state to do so if it makes the change to unanimous juries. During her time prosecuting she was alarmed at the unfair bail system in Oregon that causes low-risk offenders to lose homes, jobs and enter a cycle of poverty that could be avoidable by practical bail reform and giving judges more flexibility with bail to not inflict potentially life long damage to someone who is low-risk and hasn’t even been convicted yet. She’s truly interested in seeing justice for all, including those she’s prosecuted. Having deep criminal justice knowledge, she’s eager to bring fresh policy around bail reform so that bails are more equitable and reflective of incomes.

However, more recent reforms were more effective on scaling back some prison sentences, but more needs to be done. Throughout her career Kate’s seen drug and substance abuse lead to incarceration which amplifies homelessness and a cycle of economic insecurity.

Washington County in particular has a high backlog of cases, not enough judges, and is not performing well against constitutional rights for speedy and fair trials. It’s possible guilty people will get away with crimes due to process issues with the courts, and innocent people may be in pre-trial detention too long because of the backlog in cases and unfair bail inflicting uncorrectable life damage.

Kate is eager to find ways to increase staffing for our judicial system’s most needy counties including additional judges in populous counties to give people their day in court sooner.

Despite her history as a prosecutor, while meeting with Kate it was clear that she’s passionate about a fair, and correct justice system and not just what is easy for prosecutors. Despite the stereotypes about tough-on-crime prosecutors, she’s interested in protecting the defendant’s constitutional rights and the public at large. All too often defendants in criminal prosecutions are underresourced and do not receive justice.

For eight years Kate served on the Psychiatric Security Review Board (PSRB) including a number of years as its chair. The PSRB is a Governor’s appointed board to handle cases of the people declared by a court as legally insane and incompetent to stand trial. Kate was appointed by Gov. Kulongoski and served from 2009-2017. The Board focuses on supervising justice, and support and treatment for mental health patients with convictions. Here, she learned a lot about mental health and criminal justice, something she still shares with her students in her classes at PCC today. This volunteer board is essential to the compassionate care for the legally insane and in upholding the constitutional rights of the mentally ill.

Also growing out of her career at the Multnomah County DA’s office, Kate currently serves as the chair of the board for Transition Projects, Inc. (TPI) a non-profit with a $21M annual budget providing services to transition over 1,000 people per year from homelessness to housing. TPI also operates an 800 bed shelter to get people off the streets. Housing is a 21st century crisis that has only been getting worse in recent decades and Kate has been using her talents and results driven focus to work on the issue. In the Oregon Senate Kate hopes to be an advocate for putting resources into homeless prevention and to stop the criminalization of homelessness. One of the most important steps to prevent homelessness is to work on preventing unseen homelessness (like couch surfing) and insecure housing from turning into actual homelessness. The detrimental  effects on mental health from being homeless is staggering, and preventing the trauma from occurring in the first place can go a long way in preventing dangerous life events for our citizens. Preventing homelessness is also less costly over the long-term.

For over 40 years the federal government has been defunding housing while handing out decades of tax cuts to the rich, leaving states to do more with less, and those states including Oregon have not kept pace with the needs. To make matters worse, conservative myths about people in need have been spreading since the Reagan era. Kate hopes to break this cycle by reinvesting in our citizens and looking at housing as infrastructure as vital as roads.

Working on solutions for housing by closing corporate tax loopholes and restoring corporate taxes to a fair share not seen in decades past is an essential source of funding. Removing subsidies and opportunity zones that go to luxury hotel projects, businesses, and high end condos is a major source of tax avoidance that can help us make up for the lack of housing funding. Giving local governments fast-track/prioritization capabilities for affordable housing permitting versus luxury housing, additional flexibility for system development charges, and additional incentives for deeply affordable and affordable housing backed with state money are top priorities for Kate.

Between educating and advocating for justice in the criminal system, as well as serving shoulder to shoulder with the homelessness advocacy community Kate has had some setbacks in her own life. She is a stage III breast cancer survivor, having a double mastectomy and navigating the pre-Affordable Care Act healthcare system. She saw her life-saving cancer prescription go from $90 for 3 months to $3,000 overnight. All the while she spent ten years on an incredibly painful post-cancer hormone suppressing drug so she could survive to raise her kids, just 4 and 6 at the time. Kate is eager to keep pre-existing conditions away from the worries of everyday Oregonians in a unique rising from the ashes personal healthcare story that included chemotherapy and more than a decade battling her own body just to be here everyday. Her survival and strong health prognosis inspires her in her work as she remains committed to serving her community.

If elected, Kate is eager to dive into solving our healthcare challenges. She wants to utilize the power of her peers in the Senate to explore the potential of profit motive-based drug expiration dates and look into a 2nd life for drugs that are wasted but still effective. She is also ready to tackle ever-rising drug prices to help make healthcare more affordable. Linking her experience with the PSRB and the law, Kate knows that we must do a better job taking care of people and families who need mental health support and is ready to get to work when she arrives in Salem. Being a powerhouse of a prosecutor and teacher of much law in Oregon, could you imagine some tough questions Kate might have for drug makers? Passion, personal experience, and life-or-death decisions surrounding pharmaceuticals are some key motivators for change driven by Kate’s life experience.

The future of our planet is important to us all, and Kate is no exception. When talking about climate change, she is eager to point out the weighty impacts of past and current generations and how these affect not just her kids – but all young people – and future generations. Kate does not believe we have to sacrifice jobs in order to green our economy and save our fisheries, rivers, forests, and oceans for future generations to come.

Kate is eager to increase funding to restore and protect our natural resources, and protect the region’s Native American fishing heritage.

While the federal government is currently hostile towards the existence of climate change, California, Oregon, and Washington can harmonize laws and regulations to combine purchasing power, and counteract lowest common denominator federal environmental standards. Short term thinking has driven policy making in Oregon for far too long, and climate change is just one place where long-term policy objectives need to be put into place. It takes time to change things that have been seen as fundamental to society.

Clean air is increasingly scarce in several seasons now, from winter season air stagnation and summertime smog and forest fires. In recent years, Oregon’s wine industry lost large crops and millions in revenue due to air pollution. Oregon faces air quality that is akin to smoking cigarettes more days of the year than ever before. Enacting policies to enable emergency controls on pollution and everyday efforts to eliminate dirty diesel emissions, wood for heat combustion and unchecked agricultural burning are essential to everybody having clean air to breathe. Reductions in emissions are long overdue and the consequences of the fossil fuel era are shortening life spans and economic productivity already. A comprehensive climate plan is slated for the upcoming 2020 short session — Kate is a strong supporter and looking to learn more from experts moving forward.

Eager to approach her campaign differently, her campaign team includes eight female high school student interns from diverse backgrounds that offer perspective on policy, communicate with young people and voters, and support the campaign in a variety of ways.

Eager to make a brighter future with Oregon’s youth, Kate is hoping to redirect many of the attitudes that turn youth off of politics by not just including them, but empowering them. Kate and her team are committed to charting a new path in politics that lifts up, listens, and learns from the community – and it is this guiding philosophy that Kate will bring to Salem.

Endorsement Note: prior to the May 2020 Democratic party primary the Washington County Democratic Party does not endorse candidates in partisan elections. This article is provided for informational purposes and should not be read as an endorsement. Other candidates in this race have been contacted for similar coverage.