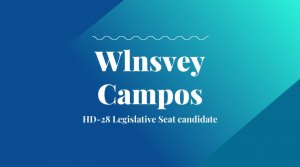 Wlnsvey (wins-vay) Campos announced her candidacy in August of 2019 for the open seat in House District 28 left by the retirement of long-time Democratic Representative Jeff Barker. Since then, she’s been hard at work on the campaign trail. She’s a long-time Oregonian with two Bachelor of Arts degrees from Pacific University, and a candidate with a sharp intellect and a passion for helping people that has shown up in all the threads of her life. All of the way back to childhood, Wlnsvey has been interested in social justice views, stemming from difficulties in her own childhood that set her college and political career in motion.

Since 2018, Wlnsvey has been one of three staff helping the most needy families among us by working as a case worker for Family Promise of Beaverton. It’s a non-profit that provides shelter for children and families experiencing homelessness. The vital program is a place where the most needy families are able to stay together. It is meant to be a safe place and is supported by a large group of volunteers so that the reach of donor money can be extended. Family Promise, a rotating location-based charity, provides overnight homeless services, case management and resources such as meals to children and families.

Wlnsvey knows first hand what it’s like to have insecure housing, as in her own childhood her family lived in temporary housing/motels due to financial difficulty up until she was able to go to college. She also sees the issues of insecure housing in those experiences of her clients.

Working hard is one element of how Wlnsvey has lifted herself out of poverty – through her determination in primary school and at Pacific University while working on both of her Bachelors Degrees. Using scholarships, grants, and hard work in college she was able to get a B.A. in Political Science and a B.A. in Philosophy with an emphasis in ethics, law and society. During school she helped other students by working in the Pacific-U Financial Aid office and tutoring elementary school students in Forest Grove. While pursuing two tough majors at Pacific, she still found time to volunteer on the state executive board for the Oregon College Democrats.  She also served as president of her local College Democrats chapter, and the college liaison to the Washington County Democrats.

After college, she had a very active career including working at organizations such as Our Oregon and the Oregon Nurses Association. She also attended the NEW Leadership Oregon program in 2017 and has since served on the Alumni Committee for NEW Leadership Oregon – a training program to facilitate our region’s next generation of female leaders. Wlnsvey is also an alumna of the Emerge Program that trains and uplifts women candidates. And she has served as a member and treasurer on the Next Up (formerly the Bus Project) Board of Directors.

She worked for Erika Lopez’s Hillsboro School Board campaign and served on the Washington County Democrats’ Executive board from 2015 until 2019 when her candidacy for office was announced. During her time within Washington County Democrats, she chaired the Latinx outreach committee and co-chaired the Young Democrats committee. She also served on a number of different special subcommittees.

When it comes to housing policy, Wlnsvey is passionate about taking action in a number of different ways, including seeking to pay everybody a living wage. Since the minimum wage has not kept up with the actual cost of living and cost of housing, many have become homeless or made significant trade-offs to stay indoors. She has always opposed any criminalization of homelessness and points out that it amplifies the problem of insecure housing to criminalize lack of housing — since it leads that person or family to have even more difficulty getting housing later.

No-cause evictions are a cornerstone of the problem and Wlnsvey, if elected, is eager to offer a bill to help eliminate the practice completely.

Many tax incentives for home ownership are flowing to those who do not need them, and those expenditures (tax breaks) are just a portion of the funding needed to resolve the homeless crisis. Wlnsvey is excited about using a position in the Oregon House to extend the public investment in housing affordability and supply. She would like to provide public investment to ensure that no Oregonian is homeless.

As for education, Wlnsvey believes that while the Student Success Act passed in the 2019 legislative session is a great step forward, it does not fix decades of neglect and disinvestment in the state’s education budgets. Due to years of funding reductions, the education workforce is underpaid, and many are taking on more roles and responsibilities beyond just academics.

She’s running to pay public servants what they deserve, and she believes educators should not have to pay out-of-pocket to have resources in their classroom. They should have the support staff they need, so that every child has the quality education they deserve.

Oregon needs a thriving, educated workforce in order to succeed. Wlnsvey is a champion for renewed investment in K-12, paid for by increasing taxes on the wealthiest Oregonians, and the largest corporations which currently contribute less to our tax system than everyday folks and mom and pop shops. She believes that in order to have a dynamic, innovative economy, we need to prioritize education, healthcare and affordable housing. These are the building blocks to compassionate and smart governance.

While reducing class sizes and hiring support staff are cornerstones of Wlnsvey’s education plan, she understands that’s only part of the solution. She knows Oregon students need to have avenues to a higher education that will not burden them with lifelong debt. She is committed to authoring legislation to make Oregon public universities tuition free, and create a robust debt forgiveness program for students who currently hold public debt. Wlnsvey will be a champion of policies that provide gateways to higher education and beyond for every student regardless of money, status, gender, race, or orientation.

Wlnsvey is eager to address the climate crisis and insists that all legislation and policy needs to be reviewed through a climate lens.

Climate change poses an existential threat to humanity that cannot wait until 2050.

We need to be bold and radically transform our economy to run on sustainable energy, not fossil fuels. She will be an advocate for an Oregon Green New Deal, which will invest hundreds of millions into clean energy, new infrastructure, and livable wage union jobs. Wlnsvey believes there is no middle ground when it comes to protecting our planet and the environment from the greed of the fossil fuel industry and climate skeptics.

Transportation in Washington County is a huge issue, especially in Aloha which has TV Highway running thru House District 28. She is eager to collaborate in addressing one of Oregon’s most dangerous highways – one that is not well-lit, lacks crosswalks and has many unsafe transit stops. Changes to transportation policy are needed – such as rapid bus transit and dedicated lanes to incentivize public transit and make it more competitive and on-par with car travel times. Such systems already exist in Eugene and could be introduced on TV Highway.

Wlnsvey is on the ballot with a portfolio of life, academic, and practical experience which makes her wise beyond her years. She is running for the Democratic nomination for House District 28 in May 2020. Her campaign website is https://www.camposfororegon.com/.

Endorsement Note: prior to the May 2020 Democratic party primary the Washington County Democratic Party does not endorse candidates. This article is provided for informational purposes and should not be read as an endorsement. Other candidates in this race have been contacted for similar coverage.