Skip to content
Allyship Tips – 2: Hold Yourself and Others Accountable

Allyship Tips – 2: Hold Yourself and Others Accountable 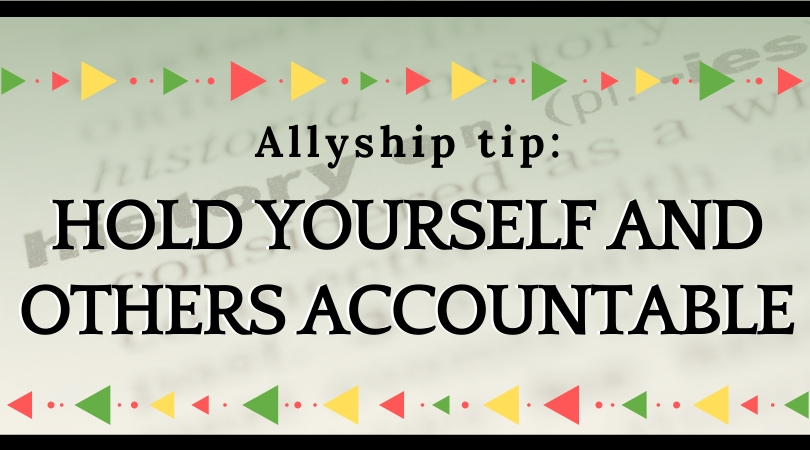 Hello. My name is Barry Johnson-Smith. I am a 24-year-old Black male who has recently moved to Hillsboro, Oregon from Lawrenceville, Georgia. I desire to be more involved with the Washington County Democratic Party. Part of my contribution to the WashCo Dems is writing a three-part series about allyship with a focus on being allies for Black people, especially in the local area. I recently posted Part 1 which discussed how potential allies should educate themselves before supporting the Black community. Today’s article, Part 2, discusses how allies can hold themselves and others accountable to their own racially charged unconscious bias and microaggressions.

Allyship is using your privilege identity to advocate for and support members of a marginalized community.

Being an ally for Black people is helping us address the issues that have plagued us by a society designed to oppress us. However, I do know people have apprehension about practicing allyship. Some people do know not how to be allies and are afraid if they try to help they might do more harm than good. I totally understand.

That is why I am creating this blog series of tips – to help well-intentioned people support the Oregon Black Community in an actionable way.

Tip 2: Hold Yourself and Others Accountable

For those of you who are currently reading this article, I would assume you believe yourself to not be racist or prejudice towards Black people. I truly hope you are well-meaning and consciously trying your best to not be offensive towards Black people. Unfortunately, American culture still spreads negative stereotypes and narratives about Black people that affects how we think, act, and engage with Black people without us realizing it. You can use social media to post about how unfair the criminal justice system is for Black people, yet still clutch your wallet when a Black man walks by you. You might support organizations for Black women, yet still, feel uncomfortable when your Black woman coworker speaks assertively. This class of stereotypes and prejudices is called unconscious bias and to be honest, everyone has them.

Even though I am Black, I realized I reacted with fear toward Black people who appeared homeless vs with a lack of fear toward their white counterparts. My unconscious bias results from the constant media images I receive disproportionately depicting crime conducted by Black people. Though unconscious bias is not our fault,  it is still our responsibility to be cognizant, productively address these biases, and change our conduct to minimize racially charged microaggressions.

Let’s break down “racially charged microaggressions.” By racially charged, I mean motivated by racial biases. Microaggressions are subtle, often unintentional insults and denigrating hidden messages. When I was an engineering student at Georgia Tech, a few white students often assumed I was a basketball player or that was only there because of affirmative action. These statements implied I was not smart enough to be at Georgia Tech and is frustrating to hear over and over again. I wanted to prove these white students wrong, so I worked extremely hard to be the best in my classes. However, I put a lot of stress on my psyche and body and I eventually burned out. I had to take a step back, and  I saw how I let those students negatively affect me.

Here’s a more politically influenced example. In counties across Oregon, Democratic Party members can utilize Robert Rules of Order (a common method to organize meetings) at meetings to inadvertently silence the voice of new Black members of the party because they did not follow the rules of the meeting. Since these spaces are filled with predominantly white people, this situation could trigger the Black Democratic members and they perceive the situation as a painful reminder to them of the lack of educational support and disenfranchisement in the political space due to race. These remarks psychologically wear down Black people and the consistent and constant experience can lead to the degradation of health.

To help address these microaggressions it is important to be mindful of the unconscious bias that you exhibit and receive on a daily basis.

An activity that can grow your self-awareness is to spend a week reflecting and journaling the racial biases and stereotypes that come through your mind. You may not observe certain biases immediately, and some won’t make sense without first-hand experience. Just allow yourself to be curious and be cognizant of those biases because you will not be able to address the problem if you cannot define and articulate that problem. Below, I have provided a  document that provides some examples of racial microaggressions that people commonly experience. Look over this document and reflect on which ones you commonly use. My hope is we can all be better at catching ourselves and minimizing our microaggressions.

Be open and receptive when someone confronts you about an offensive racial comment or action you did. You are not a terrible person because you made a racist or prejudiced remark. You were ignorant about the negative impact of the remark, and hopefully, are going to amend your behavior. Genuinely apologize and use the situation as a learning experience of how to improve. If the person is willing, ask them why your actions were offensive and how you should handle the situation next time. This intentionality shows you are truly a caring person who is considerate of a person’s feelings in the situation.

Besides dealing with your own microaggressions, there will be times where friends, colleagues, and family will act on their own microaggressions. As an ally, it is important for you to address others’ microaggressions and educate them about why their actions were harmful. I know some allies feel very uncomfortable when calling out other people’s racial microaggressions because they are afraid of conflict. Conversely,  there are some allies who have no problem calling someone out, but they might attack a person’s character instead of the behavior.

Regardless of where you stand in your Allyship journey here are tips to help you address racial microaggressions.

These tips come from the LGBTQIA Allyship guidebook, a guide to being a straight ally, written by the organization PFLAG (Parents Families and Friends of Lesbians and Gays) National and the tips are useful for handling any offensive remarks.

Make sure that you can practice these tips because it might be hard to use these tips in the heat of the moment.

Having the ability to confront others’ offensive remarks and racial microaggressions will make more inclusive and healthy environments for Black people.

Here are some links that describe more in detail about racial microaggression and unconscious bias and how to address them. Thanks for reading Part 2 of Allyship Tips. Look out in the near future for Part 3 where I discuss how allies can support organizations and projects that are addressing issues Black people are facing.

How Microaggressions Can Affect Wellbeing In The Workplace

How racism and microaggressions lead to worse health