Skip to content
Republicans Run from the Future… AGAIN

Republicans Run from the Future… AGAIN 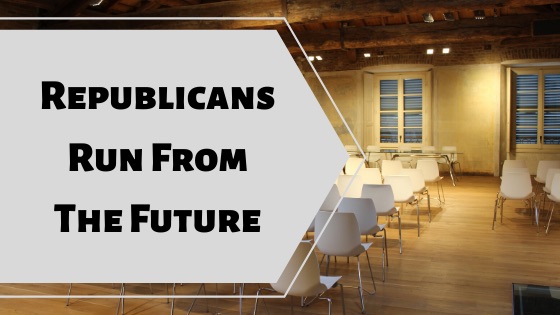 The bill is known as Legislative Concept 19, and it scares the hell out of the Republicans of Oregon’s legislature. It is 2020’s new take on last year’s Clean Energy Jobs Bill that sent GOP legislators running as far away as Alaska to prevent the bill from being voted on. Basically the new law would create a “cap and trade” system whereby polluters would be penalized for exceeding allowed carbon emissions and rewarded for lowering them. The new bill differs from the old only in being slightly more stringent cap on CO2 emissions.

Of course, this is a much more moderate approach than, say, the United Kingdom’s, which as of 2035 intends to ban all but electric vehicles nationwide. But moderate or no, any legislation to curb the world’s climate disaster is too much legislation for today’s Banana Republican Party. Naturally, the voters of Oregon largely support this kind of legislation, that’s why the Democrats hold a super majority in Salem. Therefore, the only way the GOP can block it is to do what they did last year and run like hell.

In Oregon, without a quorum of the legislators in the state capitol nothing can be voted on, period. Legislation proposals of all kinds from funding medical research to improving veteran services stall and die while the session’s clock ticks away, but that doesn’t bother our Republican friends. Nope, as long as the wealthy polluters remain wealthy polluters they are content, and the rest of the people of Oregon can go hang.

What can we do about this as average citizens? Not much today (unless you care to lure a Republican back into the capitol building with the promise of a free MAGA hat) But a lot tomorrow, my friends, a lot. November third is coming and with it a reckoning. Sixteen of Oregon’s thirty senate seats are on the line as well as all sixty representatives seats. Remember, the only reason these people have jobs is because enough people voted for them, or enough people didn’t vote against them. If they’ve forgotten that today, then we can make sure they remember it tomorrow.

Update – they have walked out.