Skip to content
Our Values: Science and Technology for Human Advancement

Our Values: Science and Technology for Human Advancement 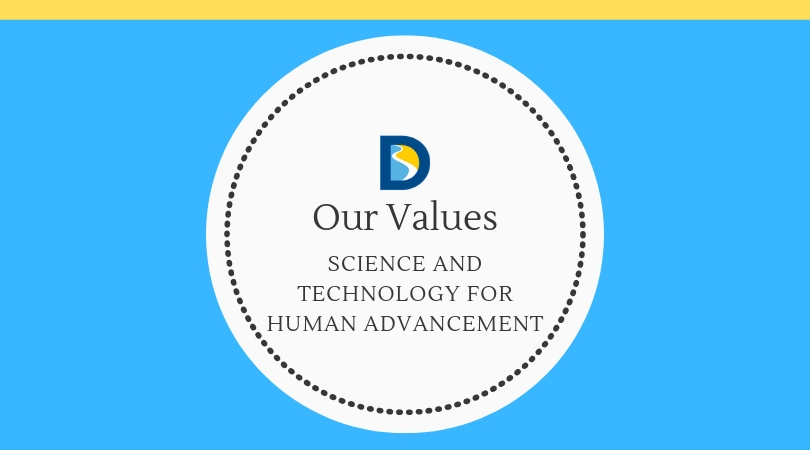 Sahara was doing one of her favorite things–looking at pictures of the stars. The pictures were taken a long time ago, in a place where she had never been.

Sahara’s other favorite thing to do was talking to her great-grandfather.

“Great-grandpa, tell me again what it was like back on Earth?”

“You never get tired of hearing about that, do you? The Earth was a beautiful place, with forests and oceans and fields. With tigers, polar bears, dolphins and whales…”

“But then we wrecked it and had to leave, right?”

“Sadly, we did. Our world turned into a place of crazy weather, dying animals and little bits of trash scattered everywhere. Really, we should have known way back when Donald Trump was elected President that anyone with brains should be looking for another planet…”

“I don’t want to hear about Donald again,” Sahara interrupted him with a scowl. “Tell me the happy part of the story.”

Her great-grandfather laughed. “Okay, okay, impatient one. The happy part of the story is that even during the darkest moments of the crisis the world was going through, there remained people who still believed in science. In human knowledge. And who believed that if we tried our best to use that knowledge for good, we could save ourselves. In my country of the United States, those people were mostly members of the Democratic Party, and the Party wrote a platform–or a list of ideas we believed in–stating that we would use science and technology to benefit everyone.”

“By going into space!” Sahara said, clutching her tablet with the star pictures on it.

“Well…no. Firstly and most importantly, we wanted to make things better on Earth.”

The little girl looked crestfallen. “But if you had to leave, doesn’t that mean you failed?”

“I know it may seem like that, but we didn’t. The principles of our platform in many ways are still with us today.” He leaned forward and smiled. “You will see it if you pay attention. For example, I’m alive today because the Democratic Party encouraged studying human genes–the building block of what we are. However, they did not allow companies to claim ownership of gene sequences, so that those companies wouldn’t be able to dictate what kind of research and testing could be done using the genes.”

“We also made sure that the computer networks used on Earth to transmit knowledge were affordable and available to all. We felt everyone should have a chance to find information and to learn. This was how we would grow as a species. And no matter who you were, you needed to be free to express your thoughts on the network. We had seen what could happen when dictators and the rich were able to control ­­information, and we never wanted to let that happen again.”

He slowly stood up and walked over to one of the large monitors in the room, showing an image of a machine busily tunneling through the side of a mountain. “There is one thing I’m particularly grateful for. Because of how amazing the technology that we developed was–like the robots that you see around here today–a lot of the jobs that people used to work back on Earth were lost. But the Democratic Party never forgot about the workers, and we had a plan for taking care of and retraining the humans whose work had been taken over by robots. One way to do that was teaching people how to work in science and technology, and it was the Democrats’ goal to have as many different kinds of people as possible educated and trained to do that.”

“And that, my dear great-granddaughter, is how your mother ended up working in this space colony, before you were born. Thank goodness, by then our country had learned to move beyond our old prejudices.”

He turned and met Sahara’s eyes. “There. Is that the happy story you wanted to hear?”

“I guess so.” She pondered. “Do you think we’ll ever be able to go back to Earth?”

“Possibly. There are people there now, working on repairing the damage we did and making it a more livable planet again. Maybe someday you’ll be one of them.”

Sahara bent her head over her tablet again, swiped at it and and stared hard at a picture of a night sky. Something in her expression made her great-grandfather come over, sit down next to her and put his arm around her.

“Never forget, Sahara, that the Earth was almost completely lost because the idea of money and personal profit became more important than anything else. And never forget that we were saved just in the nick of time because we remembered the idea of community and sharing our knowledge for the benefit of all.”

She rolled her eyes a little at that. “Okay, okay. Community, Democrats, yadda yadda. I will remember.”

“Good,” he said with a grin. “As long as we remember that we’re a community, no matter where we are in this great Universe, we’ve still got a chance.”

This is the ninth of ten articles the Comms team is writing on our 2018 What we Stand For (which maps 1-to-1 with the Articles of our 2018 Platform).  Facts and policies exist within the frame of morality, which is how the brain works.  Our challenge as Democrats is to state our progressive values better to our coworkers, neighbors, and family.  Our values are as American as apple pie, and the American flag means more than just supporting the troops or the status quo.  Our policies must be grounded in values and feeling and not just theory in order to connect to voters that may not yet be swayed to vote Democrat.  We must also understand the traditional conservative values of non-Dems (and Dems) better in order to improve our empathy and ability to connect (which is core to progressiveness).  This series of articles by our writers explores our values by offering some depth and context.