Our Values: Refuge and Sanctuary 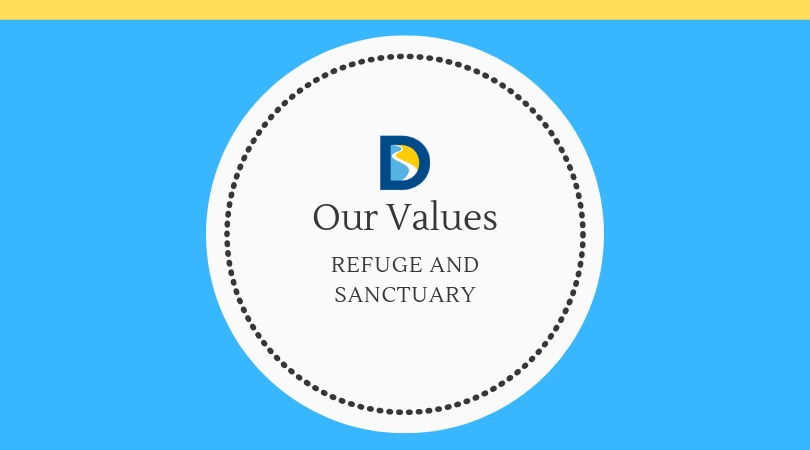 “Immigration policy should be generous; it should be fair; it should be flexible. With such a policy we can turn to the world, and to our own past, with clean hands and a clear conscience.” ― John F. Kennedy, A Nation of Immigrants

And President Kennedy knew what he was talking about, being himself the great-grandchild of immigrants. Kennedy was also well aware of the history of immigration in this country. He found it tragically ironic that a nation vastly made up of the decedents of immigrants and refugees also has a thunderous history of anti-immigrant hysteria and bigotry. 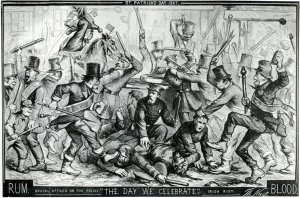 The cartoon herein is by Thomas Nast, the 19th century Republican and political cartoonist who famously christened the GOP with the elephant. In Nast’s work, Irish immigrants are drawn as bestial apes, gleefully rioting, and beating police officers. To be sure, Nast was no fan of the immigration wave of his time, but he was hardly alone. In the foreword to A Nation of Immigrants by John F. Kennedy, Congressman Joe Kennedy III recounts how his grandmother shared with him an old want ad from her youth advising of many jobs available but the ad also went on to specifically state, “No Irish need apply.”

Sadly, the prejudices faced by the Irish were nothing new in this nation even then. Even though a whole battalion of George Washington’s army was made entirely of German-speaking immigrants, not all of our founding fathers were exactly supportive. Specifically, of the Germans, Benjamin Franklin once said, “Those who come hither are generally of the most ignorant stupid sort of their own nation.”

Does any of this sound familiar?

Sadly, it does. To quote one of our more modern political figures speaking recently about immigrants, “They’re bringing drugs. They’re bringing crime. They’re rapists. And some, I assume, are good people.” Now, perhaps it’s a sign of our progress as a nation that Trump’s obvious bigotry was somewhat modified with that last bit about “some are good people.” Yet in all honesty, we can and should do much better than that—but unfortunately, these days we’re just not.

Today, more than any other time in modern memory, immigrants are under assault, not only by the occasional employer who merrily wishes they not apply, but by the Federal Government itself. And it’s not just the undocumented refugees that are taking the heat. Although putdowns directed at the undocumented make for the biggest applause lines at Trump rallies, legal immigrants are also under fire. Of note; the people who risked their lives for Americans in Iraq and Afghanistan as translators are increasingly finding it harder to immigrate to the US even when their lives are in danger from terrorists in their home countries. Not only is such a policy a national disgrace, but it greatly reduces the incentives for locals to help American soldiers overseas—thus putting our troops’ lives at even greater risk.

What’s the reason for this Republican anti-immigrant strategy? Well, study after study concludes that new American citizens tend to vote Democratic and the GOP doesn’t like that very much. You see, after Mitt Romney’s defeat in 2012, the GOP performed an “autopsy” to determine why they lost. The report clearly stated that the GOP needed to reach out to immigrants to win future elections. However, the modern party of Lincoln decided to ignore their own findings and go in the opposite direction. Apparently, today’s GOP seems to feel it’s easier to deport ‘em than to recruit ‘em. This appeals to the xenophobic base of their party, and that’s apparently just fine with their leadership too.

Naturally, the Democratic Party stands firmly against this trend. We see the GOP’s strategy as the bigoted power grab it is and stand ready to resist it. Also, we understand American history and value the role that immigrants have played in it. From the German immigrants who fought and died in our Revolutionary War to the Chinese and Irish immigrants who built the transcontinental railroad, new Americans have proven time and again that they have the power to make our nation greater. This is why Democrats are pushing for reforms that will make the immigration process safer and more humane. We believe that the children of immigrants, whether documented or not, belong with their families, not in cages. And we welcome any immigrant who’s willing to roll up his or her sleeves and do the work America needs doing.

It’s a sad truth that American’s immigration history has often been fraught with cruelty, but that is not our only story. Americans have also stood up for the rights of refugees, and even welcomed the foreigner to our shores on many a proud occasion. As the lady in the harbor proclaims, “…From her beacon-hand glows world-wide welcome; her mild eyes command the air-bridged harbor that twin cities frame. “Keep, ancient lands, your storied pomp!” cries she with silent lips. “Give me your tired, your poor, your huddled masses yearning to breathe free, the wretched refuse of your teeming shore. Send these, the homeless, tempest-tost to me; I lift my lamp beside the golden door!”  This is also American heritage, and we embrace it as the better angels of our national nature. And as Oregonians, we especially demand a double helping of it.

Because Oregon is a mosaic of different cultures, we value the social and cultural benefits from our immigrant groups. We reject scare tactics and disparaging racial rhetoric and believe that bigotry has no place in America today. The basic truth is that all men (as in all mankind) are created equal. Under the Constitution, all residents of this country enjoy civil rights, and we will defend them as Americans should.

This is the seventh of ten articles the Comms team is writing on our 2018 What we Stand For (which maps 1-to-1 with the Articles of our 2018 Platform).  Facts and policies exist within the frame of morality, which is how the brain works.  Our challenge as Democrats is to state our progressive values better to our coworkers, neighbors, and family.  Our values are as American as apple pie, and the American flag means more than just supporting the troops or the status quo.  Our policies must be grounded in values and feeling and not just theory in order to connect to voters that may not yet be swayed to vote Democrat.  We must also understand the traditional conservative values of non-Dems (and Dems) better in order to improve our empathy and ability to connect (which is core to progressiveness).  This series of articles by our writers explores our values by offering some depth and context.