What is the State Central Committee? 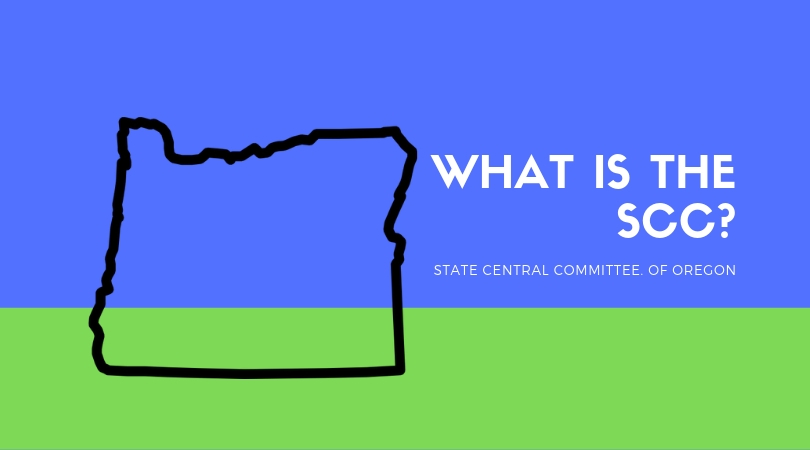 The SCC is the State Central Committee. The SCC is the governing authority of the Democratic Party of Oregon (DPO), which means the SCC runs the DPO (the Democratic Party of Oregon). Since the DPO is a political party organization it does not have any formal power over elected Democrats. But, the SCC has the power to vote for resolutions urging elected officials to introduce legislation, vote a certain way, or lobby others on issues the SCC deems important. The SCC operates much like our county Central Committee (CC), with a general membership assembly, standing committees, and officers. Each county elects delegates to represent it at the SCC based on their population. Those delegates simply must be registered Democrats in the county for which they are running.

Washington County currently receives 11 delegates to the SCC, and the chair is an automatic delegate. We also elect 11 alternates to fill in when there are absences and vacancies. All of our SCC delegates and alternates are “at large”, meaning they serve all of Washington County rather than being elected to represent districts. Our delegates are all volunteers, no one is paid. But the DPO does offer travel grants that delegates can apply for to ensure the cost of traveling across does not prohibit participation. Our delegates select a Delegation Chair who is responsible for tracking delegate attendance to each meeting and reporting the business of the SCC to the CC. If a delegate misses two meetings without notice or misses three meetings total, they may be removed from the delegation. The CC can direct the delegates to vote a certain way on motion, though failure to comply does not result in a delegate’s automatic removal from the delegation.

The SCC elects its officers and a representative body, like our Eboard, that is called the Executive Committee (EC). The EC is not permitted to act on behalf of the SCC unless the SCC has specifically delegated the duties to the EC, or in the event of an emergency (which would be an unforeseen circumstance requiring an immediate response). The EC comprises the party officers, standing committee chairs, representatives elected from three regions of the state, chairs of special group caucuses, representatives from each Congressional District, and any elected Democrat to Congress, statewide office, or state legislature. Though elected Democrats are members of the Executive Committee, most do not show up for the SCC meetings, or even most Executive Committee meetings.

The purpose of the DPO, as stated in the bylaws is to:

● Elect Democratic candidates;
● Coordinate, encourage, and assist in organizing county Democratic parties;
● Adopt a Party Platform and work to ensure its enactment into law;
● Represent the DPO with the Democratic National Committee (DNC) and with Democrats in other states;
● Promote the interests of the Democratic Party in the State of Oregon consistent with the wide diversity of our state

The SCC, like our county party, considers business at quarterly meetings which move from county to county and are usually held on a Sunday afternoon. The meetings are open to public attendance, but only SCC delegates and associate members may speak on the floor. Regular meetings will have reports from the Chair, Treasurer, Standing Committee Chairs, and Caucus Representatives. Sometimes those reports will include actionable business, such as passing resolutions or a budget. Resolutions can vary for where the impact is made, from requesting something of our congressional delegation or state legislators. The SCC also votes to endorse or oppose statewide ballot measures and to open the primaries.

As previously mentioned, to run as an SCC delegate one must only be a registered Democrat in the county they seek to be elected from. It is possible to be a delegate to both the SCC and Congressional District Committee, and, also a delegate to the Democratic National Convention (where the party nominates the contender for President) …all at the same time, provided there are enough hours in the day to all three.

If being part of the SCC interests you the meetings can always be attended by guests. There are also vacancies in alternate positions that open up throughout the course of the two-year terms that may be of interest. Attending a few SCC meetings as a guest or alternate is a good way to dip your toe in the water without having to carry the full responsibility of a delegate and see if it is something you wish to do when the next reorganization meetings happen.

Learn more about the SCC meeting

Learn about the party, the officers, our platform and Legislative Action Items, bylaws and standing rules

For information about the WashCo SCC Delegation email the Delegation Chair at: scc@washcodems.org