Skip to content
Our Values: Health Care for All

Our Values: Health Care for All 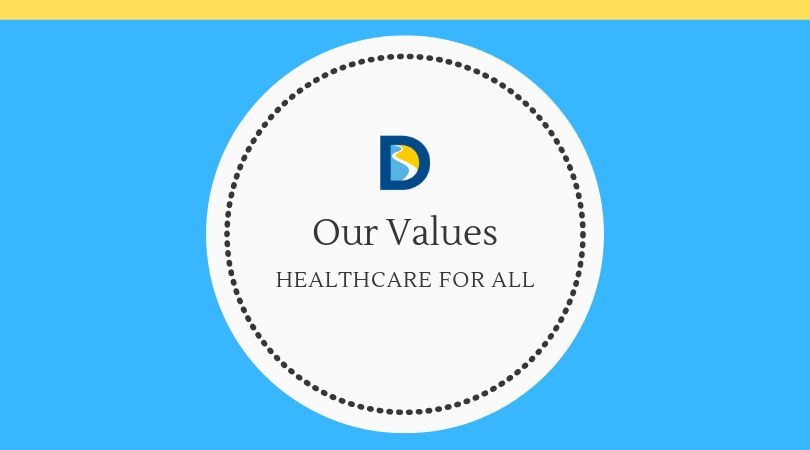 Only recently, largely due to the efforts of people like Bernie Sanders, have Americans begun to seriously think about the fact that there is something wrong here. And the fact that the cost of health care, whether people are insured or not, has been rapidly rising is encouraging people to listen. According to a June 9, 2019 report by the Kaiser Family Foundation, a recent survey has shown that one third of insured adults feel that is very or somewhat difficult to pay their deductibles, and one fourth say that is difficult to pay routine costs of health insurance such as premiums and deductibles. About one fourth of these insured adults say the copays for prescriptions are hard to afford and 3 in 10 say they have not taken always taken their medication as they needed to within the past year due to cost.

Just think, people are paying for insurance that they can’t even afford to use!

And the Gallup National Health and Well-Being Index reported that by the end of 2018, 13.7 percent of adults in the US were uninsured. Since the fall of 2016, there has been an upward trend in the rate of uninsured Americans, with woman, young adults, and lower income people the most adversely affected. Taking a look at the erosion of the Affordable Care Act (ACA) under the present administration and the increasing costs of health insurance, sadly this is no surprise.

A single payer health care system is just that. One payer. One entity does the job of paying for your care. But you get to choose your care providers, you get care when you need it (saving everyone money because you don’t let things get worse), and you do not have to worry about paying the bills. Yes, your taxes will probably go up. But when you think of all that you will save in premiums (most people getting insurance through employment have some deduction come out of their checks for premiums), deductibles, and copays, you still come out way ahead.

There have been efforts in Congress for years, in the form of John Conyers’ HR 676, to introduce a single payer system into this country on a national level. But with Bernie Sanders’ candidacy, single payer, or improved Medicare for All, is now becoming a household phrase.

The Washington County Democrats and the Democratic Party of Oregon understand the urgency of our health care crisis. The state party’s number one legislative priority item, recognizing that health care is a human right, is to work towards a comprehensive, publicly funded health care system, on the state and national level. Another statistic you should know: According to the Oregon Health Authority, 6% of Oregonians are uninsured. That’s about 245,000 Oregonians.

As Washington County Democrats there are so many ways to get involved and swell the ranks of people who will no longer tolerate the greed of insurance companies making a profit off health care.

Oregon is one of many states trying to get a single payer system. SB 770 is a bill that would establish a task force on Universal Health Care that would recommend a plan for a health care system in the state that would provide “publicly funded, equitable, affordable, comprehensive and high quality health care to all Oregon residents”. If it doesn’t get voted on this session thanks to the runaway senators, insist it get brought back during the special session that we know will be called.

We need to get to work at the grassroots level too. If your local entity (city council) has not passed a resolution declaring health care is a human right and supporting a publicly funded health care system to provide comprehensive, high quality health care for all, get that ball rolling. An effort is getting underway to introduce such a resolution to our county commission, and we will need everyone to call, email, and visit their commissioners.

Health Care is Human Right. Let’s get to work putting that value into action.

This is the third of ten articles the Comms team is writing on our 2018 What we Stand For (which maps 1-to-1 with the Articles of our 2018 Platform).  Facts and policies exist within the frame of morality, which is how the brain works.  Our challenge as Democrats is to state our progressive values better to our coworkers, neighbors, and family.  Our values are as American as apple pie, and the American flag means more than just supporting the troops or the status quo.  Our policies must be grounded in values and feeling and not just theory in order to connect to voters that may not yet be swayed to vote Democrat.  We must also understand the traditional conservative values of non-Dems (and Dems) better in order to improve our empathy and ability to connect (which is core to progressiveness).  This series of articles by our writers explores our values by offering some depth and context.