Skip to content
Our Values: Economic Justice and Stability

Our Values: Economic Justice and Stability 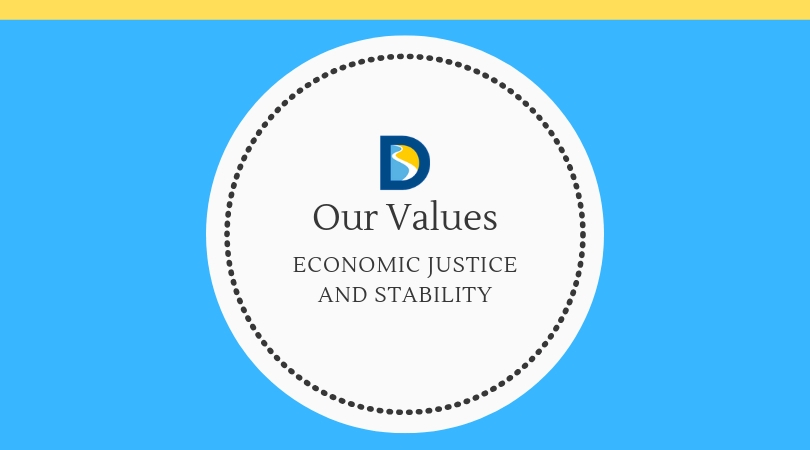 What do we mean when we say the Washington County Democrats support economic justice and stability? Why is business and economy related to values at all?

How we run our economy and distribute wealth can be done in different ways. What the right way to do that is comes from what our values are. We believe that everyone should have opportunity and a base level of economic security, not unduly disadvantaged at the start of adult life, not unable to get ahead no matter how hard one works, and not beleaguered by unnecessary hospital bills or student debt.

This was not on our country’s founders’ radar at all, but neither was ending slavery or giving women the right to vote or dominating the world. At that time it was *your fault* if you got sick and died, lost your fingers as a kid in a factory, were lynched by a white mob, fired for being gay, the list goes on. In other words, it was good to be a rich white male! Nobody could take your money away and you could do whatever you pleased with it, and then with the Industrial Revolution, machines allowed hoarding money even faster. America was literally founded not for life, liberty and the pursuit of happiness for all, but for whoever had the money, which was not most people.

It got extremely bad for ordinary folks about 100 years ago, not just in America but in the whole Western world.

Economic inequality and conditions for all the people that had moved to the cities from farms was pressurizing colonial powers that were fighting each other. Still, the government had little responsibility for their citizens – it was your fault.

The Great Depression was when something audibly popped. Some countries went full-dictator in response. America manned up and introduced some prudent social measures to keep things stable. Who knows what would have happened had England not chosen to stay and fight Hitler, relying on making us rich to survive. Between winning the World Wars and then the new global American domination, a great American middle-class burgeoned forth. The social measures of partially redistributing privately-hoarded wealth to the public through legislation such as the estate tax and a very high tax rate on the highest income amounts were stabilizing and created the educational system that allowed us to make the innovations to keep our economy humming. Even the Republican president Eisenhower knew he didn’t want to go through two World Wars again.

Between redistribution and rising competition throughout the world, big American companies were not seeing the profit margins they were used to.

They regrouped and figured out new ways to control their situation. First, through lobbying, as businesses realized they would do better to join together than lobby independently. Further, legislators had to rely more and more on lobbyists to handle the bigger role government now played – a market developed for access to legislators, and business groups were only happy to compete in that market. Lobbying led to the next tactic: changing election finance laws with SCOTUS picks that then blew things wide open with some late 00’s cases that essentially made it legal to buy elections through mass-media campaigns and unlimited funding. Third, and perhaps most important,  was voter maintenance. From Teddy Roosevelt’s public tours and photo op’s to FDR’s fireside chats to JFK looking youthful opposite a sweating old Nixon on televised debates, politicians have always played the media game the best they could to look good to voters, but the GOP’s Fox News was a quantum leap. 24-hour propaganda pumped out in a reality vacuum. An Eisenhower today could never be elected after being tossed around by Sean Hannity, D-day or not.  Business also funded think tanks to develop messaging, just as they could for selling products and services.  Dems just kind of stood and watched, perhaps relying on momentum from the prior 40 years, while losing district after district after district from 1980 until 2016.

Between elections and lobbying and superior messaging, sway over the government meant favorable political results for businesses.

As manufacturing jobs disappeared, Reagan attacked unions and their political power waned. New Democrats like Bill Clinton and the GOP supported racist social policies and unregulated business.  All increase in profits since about 1980 have gone to the rich, while wages for average workers has remained about the same. The bad thing about income inequality is that it leads to the worse situation – wealth inequality. It is capital (investments, home ownership, auto ownership) that grows wealth easily, not income, since assets themselves work for you like employees (you can rent a house out, or use your car to get a better job). The most wealthy enjoy a 5% annual return on their wealth, world-wide. Even average stockholders (the 50-90th percentile of wealth) can expect about 2% annually in the 21st century stock market, which is a historical average over the last several centuries in the Western world. But that 3% difference in earnings, compounded annually, means the middle-class will continue to disappear and the distance between the top 1% or 10% over everyone else will grow exponentially.

The devastating effect on the American dream, on the prospects of our children and neighbors, on the ordinary folks in the bottom 50%, evident in our mounting debt and spinning of wheels with high rents and wages that don’t keep up is chilling.  Inequality is in fact now as bad as it was 100 years ago when it became untenable for democracy to hold together.  Is it any wonder world’s worst businessman and pathological liar Trump can galvanize masses of people with cries of a rigged game?

The system must be fixed.

While what is to be done can be debated, we Democrats already support certain policies. We support a hefty minimum wage increase across the board (it could be more hefty). We support the right to unionize. We believe in a progressive tax structure. We believe large corporations should be held accountable to the community that supports them.  But most of all, we believe the private depends on the public. A broke government (currently almost all wealth in the US is owned not by the government but by private entities) is unable to serve its citizens and small businesses properly, and big corporations will always do what they can to make the most money for themselves and themselves only (with no responsibility to community or employee) unless prodded. And for campaign finance legislation, that takes more Dems in Congress so we can get a more progressive SCOTUS and some strong campaign finance laws.

Perhaps our greatest obstacle politically however is not big business but our own reluctance to change.

Businesses change tactics when failing, why shouldn’t a party? Should we consider seriously funding think-tanks to generate the messages we need to get our values across successfully, just as the GOP started doing 50 years ago? Can we reach out to constituencies abandoned by the Democratic messaging and claimed in bad faith by the rich for their votes? Can we shake our elitist tones? Can we stop playing into the hands of a genius salesman? Hardest of all, can we play the game set up to require private money to win elections without actually using the private money of those that want the game to continue like that? Small-dollar donations mean something to the public and many Dems are using that strategy which means fewer promises to keep to corporate donors.

Trump is a dictator, dangerous yes, but just a below-average bungling one, committing crimes in broad daylight since he is compromised.  He is so incompetent he lost more money than any other American over the period of a decade. What does it say about *us* if his marketing strategy against Democrats strikes a chord among a huge percentage of Americans (both Republican voters and former Dem voters)?

It comes down to values.

We aren’t going to convince anyone to follow us by suggesting rerouting some funds from this bucket to this bucket and calling it genius, or giving money away like some Ellen show without a way to make big corporations pay for it. We convince people by walking the walk and talking the talk.

We can start by talking values-first:  knowing what they are and how to express them. This article might not be perfect but it might give you some ideas or a new tool in your toolkit. Even I have not started talking politics with my neighbors outside of canvassing (too sensitive) but I am talking about issues more, getting informed not only about our values but on conservative values. It’s ok to not have all the same values as your neighbors – they aren’t Facebook.

Also, it’s volunteering with WashCo Dem committees and figuring out how to change things for the better and make impressions (good ones!) on the community. Standing for something by literally standing in front of people. If you have ever been to church or synagogue or mosque, you know values without action means nothing. Treat our county as a lab in which to experiment. That’s how all great innovations start.  If you have a skill, contribute it, or develop ones you never had a chance to.

Our county can show the state and national level Dem organizations that we believe all Americans get an opportunity to get ahead, not just some.

This is the second of ten articles the Comms team is writing on our 2018 What we Stand For (which maps 1-to-1 with the Articles of our 2018 Platform).  Facts and policies exist within the frame of morality, which is how the brain works.  Our challenge as Democrats is to state our progressive values better to our coworkers, neighbors, and family.  Our values are as American as apple pie, and the American flag means more than just supporting the troops or the status quo.  Our policies must be grounded in values and feeling and not just theory in order to connect to voters that may not yet be swayed to vote Democrat.  We must also understand the traditional conservative values of non-Dems (and Dems) better in order to improve our empathy and ability to connect (which is core to progressiveness).  This series of articles by our writers explores our values by offering some depth and context.