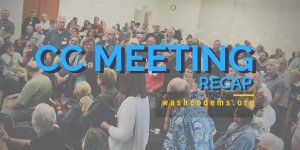 This is an informal recap of the meeting by an individual member. The official record is contained in the minutes taken by the Secretary, which can be found here.