Skip to content
WashCo Dems Op-Ed: The Reality We Face 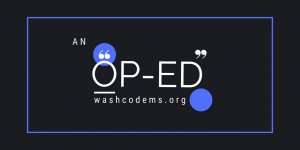 Living in the first quarter of the twenty-first century, today’s Americans are faced with numerous seemingly insoluble problems.  I invite you to make your own list.

My list would include two underlying problematic realities that have haunted this country for much of its existence:  white supremacy and anti-intellectualism.

The two might share some connections, especially in people’s inability or unwillingness to examine their implications and effects on the lives of all of us.

The current administration combines and exhibits them on a daily basis. The occupant of the White House is virtually a xenophobe, attacking those aspects of the modern world that befuddle him, especially when it involves refugees, immigrants, and people of different ethnic backgrounds on the one hand and on the other the role of scientists and scientific knowledge in the process of providing the empirical data used in creating a variety of policies that serve the American people.

Historian Ibram X. Kendi makes the crucial point:  “To disconnect science from belief, environmentalists and anti-racists must disconnect the disbelievers from the power to make racial and climate policy. When disbelievers take power, they will always believe in the business of reproducing disbelief. Environmentalists and anti-racists must be in the business of reproducing humanity.”

He does not go into detail about ways of disconnecting the disbelievers from the political process.  One obvious way is through the ballot box.

We would be very alarmed if a flat earther were to be put in charge of the National Transportation Safety Board or the Federal Aviation Administration, or even elevated to the presidency.

Holding such a belief privately is one thing; being in charge of the agencies that are tasked with overseeing the nation’s aviation safety is an entirely different matter.

Nevertheless, we see such outrages on a regular basis in the current administration.  Time and time again the foxes are assigned to the very chicken coops that they have targeted for years—from the outside.  We have a president who rejects well-established scientific consensus regarding climate change, a man who promises to edit the next National Climate Assessment (produced by scientists in thirteen different Federal agencies) to his ignorant, disbelieving satisfaction.

The other obvious way to stem the tide of stupidity is through education—not just K-12 education, but continuing education for all Americans.  After all, they all stand to suffer from poorly researched policies…whether it’s with regard to vaccinations, climate change, work-place safety, food safety, man-made environmental disasters, or consumer protections, to name a few universally shared concerns.

We also need to educate people about the interconnectedness of humanity, and how diversity helps lead to a more just society.

The research on this is very clear.  Appreciation of and support for a multi-cultural, multi-ethnic society results in a population that recognizes the humanity of the other, while a monoculture (or one that privileges one group over all others) lags behind when it comes to racial justice.  This project also entails coming to grips firmly and honestly with the history and implications of hundreds of years of white supremacy.  This will not be an easy task, but it must be undertaken.  We cannot continue to ride the current racist cultural trajectory.

It is the task of Democrats everywhere to be fully involved in producing the disconnect spoken of by Professor Kendi.  The task is to make it absolutely clear to the electorate what is obviously at stake.  Make people see that their own precious self-interests are at stake, at risk.  The Republicans provide plenty of very useful fodder, whether it involves social policies that are race-based or sneering rejections of the best scientific minds on the planet.  Use it against them, educate the people, get them to the ballot box, and make a better world.