Skip to content
Why State and Local Government Matter 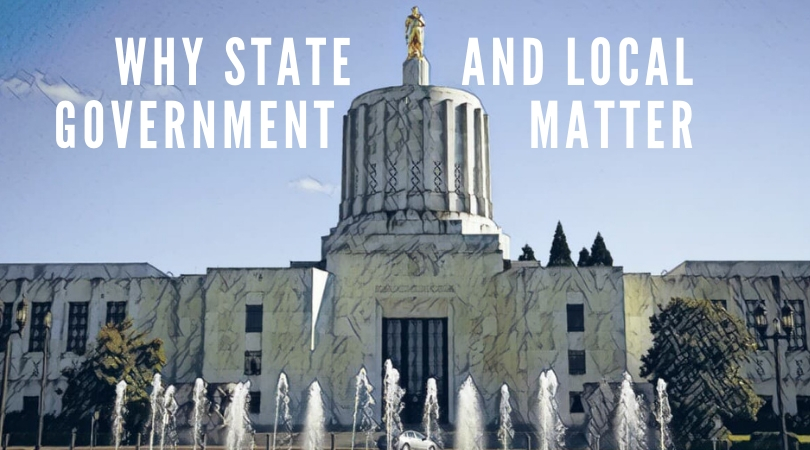 Why State and Local Government Matter

Our Democratic-led state legislature has already done a lot to mitigate the effects of some of the nastier policy changes at the federal level. Did you know that Oregon, along with 15 other states, has pledged to uphold the U.S. commitments to the Paris Agreement, even though the president has pledged to withdraw the U.S.? Called the United States Climate Alliance, this coalition includes some of the largest population states. California’s economy alone is the 5th largest in the world. By banding together, states can make a difference in slowing climate change, even without the participation of the country as a whole. Local support of our governor’s office is critical to ensuring Oregon’s continuing participation in the alliance.

One of the hallmarks of the Trump administration has been its attack on civil rights. It started with the Muslim travel ban, and was quickly followed by the rescinding of Title IX protections for transgender students, Department of Justice refusals to fight discriminatory voting laws, the withdrawal of protections for students with disabilities, efforts to review and block policies that ensure accountable policing practices, and more. Most recently, the administration announced a plan to redefine gender promises to have negative impacts on the lives of transgender citizens in a myriad of ways. Read a lengthy and appalling compilation of civil rights rollbacks here. States can do a lot to protect citizens in the face of openly hostile civil rights policies at the federal level. Oregon’s election laws are among the most progressive in the nation, and our LGBT citizens enjoy exactly the same rights as heterosexuals. It is critical that we keep Democrats in office at all levels of government if we hope to continue to protect the civil rights of all Oregonians.

With the appointment of Judge Brett Kavanaugh to the U.S. Supreme Court, many Americans fear that it’s only a matter of time before Roe v. Wade falls. Given his record and the makeup of the rest of the court, this is a legitimate fear. Did you know that if SCOTUS overturns Roe v. Wade, state laws will determine a woman’s right to choose? Even without Roe, Oregon law currently protects women’s access to safe and legal abortion.  If Roe v. Wade is overturned, the health and rights of women in Oregon depend on on-going local support of our governor’s office.

Republicans will continue to do everything they can to diminish the Affordable Care Act “Obamacare.” Despite this, states write the rules insurers have to follow in their state. There’s nothing stopping Oregon from telling insurers they have to insure people with pre-existing conditions. Oregon could also pass its own insurance mandate, which is critical to keeping costs down.  According to the nonpartisan Commonwealth Fund, if the ACA were repealed, and Oregon didn’t step in to keep our state’s system robust, over half a million Oregonians stand to lose health insurance, and 25,000 jobs will disappear. Democrats in state offices are the key to ensure Oregonians retain access to quality health care.

The cost of higher education continues to skyrocket, and the president and Republicans in Congress have made it clear they don’t plan to do anything about it. Oregon has already done something about it: in 2015, our state legislature passed the Oregon Promise grant program. It provides grants to any student graduating from high school in Oregon with a GPA of 2.0 or higher to offset the cost of community college tuition. With our state’s current budget crunch, Democrats to state office will continue to prioritize education.

When the Federal Communications Commission ended its policy of net neutrality, internet providers were no longer required to treat all internet traffic equally. They can slow down traffic to sites they don’t like and create paid “fast lanes” for services that rely on the internet. Oregon was the second state in the country to respond by creating our own net neutrality law. As in so many other areas of policy and law, states have the right to impose their own regulations on how things get done inside their borders. Oregon decided to maintain free and fair access to the internet for all Oregonians was important, and now any internet provider in our state is required to observe our net neutrality law.

The Trump administration’s hostility toward immigrants and refugees is unprecedented. Cries to “build the wall” started in the very early days of the campaign, and since then, his Homeland Security Department has drastically increased efforts to detain and deport immigrants. He has failed to protect Dreamers, and the images of children in cages will haunt all of us for a long time to come. A Democratic state government can provide protections to immigrants and refugees within our borders. State and local authorities are not required to enforce federal immigration laws, and leadership from the top within our state provides guidance on how state and local law enforcement should treat these vulnerable populations.

While this is mentioned last, it’s perhaps one of the most important issues that make having state-level Democrats in office so important. In 2020, the United States will conduct a census. Starting in 2021, we will begin a process that will either return fairness to our elections or continue to give Republicans an unfair advantage for the next decade. Redistricting is the process of drawing the lines for election districts. In our state, the legislature does this. In many states, Republican state legislatures have used political gerrymandering to gain an unfair advantage. Gerrymandering is the process of diluting the voters of a particular political party so that they are too weak to elect representatives. This is confusing, and the Washington Post offers a great graphic that explains it. Basically, Republican gerrymandering is how we got to where we are today. It’s why we have had more Republicans in Congress, even though Democrats received more raw votes. If we lose Democratic leadership in Oregon over the next two years, you can be sure that Republicans will gerrymander our maps too. Our governor will make a difference since the governor can veto the legislature’s redistricting plan.

This is why we have to remind our friends and neighbors that all elections matter- nationwide, state and local. We can make the biggest differences in our communities by ensuring we elect progressive-minded individuals at every level of government.