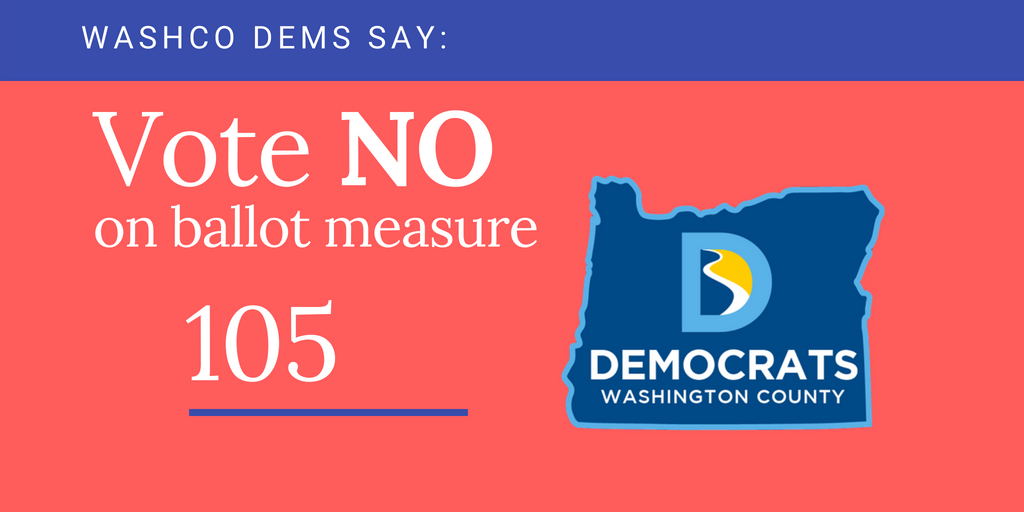 VOTE NO ON MEASURE 105: Repeals law limiting the use of state/local law enforcement resources to enforce federal immigration laws

This one is a little confusing! A “yes” vote on Measure 105 means you want to get rid of Oregon’s 30 year-old sanctuary law. Since 1987, Oregon has prohibited state and local law enforcement agencies from using public resources to enforce federal immigration laws. If Measure 105 passes, it will once again be legal under Oregon law for state and local law enforcement agencies to use public funds to investigate whether a person is a citizen and to otherwise enforce federal immigration laws. OPB offers a great in-depth story on how Oregon’s “sanctuary law” came to be if you’d like to learn more.

Three Republican state legislators, Representatives Greg Barreto, Sal Esquivel and Mike Nearman, are the sponsors of Measure 105. The group tried to put a similar measure on the ballot in 2016, but ran into trouble with the measure’s title, and it ultimately failed to reach the ballot. They tried again with a bill in the 2018 legislative session. The organization supporting Measure 105 is called Stop Oregon Sanctuaries. Eighteen Oregon sheriffs (not including Washington County Sheriff Pat Garrett) have endorsed the measure.

A group called Oregonians United Against Profiling opposes Measure 105. They are a coalition of many local businesses, law enforcement officials, prosecutors, and organizations. Their membership list is worth a look – it’s a long and diverse list and includes many Washington County concerns, including our district attorney and sheriff, major employers Nike and Columbia Sportswear, and civil rights organizations such as the ACLU.

The “yes” side (remember, they favor getting rid of Oregon’s sanctuary law) has raised about $21,000, all but $500 of it from inside Oregon. The “no” side, which favors maintaining Oregon’s sanctuary law, includes Defend Oregon (read about them above under Measure 102) and Oregonians United Against Profiling, which has raised almost $378,000. A little less than half that total has come from out-of-state groups, most of it from the American Civil Liberties Union and the National Immigration Law Center. A second group, Oregonians for Sanctuary, has yet to raise any funds.