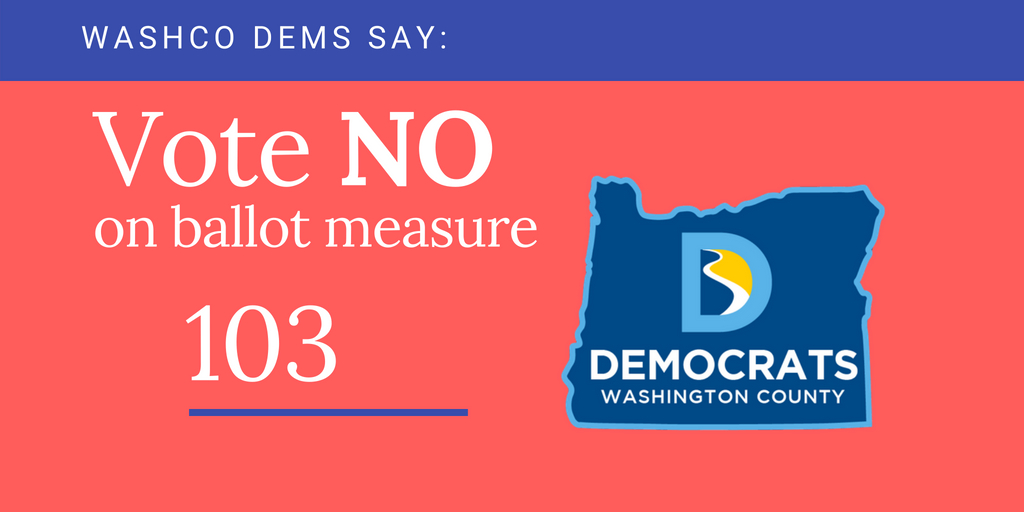 VOTE NO ON MEASURE 103: Amends Constitution: Prohibits taxes/fees based on transactions for “groceries” (defined) enacted or amended after September 2017

Measure 103 doesn’t change any current state laws. Rather, it makes sure Oregon will never have any new taxes on groceries in the future. Measure 103 is a response to 2016’s Measure 97. That measure, which failed to pass, would have imposed new taxes in Oregon, including a sales tax on groceries. Grocery stores want to pass Measure 103 to make sure there’s no chance of a measure like 2016’s 97 passing in the future.

Measure 103 has two chief petitioners: Ron Brake and Syd Hannigan. Ron Brake owns two grocery stores, as well as a wholesale company that sells products to many grocery stores and retailers in Oregon. Syd Hannigan was an executive with Safeway and is now retired. Both chief petitioners are also members of the Oregon Food Bank’s board of directors. They say that a tax on groceries would most impact seniors, low-income households, and military families, and must be permanently banned. Visit Vote Yes on Measure 103 to learn more about why they support this idea.

Measure 103 is opposed by a coalition called No on 103. More than 80 organizations and 50 businesses have signed on. They argue that it’s a mistake to put a permanent ban on a non-existent tax into the state constitution (where it would be very difficult to change or remove) and that the measure contains vague language that could have unintended consequences. For example, as called out in Willamette Week, the ban would block sugary drink taxes, therefore blocking soda taxes.

It would include sodas and other sugary drinks that are now being taxed in Seattle, Oakland and many other cities and have been the subject of a long-planned but never-executed Multnomah County tax.

The measure would also freeze in place the state’s corporate minimum tax, a provision that adds to progressives’ hostility to it.

Mary King, a retired Portland State University economics professor who’s looked at the measure, said it’s “a massive, unprecedented carve-out for some of the biggest retailers in the world that will apply to far more than just the food they sell.”

The yes side has raised $456,000 in campaign funds, $200,000 of it from Albertsons Safeway, an out-of-state corporation. Defend Oregon opposes Measure 103; read more about them in the Measure 102 section. A second group called Vote No on 103 that has the same leadership as Defend Oregon, and has yet to raise or spend any money. Visit the secretary of state’s campaign finance database to learn more.