Skip to content
So Why Bother Having A Party Platform?

So Why Bother Having A Party Platform? 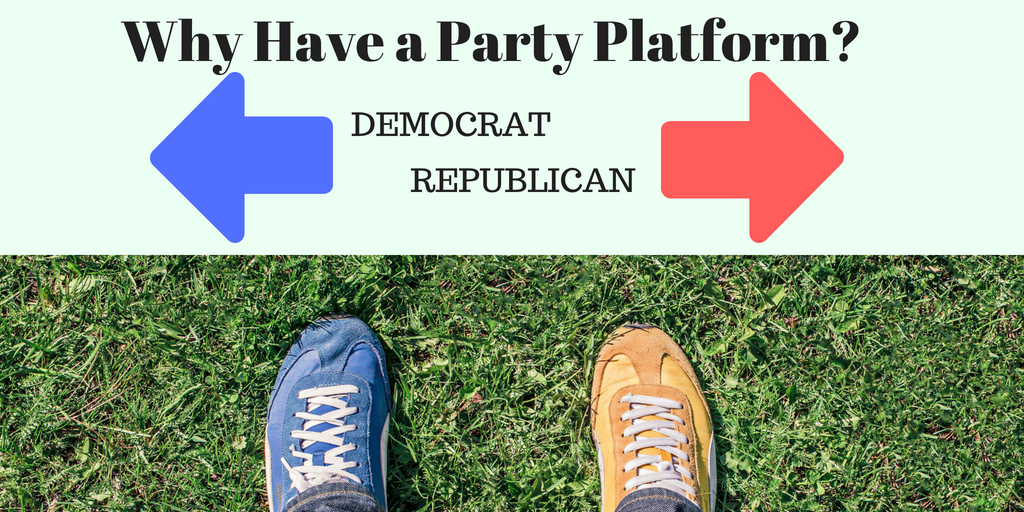 No, really, do elected officials move into their new office on their first day and shout, “Intern, get me a cup of coffee, a cream cheese bagel, and the local party platform right away”?  …I’m guessing probably not.

So, why bother? I mean, have you ever seen a platform committee in action? People practically pull their hair out,  and virtually have arm wrestling matches over where to put the commas. And in the end, does any of it matter?

For one thing, people actually do read party platforms and form opinions about parties based on them.

Just for kicks, let’s imagine that a bunch of random citizens in Washington County, Oregon, decided to form a new party. No longer content to be part of the Whigs or Federalists, this ragtag bunch decides to call themselves the “Democratic Party.” The first thing anybody would want to know about this group is “What do they stand for?” The press would call the newly rented Democratic Party office and ask for a copy of the platform before they even interviewed a single candidate. Because simply knowing the platform helps reporters hold politicians feet to the fire to find out if they really believe what they claim.

Is every member of a party required to believe every last plank of their party’s platform? No, of course not. People are diverse and have different priorities in life. However, by the same token, if you find yourself disagreeing with more of the platform’s planks than supporting them…maybe this is not your party.

Candidates are naturally expected to know the platform as a way to understand the values of their party’s rank and file.

After all, it’s those rank and file members who are going to be cold calling voters, knocking on doors, and donating hard earned cash to the candidate’s election efforts. And face it, if there is no common understanding between a candidate and his or her party, getting help from the members is going to be an uphill struggle, to say the least.

Thus, the platform becomes a kind of background hum to a candidate’s campaign and a politician’s political career. The issues of the day and the crisis of the moment are seen through the lenses of the will of the people and the question of, “How will my constituents and supporters feel about me taking action X, Y or Z?” If a politician knows what the people who put him or her in office believe is right, then he or she can make a decision that is in keeping with the values of the people.

On the other hand, if a politician completely ignores the party platform and uses its planks for a backyard bonfire, that guy or gal can count on a very tough primary fight to keep his or her job. After all, politicians must win their primary elections before they go to face the general election. And a rival who knows the party values better, and can convince folks he or she stands for those values and the incumbent doesn’t–that makes for a rather though primary contender.

So, yes, platforms matter. Every plank is a value, a cause, a conviction, that some if not all, party members are willing to fight for.

The platform defines us and shapes how we as Democrats behave in office and out of it. I am proud to say, I am a Democrat and if you want to know why you can just look at our platform and you’ll see what I stand for.